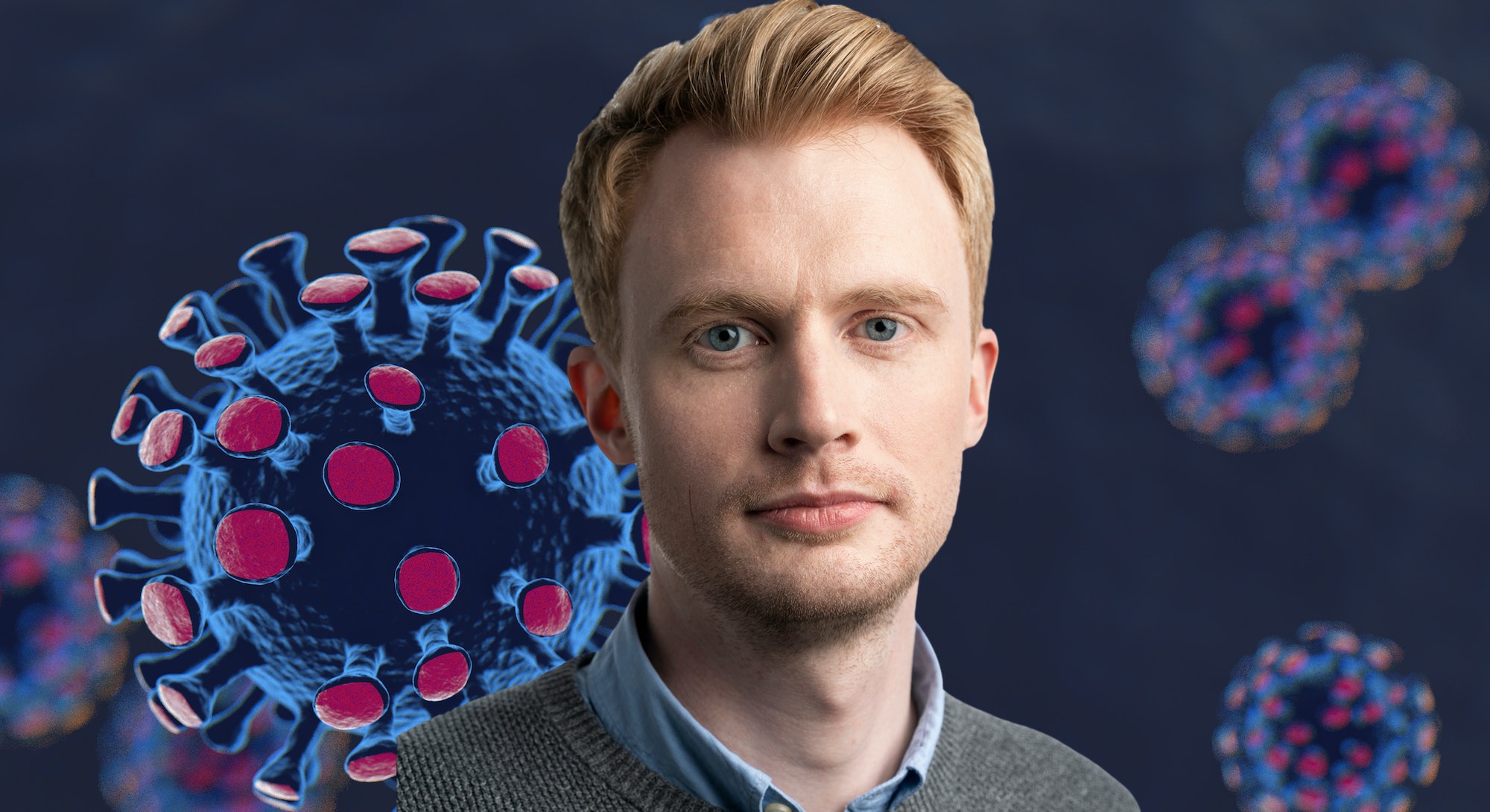 Has there ever been a more prescient book publication?

Adam Kucharski is an epidemiologist and infectious disease expert at the London School of Hygiene & Tropical Medicine. In his research, he uses mathematical models to understand how a disease spreads, and, consequently, how to control it. He worked on real-time analysis of the 2013-'16 Ebola epidemic in West Africa.

He is also the author of a new book, The Rules of Contagion: Why Things Spread – and Why They Stop. Kucharski was putting the finishing touches on his book before the world had ever even heard the term Covid-19 — timing that seemed guided by a godly fate.

In the book, Kucharski explores what spurs on contagion. Beyond just disease outbreaks, the book lays out how the same principles that guide infectious disease control can be applied to other issues that plague modern life, such as misinformation, gun violence, and financial crises. His book acts as an accessible explainer on what, at first blush, may seem like thorny and impenetrable concepts, to help anyone understand what exactly is happening to the world right now.

The following interview, edited for clarity and brevity, is part of Inverse’s FUTURE 50 series, a group of 50 people who will be forces of good in the 2020s.

Your book came out just as the pandemic was beginning to take hold across the world; what did that feel like?

It was a massive coincidence. It felt surreal actually, in particular because the book came out in the UK when it was in that really early stage.

We [at the London School of Hygiene & Tropical Medicine] were doing a huge amount of work trying to understand what was happening. So, even on the publication dates, I was very much distracted by the data that was coming in. I didn't actually go to a bookshop to see my book until summer, just because so many things came up.

Revisiting the book has been interesting, knowing that I had signed off the book before the pandemic even began. It starts with another pandemic that had a second wave; it talks about a lot of the issues around tracking and privacy and how that can help us inform control.

A lot of these themes are quite universal, particularly in the early stages, when people were trying to grapple with these new ideas and terms. It seems lots found the book quite helpful for making sense of the new world we found ourselves in.

“We have a duty to engage with the public.”

Do you have any reservations about the book not coming out earlier, given that some of its content focuses on how infectious disease spread might be curbed?

As an author, you always want something you've put out to contribute usefully to the current debate. Some of the issues in the book, in particular things like misinformation, were really inspired by what we were seeing in the political and vaccine world in the earlier years.

But a lot of the themes around disease are things that you could have said a few years ago. And those are going to be problems that will translate into the future. You could argue that the book came out slightly too early, because it doesn't actually address Covid-19 specifically.

For me, particularly as some of the new terminology was emerging, I was glad I could put something out that could act as a useful primer.

It seems mathematical terms, such as the "R" number and growth rate, have entered everyone’s everyday vernacular. How does it feel, seeing the general public become more mathematically literate?

It's actually been quite refreshing from a public engagement point of view, because I can now go into a lot more complexity than I can usually get away with.

When I gave talks about diseases in the past, I would introduce the reproduction number, and that would be about as far as I’d go. And now, I can have quite detailed talks with journalists about the nuances of super spreading, or about features of delays in data — things that were probably quite boring and niche a year ago.

And it's a good thing, because these concepts aren't as opaque or complicated as they’re made out to be. Really, a lot of these terms are just ways of thinking about the world, that can make patterns that look a bit less odd. And it's really nice to see that people now have that toolkit to help them negotiate all this new data.

A lot of your work revolves around the application of math to real-life issues, and your Ph.D. was in applied math. Did you always love math?

I was always very interested in puzzles and problem-solving; just trying to understand the underlying patterns and rules behind things.

And as I became interested in aspects of biology and the natural world, I found that mathematics could be a very useful set of tools — a structured way of understanding those processes.

During university, I did an internship in finance, which is another industry where math has been used (and in some cases misused) for understanding what's going on. But epidemiology is a discipline where math has been crucial for taking what could be a lot of uncertainty and confusion, and in a structured way, making better use of that information. For me, it's been a transition from a love of puzzles when I was younger to now a fascination with biological puzzles.

It’s good seeing that awareness of what math can be valuable for; a lot of people have quite a narrow view of what math can do. I’ve received feedback from people who have appreciated being able to convert bits of scattered information into something more useful, using even just back-of-the-envelope calculations.

A lot of our work early on wasn't these super-complicated models; it was just finding clever ways to synthesize data to get rough estimates. And we knew that, a couple months later, someone would have a much better, more precise estimate. But if we could get something rough out there quickly, there’s a period where you can be very useful in real time.

One of the biggest issues that has accompanied the pandemic is not just the spread of disease but the spread of misinformation, particularly through social media. How do you suggest we fight it?

There's certainly a lot of parallels between the two. For example, just as we see with Covid-19, there are these amplification events.

And we can think in terms of how we might approach the control of a disease. A few years ago, a lot of the focus on misinformation was around this notion that we could somehow remove it. And, like infectious disease, that would be the equivalent of me saying, “Well, just go and find all the cases, isolate them and you’ve solved your problem.” And, of course, that works on paper. But it doesn’t work in reality — especially online, when the timescales are just so fast.

What we've begun to see is changes to the way things are shared, such as posts being flagged as misinformation, to potentially reduce their transmission ability. One big shift we’ve seen during the pandemic has been pre-emptive messaging. When searching for anything Covid-19-related, you’re exposed to more reliable information sources straight away. So, it's almost like a vaccination, meaning you just reduce susceptibility in the first place. And the great thing about a vaccine-based approach is you don't have to mess around with people's social interactions, or interrupt what they're doing. It can just create a background of reduced susceptibility, which means the outbreak is less of a problem in the first place.

There’s been a lot of excitement around this approach building for a while, but it probably took a pandemic for it to be tried out. For politics, a lot of debates about how platforms approach it have been quite fraught and complicated. But for a pandemic, which is a major public health problem, it's much clearer — and people are far more willing to take those dramatic steps.

You do a lot of public outreach; do you view it as an essential part of your work?

As academics, particularly in public health where our work has a direct impact on everyone, we have a duty to engage with the public.

Especially during the pandemic, where there are some very difficult decisions that need to be made. And even if you can't give people simple answers, providing them with the information that they need is a really important role that academics should play.

Of course, you must be incredibly busy these days. How are you unwinding?

In the early days, it was pretty much flat out. And it became clear that it wasn't sustainable, putting in 100-hour weeks. For me, it’s made me think about what I value in my spare time.

Before, I traveled a lot, so having to spend more time in the UK has made me actually just learn much more about the local area. I’ve also valued opportunities to meet with friends, as well as getting back into reading; the things that I did a huge amount of before.

Off the back of the vaccine news, how do you think the rest of the pandemic will unfold? Are you optimistic?

I'm feeling very optimistic. Having three decent sets of vaccine results this quickly is probably the best that people could have hoped for.

It's obviously going to be an incredibly tough winter for a lot of people. Not just because of the impacts of Covid-19, but just the impact on livelihoods, on mental health, on all these other things.

But I think we are in very different shape than we were before, and we can look forward to a better 2021.

After this all (hopefully) plays out, will your next concern just be: When will the next pandemic happen?

The next pandemic is always the thing on our radar.

The response to Covid-19 has made a lot of people rethink their strategies. There needs to be a ton of re-evaluation of how we approach an event like this in future. What does a 21st century response to a pandemic need to look like?

With wider infectious diseases, we'll see lasting effects, too. It has disrupted the dynamics of diseases such as flu and other respiratory infections. And when those viruses come back next year, are those going to be bigger epidemics or are they going to be suppressed? Is Covid-19 going to change the evolutionary dynamics of these diseases?

The pandemic has also revealed a lot of inequality. I suspect those effects are going to be amplified, even once we get a vaccine. There may be parts of the world where not enough people get the vaccine because of the potentially harmful misinformation taking hold.

Adam Kucharski is a member of the Inverse Future 50, a group of 50 people who will be forces of good in the 2020s.