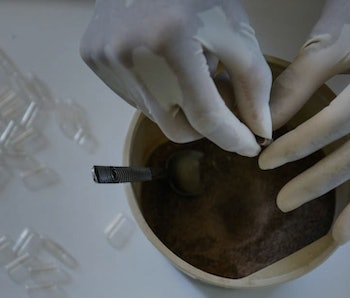 When Brooke Brumfield wasn’t battling morning sickness, she craved nachos. Like many first-time expectant mothers, she was nervous and excited about her pregnancy. She had just bought a house with her husband, a wildland firefighter who had enrolled in paramedic school to transition to firefighting closer to home. Everything was going according to plan until 20 weeks into Brumfield’s pregnancy, when she lost her job at a financial technology startup and, with it, her salary and three months paid maternity leave. After building a new business to support her family, she had clients, but childcare was limited, and her husband’s schedule was always shifting. By the time her baby arrived, “everything was beyond overwhelming,” Brumfield says. “I pretty much felt like a truck hit me.”

Brumfield had heard stories from friends and family about a way to minimize the stress and emotional fallout of the postpartum period: consuming her placenta, the vascular organ that nourishes and protects the fetus during pregnancy and is expelled from the body after birth. The women swore by the results. They said their milk supply improved and their energy spiked. The lows caused by plummeting hormone levels didn’t feel as crushing, they explained.

Brumfield enlisted her doula who, for a fee, would steam, dehydrate, and pulverize her placenta, pouring the fine powder into small capsules. She swallowed her placenta pills for about six weeks after delivering her daughter. She said they helped her feel more even, and less angry and emotional. When her milk supply dipped, she says, “I re-upped my intake and [the problem] was solved.”

Social scientists and medical researchers call the practice of consuming one’s own placenta placentophagy. Once confined to obscure corners of alternative medicine and the counterculture’s crunchier communities, it has been picked up by celebrities (Kourtney and Kim Kardashian, January Jones, Mayim Bialik, Alicia Silverstone, Chrissy Teigen) and adopted by the wider public.

Although there are no official estimates of how many women ingest their placenta after delivery, the internet is increasingly crowded with placenta service providers — preparers of pills, smoothies, and salves to support new mothers in the slog to recovery. But the purported benefits are disputed. Depending on whom you ask, placenta-eating is either medicine or a potentially dangerous practice based on myth. How did this practice go mainstream, despite a lack of reported scientific or clinical benefits? The answer may say much more about the world new mothers live in than it does about the placenta.

In any doctor’s office or primary care setting, a provider treating a patient will often mention new research that supports a recommended treatment. A pregnant woman diagnosed with preeclampsia, for example, might learn from her health care provider that low-dose aspirin has been shown in recent studies to reduce serious maternal or fetal complications. But the basis for placentophagy, a practice that lies beyond the boundaries of biomedicine, is a 16th-century text.

Li Shizhen’s Compendium of Materia Medica, or Bencao gangmu, first published in 1596, is a Chinese pharmacopoeia and the most celebrated book in the Chinese tradition of pharmacognosy, or the study of medicinal plants. It appears on the websites of placenta service providers and in the pages of the standard references for practitioners of traditional Chinese medicine (TCM), a millennia-old medical system with a growing global reach.

A physician and herbalist, Li drew on his empirical experiences treating patients but also on anecdotes, poetry, and oral histories. His encyclopedia of the natural world is a “textual cabinet of natural curiosities,” according to historian Carla Nappi’s The Monkey and the Inkpot, a study of Li’s life and work. Containing nearly 1,900 substances, from ginseng and peppercorn to dragon’s bone and turtle sperm, Li’s book describes dried human placenta as a drug that “invigorated people,” and was used to treat impotence and infertility, among other conditions. For advocates of placentophagy, this book serves as ethnomedical proof of the long-standing history of the practice — and by extension, its efficacy and safety.

But like many claims to age-old provenance, the origins of placentophagy as a postpartum treatment are disputed. Sabine Wilms, an author and translator of more than a dozen books on Chinese medicine, scrutinized classical Chinese texts on gynecology and childbirth and told me “there’s no written evidence at all of a woman consuming her own placenta after birth as a mainstream traditional practice in China,” even if formulas containing dried human placenta were prescribed for other conditions, as described in Li’s book.

Beyond Li’s 400-year-old encyclopedia, evidence of postpartum placenta-eating is nearly impossible to find in the historical record. Women’s voices are notoriously difficult to unearth from the archives, and even in the 19th century, the details of childbirth and what happened to the placenta went largely unreported. But when two University of Nevada, Las Vegas anthropologists pored over ethnographic data from 179 societies, they discovered a “conspicuous absence of cultural traditions associated with maternal placentophagy.”

The earliest modern recorded evidence of placentophagy appears in a June 1972 issue of Rolling Stone. “I pushed the placenta into a pot,” wrote an anonymous author, responding to the magazine’s call asking readers to share stories from their personal lives. “It was magnificent — purple and red and turquoise.” Describing her steamed placenta as “wonderfully replenishing and delicious,” she recounted eating and sharing it with friends after delivering her son.

Raven Lang, who is credited with reviving “the oldest known and most commonly used recipe for postpartum placenta preparation,” witnessed placentophagy while helping women as a homebirth midwife and TCM practitioner in California in the early 1970s. These women lived off the land, she explained, and might have drawn inspiration from livestock and other animals in their midst.

It wasn’t long before placentophagy made its way beyond California’s hippie enclaves. In 1984, Mary Field, a certified midwife and registered nurse in the UK, recounted eating her placenta, an “unmentionable experience,” to ward off postpartum depression after the birth of her second child. “I remain secretive,” Field wrote, “for the practice verges on that other taboo — cannibalism — as it is human flesh and a part of your own body.” She recalled choking down her own placenta. “I could not bear to chew or taste it.”

The rise of encapsulation technology, developed for the food industry and picked up by placenta service providers in the early aughts, put an end to visceral experiences like Field’s. No longer must women process their own placenta or subject themselves to its purported offal-like flavor. Tidy, pre-portioned placenta pills resembling vitamins can be prepared by anyone with access to a dehydrator, basic supplies, and online training videos.

The boom in placentophagy highlights a longstanding puzzle for researchers. Almost every non-human mammal consumes its placenta after delivery, for reasons that remain unclear to scientists. Why did humans become the exception to this nearly universal mammalian rule? For Daniel Benyshek, an anthropologist and co-author of the UNLV study that found no evidence of placentophagy being practiced anywhere in the world, the human exception “raises a red flag”: It suggests the reasons that humans have eschewed placentophagy aren’t just cultural or symbolic, but adaptive — “that there’s something dangerous about it, or at least there has been in our evolutionary history.”

Scientific data on the potential benefits and risks of placentophagy is scarce, but a few small studies suggest that any nutrients contained in cooked or encapsulated placental tissue are unlikely to be absorbed into the bloodstream at concentrations large enough to produce significant health effects. Whether and in what quantity reproductive hormones such as estrogen survive placental processing has been little studied, but ingesting them after birth could have negative effects on milk production and may also increase the risk of blood clots.

Yet placental encapsulation services — which remain unregulated in the US — have found a receptive audience of American consumers. (The food safety agency of the European Union declared the placenta a “novel food” in 2015, effectively shuttering the encapsulation business on the continent.) Mostly small and women-owned placenta service businesses position themselves as an alternative to a highly medicalized, bureaucratized birthing process that has often neglected the needs of women. Postpartum checkups focus narrowly on pelvic examinations and contraceptive education. One survey of US mothers found that one in three respondents who received a postpartum checkup felt that their health concerns were not addressed. In contrast, placenta service providers speak the language of empowerment.

That language can resonate with new mothers like Brumfield, who face overwhelming pressures to care for a newborn, nurse on demand, manage a household, and return to work amid anxieties about postpartum depression, dwindling energy, and inadequate milk supply.

“In some ways, placenta consumption is motivated by a desire to perform ‘good’ mothering,” wrote scholars from Denmark and the United States in a paper on the emergence of “the placenta economy.” It reflects “the idea of maternity as a neoliberal project, in which new mothers are responsible for their own individual well-being as well as that of their babies,” they added.

Meanwhile, rates of postpartum depression keep climbing, maternity leave policies are stingy, and child care costs are often prohibitive. It’s easy to see why many women would be eager to seek help, real or perceived, wherever they can find it.

Daniela Blei is a historian, writer, and book editor based in San Francisco.

This article was originally published on Undark Magazine. Read the original article here.

More like this
Science
6.28.2022 10:00 AM
How are drugs absorbed in the body? The science of medicine, explained
By Tom Anchordoquy and The Conversation
Science
6.26.2022 11:00 PM
The powerhouse of the cell has a more complicated origin than we thought
By Viviane Callier and Knowable Magazine
Science
6.21.2022 10:45 AM
Ancient stalagmites point to a massive drought that upturned 6th century Arabia
By Allison Parshall
Related Tags
Share: