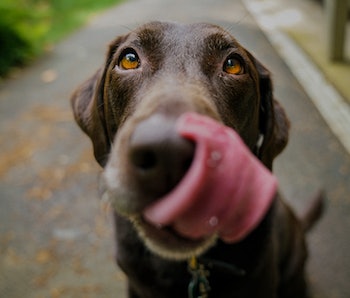 Dog licks have been considered medically beneficial to humans for millennia. In ancient Egypt, dogs were used in healing practices since they believed that dog licks help heal injury or cure disease. Fijian fishermen also allowed their dogs to lick their wounds. And the French have a saying, “langue de chien, langue de médecin,” which translates to “a dog’s tongue, a doctor’s tongue.”

It is also a common belief that it is beneficial for us to lick our wounds because the mouth is home to an abundance of disinfectants or antimicrobial compounds. And, in fact, this common belief does have some truth to it. Wounds heal faster in the oral cavity than on the skin, and research has shown that when human saliva is placed onto a wound, it heals more quickly. In addition to water and mucus, human saliva contains enzymes and antimicrobial compounds that ward off infections, and histatins that speed up wound healing by promoting the migration of new skin cells to the wound site.

Now, research has shown that dog saliva has its share of the good stuff. In a 2018 analysis of saliva from Labrador retrievers and beagles, researchers found that canine saliva contain an assortment of antimicrobial enzymes, proteins such as lysozymes and immunoglobulins, and antimicrobial peptides, which tear holes in bacterial cell membranes. Though these researchers did not find histatins in canine saliva, the genome sequence of dogs indicate that they produce proteins that are quite similar.

Despite these beneficial properties, when you see a dog sniffing another dog’s butt or trying to scarf up something less-than-appetizing, you’ll probably wonder whether it’s safe for your dog to lick you at all — or whether you’ll end up with some sort of bacterial infection. As a microbiologist, I know that a dog’s saliva carries a multitude of microbes, most of which are a normal part of a dog’s life and harmless to both dog and human kind.

But I can’t help but think, where has my furry friend stuck their nose into recently? Even Barack Obama has his doubts about doggie kisses. “I still don’t let Sunny and Bo lick me, because when I walk them on the side lawn, some of the things I see them picking up and chewing on, I don’t want that, man,” he told Wired in 2016.

He’s not wrong: Dogs are known to be carriers of a number of bacteria and viruses that can cause disease in humans: rabies, norovirus, pasteurella, salmonella, and campylobacter, for example. But nearly all cases of disease involve a dog bite or contact with fecal matter.

In 2016, a 70-year-old woman landed in the hospital due to a blood infection with the bacterium Capnocytophaga canimorsus, a bacterium frequently found in the canine oral cavity. The source of infection was likely her Italian greyhound. After two weeks of intensive care and broad-spectrum antibiotics, she recovered fully. The authors of this case report write that, in general, the elderly are disproportionately prone to infection due to age-related immune dysfunction and increased pet ownership. Still, the chances of picking up a bacterial infection from your pet are quite slim.

However, we also don’t know very much overall about the microbes canines carry in their mouths. A study published in PLOS One found that the oral microbiome of dogs is very different than the human oral microbiome. Only 16.4 percent of the microbes identified are shared between dogs and humans. Understanding the canine oral microbiome can help scientists learn about how dogs could be a potential source of pathogens and parasites and how the canine microbiome interacts with pathogens.

My thoughts? Don’t fear your dog’s cute face full of microbes and give them some love. Just be careful with open wounds and mucus membranes. To be scared of your dog’s diverse microbes is like being scared of all the other microbes around you. Most of them are not harmful to us at all.

More like this
Science
5.8.2022 1:00 PM
Should you exercise your dog on a treadmill? Here's what veterinarians say
By Tara Yarlagadda
Science
5.16.2022 10:00 AM
Pig-human heart transplants still have a long way to go
By Andrew Fenton, The Conversation and Françoise Baylis
Science
5.15.2022 7:00 PM
200 years ago, this terror of the Amazon inspired the world’s first batteries
By Timothy J. Jorgensen and The Conversation
Related Tags
Share: