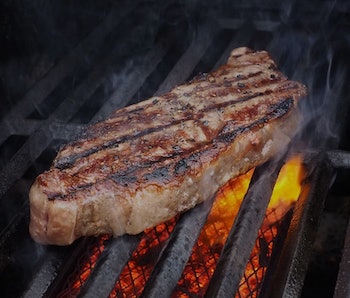 Summer grilling means hauling out a hunk of beef from the freezer and thawing it all day so you can get those perfect charred streaks, the sizzling juices running just so when a knife slices the meat.

Except… that’s actually not the way to grill the perfect steak. In fact, food chemists say procrastination is the way to go, and tossing a steak onto the grill right from the freezer will deliver even more delicious results.

“For years people would think, ‘Geez, I’ve got to spend hours thawing this thing out before I can cook it,’” food scientist Guy Crosby tells Inverse “Well, no. You can cook it, and it can turn out just as good and sometimes even better when you throw it on the grill or in the skillet when it’s still frozen.”

Crosby is a professor of food chemistry at Harvard and the science editor for America’s Test Kitchen. A few years ago he and others cooked up a bunch of steaks to see which turned out better: thawed, as conventional wisdom would have it, or frozen.

The result was surprising. Frozen steaks browned just as nicely, lost 10 percent less moisture, and had thinner strips of overcooked meat between the sear and the pink meaty center. In other words, frozen steaks slapped onto a hot grill made for a better overall steak — practically perfect.

In that experiment, the steaks were first seared in hot oil in a skillet, then transferred to an oven at 275 degrees until an internal temperature of 125 degrees. But the same idea could be applied to your summer grilling, Crosby says. You would simply grill your frozen steaks over high, direct heat until they are browned on both sides, and then put them on low, indirect heat to cook through.

Steaks must undergo two critical chemical transformations to go from a frozen hunk of meat to supreme yumminess. The first is the sear, which is accomplished at very high heat. The browning of meat happens thanks to what’s known as the Maillard reaction — a chemical reaction involving proteins and sugars. With the input of energy in the form of heat, these molecules rearrange themselves to form new molecules, including the aromatic compounds that make steak look awesome and taste amazing. “It only takes parts per million or less of these molecules to contribute a very pronounced flavor,” says Crosby.

But you don’t want the entire piece of meat heated to the point where it’s brown and crunchy. Think about it: The perfect steak should be juicy and tender, which means heating up the inside of the meat slowly. This way, it cooks evenly and it makes it easier for to get the steak right to its bliss point, between the narrow zone of too rare and too well done.

As a steak warms up, a few things happen. The fats held inside the meat will render and turn to liquid, which makes it melt-in-your-mouth good to bite into. It also explains why few of us prefer our steaks still cold and a purplish red rare color in the middle. But heat too far and you start to pay the price in moisture loss. At about 130 degrees, the muscle fibers will begin to contract significantly, pulling them together and pushing water out, says Crosby. The less moisture, the tougher your steak will be.

So, for most of us, a steak cooked to medium rare all the way through, with a good sear on the outside, is the epitome of perfection. This is assuming you have purchased a very high quality, tender cut of meat, like a tenderloin or strip loin; other cuts have different ideal cooking temperatures.

And this is why cooking from frozen is the best way to cook steak. Because the meat is cold, it means the outside can quickly reach the high temperature required for the Maillard reaction without sacrificing the inside’s flavor by way of overcooking. The greater the temperature differential, the less overcooked meat there will be between the sear and the center, and the more tender your steak will be overall.

Crosby recommends freezing steaks uncovered on a parchment-lined baking sheet until they’re frozen solid, then wrapping the steaks in plastic and storing them in a freezer bag until you’re ready to start grilling. This dries out the surface of the steak, which makes the Maillard reaction happen faster, since that excess moisture doesn’t have to be boiled away before it gets going.

Also, your steak will be better the less time it spends frozen, so don’t just fill your freezer and forget about it. Meat left in the freezer will develop ice crystals both on the exterior and on the inside of the tissue as it goes through mini-cycles of thawing and refreezing. These crystals damage the muscle fibers and permanently remove water from them, resulting in a steak that is drier and has a less satisfying texture.

Never-frozen steak will probably always be king, but briefly frozen steak can be just about is good, if you know what you’re doing and understand a little bit about what you’re working with.

This story was originally published in 2017 by contributing writer Jacqueline Ronson. Follow Ronson on Twitter at @jacsrons.

More like this
Mind and Body
7.30.2022 2:00 PM
Why does eating pineapple sting? A food scientist explains the chemistry
By Elana Spivack
Science
7.27.2022 11:00 AM
The Webb Telescope might confirm if one of Saturn’s moons has ingredients for life
By Kiona Smith
Science
7.30.2022 7:00 PM
The latest deadly threat to polar bears? Your trash
By Thomas Scott Smith and The Conversation