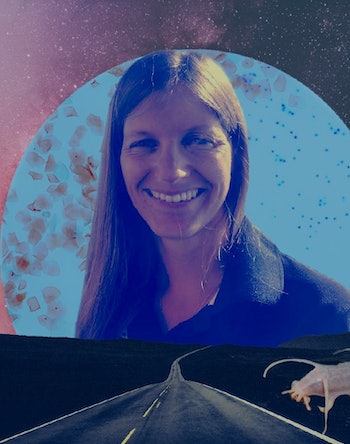 When I first corresponded with Lucy Woodall, Ph.D., she was working aboard a polar research vessel in the Weddell Sea off the coast of Antarctica. And in her most recent email, she was onboard the Ocean Zephyr in the Indian Ocean, fresh from exploring the shallow waters off the island of Aldabra.

Her life takes her to physical and geological limits — the extremely isolated and extremely deep — but what remains consistent is her dedication to the work. She feels a responsibility for the sea, and after a decade of research, she’s not done asking questions.

See also: “The Ocean’s Tipping Point Has Been Reached,” by Dr. Lucy Woodall

“I must have saltwater, not blood, running through my veins,” says Woodall, 41. “I love being on ships. I find the movement relaxing and the open vistas rejuvenating.”

The Indian Ocean is the world’s most mysterious, and least-protected, ocean. The “First Descent” missions are designed to change that. Woodall will oversee the first of 50 Indian Ocean descents, which are scheduled out until October 2020. The true conclusion of this expedition is the 2022 State of the Indian Ocean Summit in Oxford, England.

Woodall’s career has been spent venturing to places few humans have ever seen, and she’s shared what she has found with policymakers who can protect the world’s oceans. From the seabed, she has a unique perspective about the ocean and its future in the next decade and beyond.

“I have so many how-why-what questions about life in the ocean,” Woodall emails from Aldabra. “Normally, I come to sea with a large, overarching question, and many small ones, and leave with more questions than answers — but it will always be this way because the ocean is so complex.

“Complexity can be scary, as it is difficult to know where to start, but it is also the reality of most processes on the planet. I am motivated to understand more of the complex interactions of the ocean. These are vital to understand, so we can apply appropriate protection and management processes.”

Once she understands, Woodall can engage in the next step essential to her process: sharing. That’s why she engages with science communication; why she mentors students in Oxford and takes part in a myriad of science education outreach programs.

Woodall says she’s aware of the privilege inherent in studying the ocean, a behemoth she says is the “backbone of the planet.”

“I have been fortunate enough to visit some of the most wonderful places and be the first human ever to see parts of the seabed,” Woodall says. “Therefore, I have a responsibility to continuously explore, ask questions, provide detailed analysis, and draw conclusions, so that those in power can ensure we sustainably manage and conserve the ocean for generations to come.”

Aldabra, the world’s second-largest coral atoll, is one part of the Seychelles archipelago. This month, Woodall and her team piloted submersibles deep into the ocean to document life there, venturing some 500 meters (or 1,640 feet, which is about three-tenths of a mile) below the surface, recording environmental conditions and noting evidence of human activity and use.

She’s on the hunt for new species and is documenting evidence of climate change and its ripple effect on marine life. Little is known about the Indian Ocean at the depths Woodall is exploring.

Along the way, hammerhead sharks swam below the two-person glass-topped submersible while a giant, solitary Aldabra tortoise trawled the coastal waters for its next meal. She’s already seen human damage in the once pristine waters: fishing lines caught on underwater steep walls; floating garbage on the surface.

“Equity is an important factor to me, so all expeditions I run are co-produced with host nations, and I engage with stakeholders from the start and include local people on expeditions,” Woodall says.

“Leaving a legacy in these special places is as important as the individual scientific outcomes.”

In early March, the mission made news when Stephanie Marie, a Seychellois scientist working with Woodall, became the first person from Seychelles to explore the deep water around her home. Woodall found herself in the news again at the end of March, when she broadcasted live from 418 feet down on Good Morning America.

Woodall explains that her favorite part of being out at sea conducting science is running into the unexpected. She’s always finding new and interesting questions to ask, and meeting brilliant scientists to collaborate with. Each cruise, staffed by multidisciplinary experts, challenges her to think about how ocean systems work, and how these systems are affected by humans.

While the Indian Ocean and the Weddell Sea might seem disjointed, the questions she’s asking in these places are united by a theme: How has the impact of climate change affected marine life? How do organisms live so far below?

When Woodall spent 45 days traversing to the Weddell Sea, the only consistent thing in her life were the meal times. She would occasionally work through the night — she was a member of an all-women biology team of three — to understand how life on the seafloor changes after an ice shelf collapses. A giant iceberg broke off the Larsen C ice shelf in 2017, a continuation of the thinning and rapid disintegration of the Antarctic ice shelf. The light that spread onto the seafloor after the break, says Woodall, was the first light seen on that part of the Earth in millennia.

“Antarctica is a magical and special place,” Woodall reminisces.

The hardest part of being at sea, she says, is the preparation. Most of the places she explores are extremely remote, so forgetting the smallest thing can be a problem. She makes lots of lists, double-checking everything. Days on the ship don’t include much downtime, but when she does have a rare moment of freedom, it’s spent playing board games, chatting with other scientists, reading, and taking in the expansive ocean vistas.

The sacrifices don’t feel like sacrifices. Her two main motivations — curiosity and a sense of loyalty to the ocean — drive the mission.

Dr. Lucy Woodall is a senior research fellow at the University of Oxford and the principal scientist at Nekton. As a marine biologist, she examines the processes that drive biodiversity in the ocean and the impact of human activities. She is passionate about ocean health, and her work on microplastics was the first to reveal the ubiquity of this pollutant in the ocean. Follow her on Twitter @water_nomad. Woodall is a member of the Inverse Future 50.