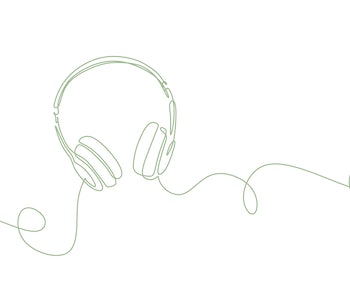 The science podcast is underrated. While the longform interview podcast gets the status, the daily news podcast gets the mentions, and the dreaded "comedy podcast" generates froth from the mouths of fanboys whose enthusiasm makes sensible people run in the opposite direction, the humble science podcast is quietly the one you should look to first when trying to fill your brain with something other than the task at hand, whether that be dishes, vacuuming, or completing that 12th mile before work.

Below are science podcast recommendations for the year 2020 from the editors and writers at Inverse. If you've taken this strange period (this is currently being written in the time of Covid-19) as an opportunity to download a podcast app (can we suggest the public radio-made Pocket Casts?) and fill it with shows that will shape how you see the world, you could do much worse than adding these five podcasts to your app first.

It'd be easy to make a list of twenty science podcasts and fluff up the descriptions with blog slurry, but an obviously overwhelming list of podcast recs is best left to others. We are after thoughtful suggestions for shows we actually want you to listen to today or this weekend.

We hope the below pods fill your brains with substance now and in the weird days ahead.

OK, so Ologies isn’t a new podcast. It’s not underrated. It’s not unpopular. It is funny, wickedly smart, and loyal to the scientific exploration of a new topic each week. It’s a little too cute and self-satisfied and career-focused (ruthlessly edited) and fandom-focused (merch!) for a certain type of listener. All of that said, Ologies strikes the right balance between the talky personality-based podcasts that fill large halls with cheering fans and the sort of essential-feeling intellectual podcasts that don’t fill auditoriums but would leave a hole in our hearts and brains if they ever left. Ologies has covered topics as varied as the future (“Futurology,” January 7, 2020) to watches (“Horology,” October 18, 2017). Ward, who has the broadcast entertainment CV you’d expect from a polished podcast host, is somebody you will love to go deep with on a topic every Tuesday. She’s great for when you need to mentally disappear for a while. —Nick Lucchesi

Despite being named after a class of mollusks, this podcast is actually about the science and history of food and drink. Gastropod has been going strong for six years, a testament to how goddamn interesting it is.

A recent episode from March 10, 2020, resonated with me particularly, because the subject is near and dear to my heart: Liquorice. Some people hate it, some people, myself included, cannot get enough. The stronger and saltier the better. I am known to gulp down entire fistfuls of the Swedish liquorice salmiak (that’s liquorice flavored with ammonium salt for the uninitiated. It’s delicious, I promise). But did you know that liquorice begins its life as a root that is 50 times as sweet as sugar? Neither did I.

Each episode is a little under an hour and features a veritable cornucopia of experts, so you’d do well to stick one on while preparing something in the kitchen yourself. —Claire Cameron

You probably have heard of Galapagos tortoises, the giant long-lived species native to seven of the Galapagos Islands. But you probably have not heard of Judas goats. They also live on the Galapagos Islands, but have earned a very different reputation. Goats were originally brought to the islands by pirates and whalers in the 1500s and now they’ve gone fully invasive — eating up swaths of the islands; destroying forests. Conservationists hate the goats. So they use Judas goats — goats with radio collars — to find other goats and (there’s no delicate way to put this) shoot them from a helicopter.

It’s a bit of a moral conundrum: Don’t goats that have lived somewhere for more than 500 years, and not by choice, have a right to munch grass in the sun too? And it’s a conundrum I’ve been thinking about for six years, ever since I listened to the three-part Radiolab series “Galapagos.” Radiolab is the Tom Hanks of science podcasts — it’s mainstream, sure, but it’s consistently great. Radiolab combines empathetic story-telling with sincere curiosity, and you’ll find yourself considering something you never thought you’d be considering so often — like goats. —Sarah Sloat

Planet Money is secretly a science podcast. They’re doing great coverage of the “virus economy.” But what you should listen to right now as a form of true Covid-19 escapism is their episode: “The Vodka Proof.”

Essentially, this episode runs you through the science of vodka creation. That science reveals a larger truth, that will devastate you if you are a vodka snob. At the risk of giving away too much: there’s probably more marketing behind “premium” vodka than there is actual distilling science.

What makes this pod great is that it highlights real, hard science and actually applies it to your life. You’ll go to a vodka distillery, listen to the hosts sample different brands (and make their own), and get a really interesting story along the way that explains why you’re being duped into buying premium vodka. That really ties it all together. —Emma Betuel

Science Vs., with Wendy Zukerman

From the everyday useful to the historical to the flat-out weird, Science Vs. has the answers to the science question you’ve always pondered, but never figured out. Is there anything fact-based behind essential oils? Why are peanut allergies on the rise? How do placebos work?

The show also delves into whimsical but science-heavy topics you probably never even considered, like the secret lives of ants.

With a good dose of humor and a whole lot of facts, the show has the answers — it’s produced by a self-proclaimed “team of friendly fact-checkers that blow up your firmly held opinions and replace them with science.” Lately, that means debunking coronavirus myths about chloroquine, ibuprofen, and what it’s really like on the front lines of care. And if the hard-hitting science doesn’t get you, Wendy Zukerman’s charming interviews with scientists, and a knack for making facts fun, surely will. —Nina Pullano

I know, I know… Armchair Expert, the runaway podcast hit from actors, Dax Shepard and Monica Padman, gets a lot of flack. And it’s true, sometimes Shepard goes off on mind-numbing tangents about his anthropology degree or long-winded theories about human behavior. But Armchair Expert also explores often taboo topics from addiction to sexuality, and conversationally discusses the science behind what makes humans human.

Shepard and his cohost, Padman, ask blunt questions others might be afraid to ask and approach every topic with vulnerability and intention. They also recruit a roster of fantastic experts. You can hear how psychotherapist Esther Perel enables couples to optimize communication or how organizational psychologist Adam Grant influences how the world’s biggest companies hire and fire employees. It’s enlightening, often very funny, and refreshingly candid. —Ali Pattillo