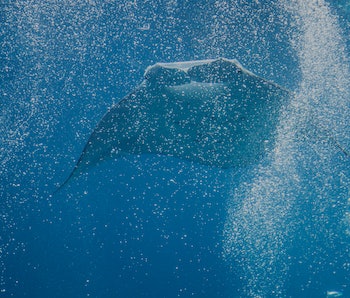 The world’s most amazing story of survival is rarely told. When a massive asteroid collided with Earth about 65 million years ago, the scene that followed was apocalyptic beyond even the imagination of Roland Emmerich. The cascading effects of the impact of space rock responsible for the Chicxulub crater were almost unsurvivable. The projectile in question is estimated to have released a billion times as much energy on impact as the atomic bombs that hit Hiroshima and Nagasaki. If you were close enough see the asteroid impact, you would have died right away in the blast. If not, the earthquake that followed — as big as all the world’s earthquakes of the last 160 years combined — might have got you. If not that, a 1000-foot-high tsunami might have drowned you. If not that, the 600 mph wind could have sent you sailing towards extinction.

But some animals survived. They may have wished they hadn’t.

The planet became dark as ash and debris blacked out the sun. Then, after a while, the skies cleared a bit and acid rain fell. Plants withered and died. The world got cold and stayed cold as the snows came. When they receded, the greenhouse gases superheated the planet.

We usually talk about this event as one of death and destruction, but it’s also one of resilience and survival. The impact and its aftermath killed off an estimated two thirds of species on Earth — but what’s really amazing is that some plants and animals found a way to live on. Every living thing on Earth today owes its existence to these survivors, as they went forth and multiplied into the brave new world, paving the way for the rise of mammals, and ultimately, humans. Here’s to the survivors that made that possible.

We think of this event as the extinction of the dinosaurs, but not all of them died. A few among the bird-like species in the clade maniraptora lived on, and no one knows quite why. The latest theory is that dinosaurs with beaks were able to stay fed on seeds during that nuclear winter. Plants die quickly without sunlight, but seeds can hang out for centuries. Animals who could crack them open and feast on the nutritious insides had a pretty serious advantage in the Cretaceous apocalypse. From those survivors descend all the magnificent varieties of bird life on the planet today.

Crocodiles have the impressive distinction of being the only type of land animal weighing more than 50 pounds to survive the Cretaceous–Paleogene (K-Pg) extinction. Their semi-aquatic life certainly was a help, but also crocodiles are just pretty badass in general. The reason crocodiles have more or less looked the same for 83 million years is that they’ve stumbled on set of characteristics that just works really well. Why work for the environment when the environment is working for you?

The asteroid impact wrecked havoc on the oceans, too. Lack of sunlight is a bummer for seaweed, and all the creatures all the way up the food chain. Changes in temperature, light, and acidity would have all made survival a dicey affair. While many species of shark went extinct, some survived. It’s thanks to their grit that today you can follow sharks on Twitter and get pumped for Shark Week.

The reason manta rays, devil fish, and sawfish look so ancient and prehistoric is because they are. These beasts of the deep figured out a way to stay fed during the dark times and come out the other side. And that’s pretty rad, because they’re pretty rad.

Mammals coexisted with dinosaurs throughout the Mesozoic, but nearly all of them were small, mousey things that feasted on insects, tiny reptiles, and other scraps deemed too much trouble by larger and more formidable predators. Still, when it came to surviving the apocalypse, these guys had it relatively good. It could be that many of them survived by burrowing, and therefore avoiding the worst direct effects of the impact blast. In the aftermath, huge ecological niches were left open by the demise of the dinosaurs, and it’s the mammals that most successfully fanned out and colonized this new world. Over millions of years of evolution, these tiny survivors became African elephants, woolly mammoths, polar bear, and even blue whales.

Some studies suggest that the common ancestor of all primates alive today lived before the great dinosaur extinction. That means that small, lemur-like creatures managed to survive the aftermath of the asteroid impact, and go on to give rise to the macaques, the bonobos, the gorillas, the chimpanzees, and ultimately, the humans. Those early primates are your ancestors, and they carried pieces of your DNA. How ironic that these resilient creatures should survive Earth’s greatest catastrophe only to pass on the genes that would one day build the species that would be the cause of the next great extinction.