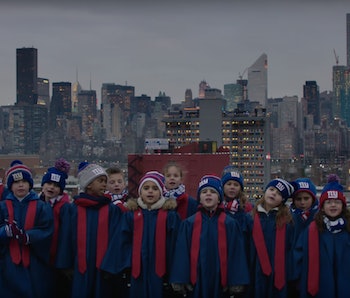 #PuppyMonkeyBaby and Gut Guy set a high standard for Super Bowl ad weirdness, but nothing was more out there than the NFL’s “Super Bowl Babies.” In the video, choirs of jerseyed youths, the supposedly inevitable result of 49 Super Bowl-induced hookups, go on to sing Seal’s “Kiss From a Rose,” an ode to their parents’ post-victory lovemaking. It’s an uncomfortable thing but not an entirely implausible thing, at least not scientifically: Multiple studies have shown that sports victories are an instant testosterone boost.

Not that the NFL appears particularly concerned about the scientific validity of its claim, opening with this vaguely believable statement: “Data suggests nine months after a Super Bowl victory, winning cities see a rise in births.” The NFL hasn’t exactly made this “data” public, so it’s up to us to hypothesize if — and if so, how? — this could be true. The internet isn’t really buying it — and really, who can really get it up in a post-nacho post-blue cheese sauce haze? — but the available science literature linking sports and hormones suggest there could be some truth in their claims.

Simply put, watching sports — especially sports victories — causes testosterone to spike. Studies have shown this numerous times: One study from the University of Valencia found higher testosterone levels in Spanish fans watching the 2010 World Cup between Spain and the Netherlands, echoing the results of an earlier study on soccer fans in 1998. Taking these findings a step further, scientists at the University of Missouri found that it’s team victories over rivals that count when it comes to boosting testosterone levels in the blood.

As is the case with all hormones, testosterone’s exact role is hard to pin down, but it’s known as the male sex hormone for a reason: Higher levels have frequently been linked to a healthier sex drive, and low libido in men is sometimes treated with testosterone supplementation. The relationship between hormone levels and horniness, it should be understood, is not exactly linear — too much testosterone could actually make men go limp — but there’s certainly reason to believe that a bit of a spike could result in, well, a bit of a spike.

Are there going to be a disproportionate number of young Peytons born in Denver this November? Unless the NFL releases its data, it won’t be easy to predict. But at least the scientific literature can provide the parents of future Super Bowl Babies with a hypothetical explanation for their behavior, which their justifiably creeped-out offspring will, thanks to this bizarre campaign, inevitably demand.