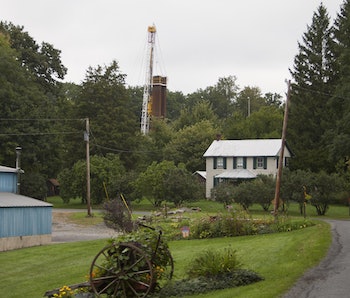 Hydraulic fracturing has boomed in the US over the past decade, but unless you live near it, you may not realize just how close fracking wells can be to homes and schools. In Colorado, the wellbore – the hole drilled to extract oil or gas – can be 500 feet from someone’s house under current state rules. In some states, like Texas, drilling can be even closer.

For people living in these areas, that means noise, pollution, and other stressors that can harm physical and mental health.

People with homes near fracking operations describe vibrations that can make sleep difficult and disturb their pets. Truck traffic around well pads adds to the noise, dust, and other airborne pollutants, creating another layer of industrial disruption.

One woman I spoke with had a 30-foot-high sound wall put up around her property, but the parade of semi-trucks at all hours still rattled her home, and the sound wall couldn’t keep out the noise. When she opened her bedroom curtains, all she saw was a brown wall where she used to have mountain views.

As a social scientist who studies extractive industries and their environmental justice and health impacts, I have spent years in communities with unconventional oil and gas activity, visiting homes, and well sites.

My research shows that living near fracking sites can lead to chronic stress and self-reported depression. These effects often relate to systemic problems associated with the industry.

Consequences of the fracking boom

The boom in hydraulic fracturing started around 2010 and made the US the No. 1 producer of hydrocarbons globally. In Colorado, fracking has since helped quadruple oil production and increased natural gas production.

But that growth has come with consequences. By 2017, researchers estimated 4.7 million people lived within 1 mile of an unconventional oil or gas well in the US.

Health studies have found respiratory difficulties like coughing and wheezing in people living and working near fracking sites. Other studies have found increases in endocrine-disrupting chemicals that can affect pregnant women and children, including raising the risks of birth defects and childhood cancers.

Emissions of methane, a potent greenhouse gas that contributes to climate change, have also spiked around oil and gas activity.

Less well understood have been the effects on mental health.

In a new study on the mental health effects, I examined multiple communities across northern Colorado, surveyed hundreds of households, and visited people’s homes, schools, and well pads.

Two drivers of stress and mental health harm stood out:

Previous studies have suggested links to depression and lower quality of life, as well as social-psychological impacts, such as increased tensions within communities, but these studies typically used surveys or government data. This new research looked closer to people’s experiences.

Imagine you live in northern Colorado. A company notifies you that it will start drilling in the open space in your subdivision that you can see from your backyard or deck. You try to find information about the health or environmental risks, but that information is locked behind a publisher’s paywall or it is buried in hundreds of pages full of technical language.

One of the people I interviewed, a 45-year-old teacher who has lived in his community his entire life, talked about stress from the uncertainties of living near fracking: “What’s stressful is the unknowns and how this industry is operating behind a curtain all the time. … When you don’t know the chemicals they’re pumping down. You don’t know where they’re getting the water. You don’t know how much these tanks are leaking. … To me, that is stressful, the not knowing.”

Other people reported feeling stress over uncertainties about long-term impacts. A retired former city worker said: “We’re lab rats right now. They’re learning about it as they’re going. … We don’t know what the impacts are going to be 20 years down the line.”

Many people feel powerless to do anything about it. In Colorado, people typically have only three minutes to talk during public meetings, while the companies have more time to present their cases.

A middle-aged woman living with a well pad about 1,000 feet from her deck explained why public meetings felt so exclusive: “This was a public hearing … and they turned it over to [an oil company] to give their slideshow. … [The oil company] proceeded to do about a two-hour presentation, so there was no time for public input. So four or five people out of a hundred people who wanted to protest got a chance to talk. It’s very hard to be heard.”

These patterns emerged across my data.

About 90% of the people I interviewed reported increased, chronic stress-related to nearby fracking operations, and 75% reported feeling long-term depression – particularly because of the uncertainty about the impacts and feeling powerless to stop it.

What can be done about it?

Governments could help address some of these systemic problems fairly quickly.

The first step is to provide easy-to-understand, accurate information about the environmental and public health risks, as well as the economic risks and benefits.

Governments can also give people more meaningful opportunities to participate in zoning and other decisions about how, when, and where hydraulic fracturing takes place.

Fixing the health and environmental risks that underlie stress is more challenging. The Colorado Oil and Gas Conservation Commission is expected in early November to finalize new drilling rules that include a 2,000-foot setback from homes, the widest statewide rule in the country, but wells could still be built closer.

People I’ve interviewed have reported feeling a sense of empowerment by organizing with others to fight for more local control. But solutions aren’t only the responsibility of governments or the public; companies must be accountable, too.

This article was originally published on The Conversation by Stephanie Malin at the Colorado State University. Read the original article here.