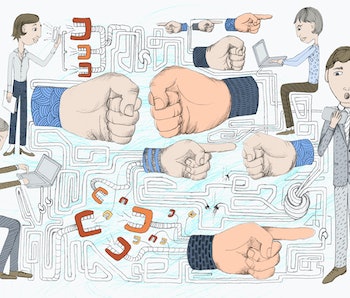 A looming deadline. A strained relationship. Financial woes. Stress often gets a bad rap, and maybe rightly so: Chronic stress can lead to depression, as well as physical ailments, including heart disease, premature aging, and increased mortality.

But as counterintuitive as it may seem, stress can actually prompt a few perks, according to a study released this week in the journal Stress & Health.

Researchers at Penn State University discovered that experiencing stress made people more likely to give, as well as receive, emotional support to and from another person.

The researchers took 1,622 subjects, both men and women, aged between 33 and 84-years-old, and interviewed them every night for eight nights. They asked them about their day, and whether they had felt stressed over the course of that day. They then asked whether that person had given or received some kind of emotional support that day.

The study revealed that that, on average, participants were more than twice as likely to either give or receive emotional support on days they experienced stress. This finding suggests that some stress might actually make people act in compassionate ways.

The science of stress

Stress is an inevitable part of life. The physiological mechanisms that cause us to feel stressed are as old as mankind itself. The fight-or-flight response that is activated in stressful situations is designed to be protective, not harmful, and evolved as a response to sudden danger. Small amounts of stress are beneficial — if not vital — to humans. It can push us to work harder and motivates us to succeed.

The good, healthy kind of stress has a name: it’s called eustress. Its definition literally means "good stress" — the “eu” prefix comes from the ancient Greek for "good" or “well”. Its evil twin, the bad kind of stress, is referred to as “distress”.

Stanford psychologist Kelly McGonigal has been pushing for years for society to rethink our relationship with stress urges for stress to be seen as something that can be positive. (Her campaign is going well — over 22 million people have watched her TED talk on the topic, ‘How to make stress your friend’.)

“The best way to manage stress isn’t to reduce or avoid it, but rather to rethink and even embrace it,” McGonigal writes in her book “The Upside of Stress”. Research backs up this sentiment: A 2011 study of 30,000 Americans linked high stress to a 43 percent increased risk of death. However, this increase was only found in those who already believed that stress is bad for their health.

Stress can even help us succeed when placed in high-stakes situations. A study in 2010 invited 60 students to take a practice Graduate Record Examination, a test used for admission to Ph.D. programs. Saliva was collected from all the students, and they were split into two groups: an experimental group, who were informed about the positives of stress, and a control group, who were told nothing. The researchers found that the members of the experimental group outperformed those in the control group; even more surprisingly, months later, when the students took the GRE for real, the students those who had been taught to see stress as positive still scored better.

These studies suggest that the key to a healthy relationship with stress is being able to identify the difference between good and bad kinds of it. Stress is an unavoidable part of life, but it is not wholly negative across the board — we could do well to welcome a little stress every now and then, especially if that means we’re prompted to give others a helping hand.

More like this
Mind and Body
Jan. 21, 2023
Procrastination study suggests a link to shoulder pain, bad sleep, and more
By Eva Skillgate, Alexander Rozental, Fred Johansson and The Conversation
Mind and Body
Jan. 23, 2023
Can spicy food boost our gut health? Here's what the science says
By Katie MacBride
Mind and Body
Jan. 16, 2023
One daily social practice could help stave off dementia
By Elana Spivack
LEARN SOMETHING NEW EVERY DAY.
Related Tags
Share: