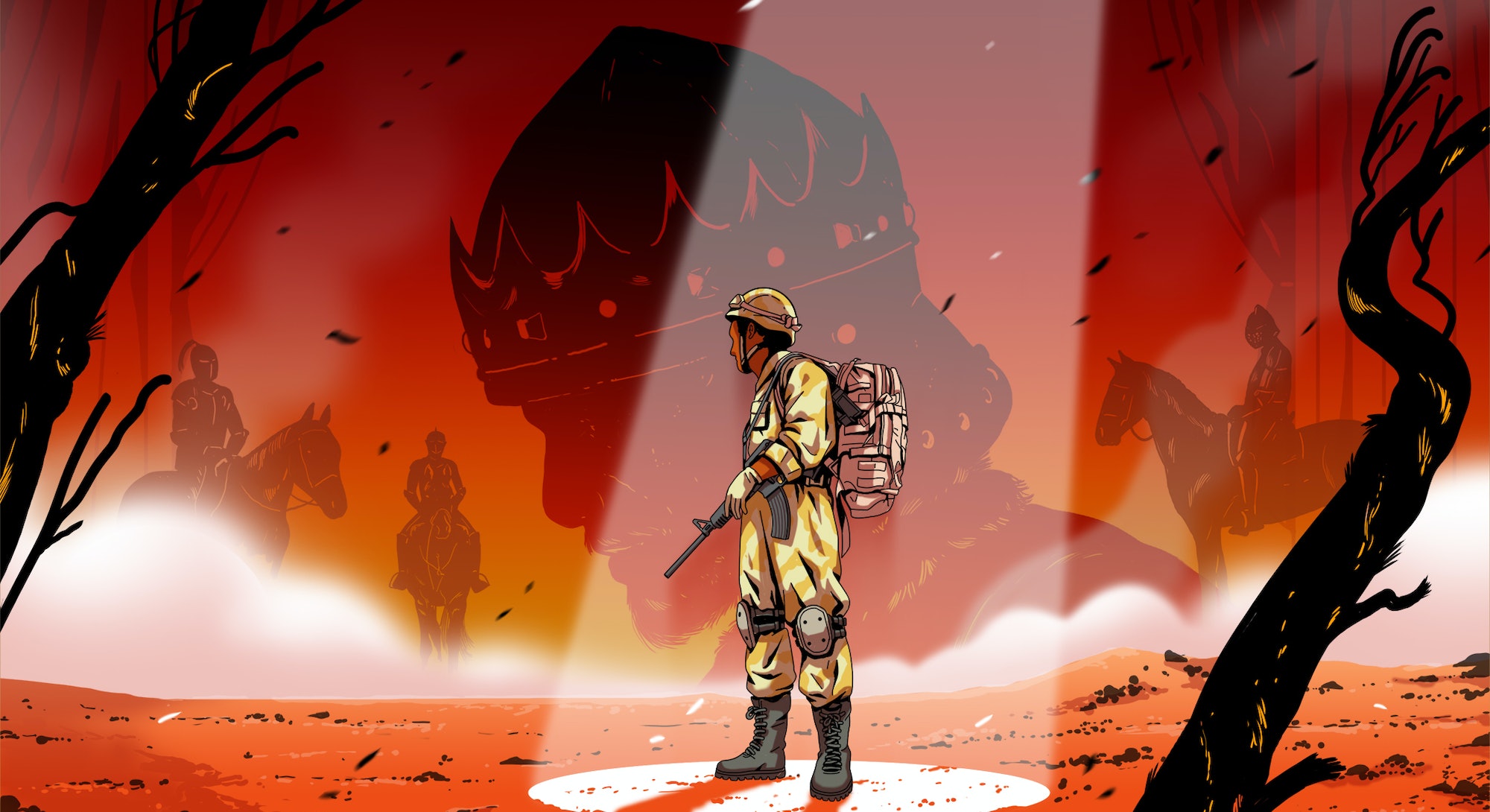 In Act 5, Scene 3 of William Shakespeare’s Richard III, the machiavellian hero King Richard is visited by a parade of ghosts.

These are the spirits of people King Richard has killed — and he has a guilty conscience.

Frank Lesnefsky can relate. He has also been haunted by ghosts. In September 2009, Lesnefsky returned to the U.S. from his second deployment to Iraq. He thought memories of the “complete obliteration of the human body” he witnessed on the battlefield wouldn’t stay with him forever. He was ready to leave the past behind.

But soon Lesnefsky started to feel a piercing pain in his lower back. “A ball of tension,” he tells Inverse. Then the nightmares began. To exhaust himself and ultimately sleep, Lesnefsky began exercising excessively — so much so that he ended up with kidney failure.

“I felt like my soul was inside a monocle race car,” Lesnefsky, 43, recalls. “I started drinking to try to calm.” In 2014, after several of his army buddies died from suicides and overdoses, he decided to pursue therapy.

Lesnefsky was diagnosed with post-traumatic stress disorder (PTSD) and, after experimenting with different therapists, he learned about DE-CRUIT, a program that combines theater and psychotherapy to treat trauma in veterans. DE-CRUIT completely transformed his life, Lesnefksy says.

It is healing, he says, to share his “hidden “voices” through Shakespeare and DE-CRUIT. Lesnefsky has come to learn he is “not the only one who struggles with trauma like this.”

Shakespeare as therapy has roots in art therapy, but DE-CRUIT incorporates new quantitative and psychosomatic data to support its use as a treatment for PTSD. Veterans like Lesnefsky are advocates for its use, while scientists see it as a noninvasive treatment capable of catalyzing change — a technique that heart measurements and brain scans suggest may help change the body and brain for the better.

“For hateful deeds committed by myself!”

DE-CRUIT is the brainchild of army veteran Stephan Wolfert, who left the military in the early 2000s to become a Shakespearean actor. Wolfert first dreamed of founding a training program to teach military veterans how to act after realizing “the grounding and breathing and focus needed to play Shakespeare” helped him manage his own suicidal thoughts.

In 2014 Wolfert approached psychologists from New York University in the hope that his experiential approach might intrigue their scientific acumen. It did. Since 2015, Wolfert and a team of New York University researchers have used Shakespeare’s work as the basis for a distinctive therapeutic treatment for PTSD in veterans.

At the 2020 Annual Conference of the American Group Psychotherapy Association conference, the NYU scientists presented quantitative data suggesting there is a biological basis to the therapy’s success.

A group of 24 veterans participated in a treatment program that involved attending a weekly meeting for eight to 10 consecutive weeks. Fifteen of the participants were male and nine were female, all between 26 and 68 years old.

The veterans were assessed for post-traumatic stress using the PTSD Checklist – Military Version (PCL-5), a standardized scale used to evaluate PTSD in veterans. They were also evaluated for depression using the Center for Epidemiological Studies Depression Scale (CES-D), a validated measure of depression applied in both clinical and general population samples, and for self-efficacy with the General Self-Efficacy Scale, a standardized measure of self-efficacy. Self-efficacy is defined as one’s confidence in their capacity to have control over one’s motivation, behavior, and environment.

The results suggest the 24 veterans experienced significantly decreased PTSD and depression, and increased confidence in themselves.

Ali’s DE-CRUIT research suggests early life trauma, such as sexual abuse or extreme bullying, can predate the trauma caused by military service. In many cases, veterans joined the army to escape a vicious loop of trauma, which started in early life and left them with a compromised ability to cope. The hypothesis is that each time DE-CRUIT participants recite Shakespeare, they are not just dealing with their time in the military; they are coping with traumas acquired through life.

“Having a way of tapping into your own body through your breath and speaking about your trauma opens you up to actually remembering the primary trauma,” Ali says.

“And heart with strings of steel.”

Shakespearean verses possess this “Elizabethan chain of being” veterans crave, Ali says. When Army veterans sit together and immerse themselves in monologues that match their personal trauma, they take on the shared mission of shedding their collective violent past and transforming it into a shared mission of healing. Many of Shakespeare’s characters are military veterans, which helps modern veterans warm up to this kind of therapy.

But there are also somatic reasons Shakespeare helps former soldiers battle PTSD. And these benefits aren’t confined to veterans.

“I feel embraced and safe amongst comrades.”

“In Shakespeare’s day, performers were almost entirely illiterate and therefore had to rely on the rhythm of the verse to help them to recall the lines of text,” Ali says. “Shakespeare’s meter of iambic pentameter mimics the human heartbeat, thus aiding in recall by pairing with the speaker’s natural pattern of breath.”

In his book, The Body Keeps the Score, trauma specialist and DE-CRUIT consultant Bessel van der Kolk gives a detailed account of how the iambic rhythm in Shakespeare’s verse relaxes the body.

According to van der Kolk and Ali, the verse rhythm pulsating in Shakespeare has a soothing effect on the body and mind. It’s like the breathwork approach used by trauma therapists.

“Lest I revenge. What, myself upon myself?”

Then fly. What, from myself? Great reason why:

Lest I revenge. What, myself upon myself?

Alack. I love myself. Wherefore? for any good

That I myself have done unto myself?

O, no! alas, I rather hate myself

For hateful deeds committed by myself!

Lesnefsky often contemplates: “Lest I revenge. What, myself upon myself?”

“I question if I should consider the multitude of negative voices in my head that condemn me for the terrors I’ve seen,” Lesnefsky says. “I question if I can be normal someday, without PTSD, physical and moral injuries, and the shame of my past invading my present.”

“Introductions include name, branch, service, and anything else participants feel like sharing briefly together, with a ‘right now I feel…’ check-in,” Lesnefsky says.

Often, there is a didactic portion, when Wolfert or one of the trainers explains how trauma affects the brain and the body. The trainers also note Shakespeare writes about the common experiences of veterans. And remind them how iambic pentameter and breathwork ground a person, stimulating their vagus nerve (the longest of the 12 cranial nerves, whose stimulation helps regulate strong emotions).

Members of the group then talk about their own service and trauma and read assigned Shakespearean lines that resonate with their experience. DE-CRUIT uses an algorithm to select Shakespeare passages that match the themes within the personal stories shared by the former soldiers. These themes include insomnia, moral injury, and betrayal.

The session ends with a “right now I feel...” checkout, as well as a “what I will take forward from this experience into my week” practice.

Eventually, these sessions slowly work up to a performance for family and friends. Performances often include participants performing a monologue they’ve written about their trauma, followed by the Shakespearean passage selected for them.

Lesnefsky can’t stress how cathartic it feels to be heard, seen, and validated by a community of peers. “I feel embraced and safe amongst comrades,” he says.

But might Shakespeare as therapy be helpful for other people, too?

Charles Figley, director of the Traumatology Institute at Tulane University, tells Inverse audiences of these veteran-studded interpretations might gain something new from the performances.

“When you are in the audience, you are seeing someone else carrying out the kinds of trauma you've sort of taken for granted, which is gratifying,” Figley says. “You feel you are not alone, and this increases the likelihood of you having empathy for the person who's suffering from these kinds of traumatic events.”

Drama as therapy is not new. It’s long been used to achieve catharsis in a variety of settings, from hospitals to schools. Drama has been used as a complementary therapy for various health hurdles ranging from depression to dementia, as well as to improve self-esteem, self-awareness, and emotional resilience.

But there is something unique about watching veterans play the role, Figley says. When veterans speak about trauma versus professional actors, it can make the experience for the audience even more intense and cathartic.

“Anyone who is in prison has some sort of trauma.”

This summer, Wolfert, the NYU team, and the Amphibian Stage, a theater company in Fort Worth, Texas, plan to offer a version of the DE-CRUIT program to military veterans in a local prison. Exactly when it will start is uncertain as all the staff and prisoners need to have been vaccinated and Covid-19 precautions lifted.

The first participants of this new arm of the program will be incarcerated veterans, but they intend to gradually turn DE-CRUIT into a trauma treatment program available to all inmates.

“Anyone who is in prison has some sort of trauma,” Ali says. She’s confident DE-CRUIT represents a new therapeutic model for treating PTSD. In the future, Ali predicts, Shakespeare-as-therapy can serve the population at large — not only veterans and prisoners but anyone who has experienced trauma.

While Figley has some doubts — he cautions “prison is a whole different world” from the battlefield and would like to see DE-CRUIT’s success be replicated in a broader study sample of college students — Ali remains confident.

“There is a misconception that if a veteran is experiencing PTSD, their trauma relates to the battlefield, but this is simply not true,” Ali says. Trauma is something anyone can carry.

In April 2021, DE-CRUIT received a grant from the National Endowment for the Humanities supporting its work. And while in-person theater remains paused, in May, De-CRUIT will perform virtually with the Elm Shakespeare Company.

Living now in Shelburne, Vermont, with his wife Maja and their 8-month-old daughter Kida Lea, Lesnefsky can’t help but draw parallels between his new, brighter life and the monologues he recites in his therapeutic sessions.

O limèd soul, that, struggling to be free,

Bow, stubborn knees, and heart with strings of steel

Be soft as sinews of the newborn babe.

All may be well,”

“Like Claudius, as I humbled my ‘stubborn knees’ to accept love and assistance while rusted in time and trauma,” Lesnefsky says, “my heart’s ‘strings of steel’ began to give way to healing.”