"I want to be an ambassador of hope." 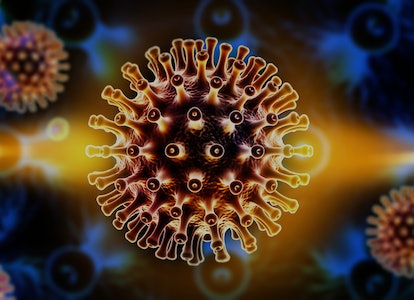 As COVID-19 tears across the world leaving a path of destruction in its wake, infectious disease seems to have the upper-hand on humankind at the moment.

But now for some very good news.

In March 2019, scientists announced that the second person ever had been cured of HIV. Now, the scientists detail this incredible achievement for the first time in a new case report published Tuesday in the journal The Lancet HIV.

The paper confirms that no active viral infection can be detected in the patient’s blood 30 months after ceasing antiretroviral therapy. They are, effectively, cured.

Until now, the patient’s identity was anonymous, referred to in the literature only as the “London patient.”

But on Monday of this week, The New York Times unveiled his identity for the first time: His name is Adam Castillejo.

Castillejo, now 40 years old, has been living with HIV since 2003. He took his last dose of antiretroviral drugs in October 2017.

“I want to be an ambassador of hope,” Castillejo told New York Times reporter Apoorva Mandavilli.

The news comes a full 12 years since the last time scientists announced the first-ever successful, long-term remission. Referred to as the “Berlin patient”, the first person to be cured of HIV was later revealed to be a man called Timothy Ray Brown. Since then, HIV researchers had been trying and failing to replicate the miracle.

In Castillejo’s case, he was diagnosed with Stage 4 Hodgkin’s lymphoma. In May 2016, he received a bone-marrow transplant from a donor with a genetic variation in a gene called CCR5. CCR5 codes for a protein found on the surface of cells that HIV uses an entryway in to the cell. There, the virus multiplies and takes over. Castillejo's donor had two copies of a mutation in CCR5 that caused their white blood cells to be effectively resistant to HIV — the transplant passed that same immunity on to Castillejo.

Indeed, the transplant which seemingly cured Castillejo of HIV isn't widely available as a treatment for any disease or condition. Stem-cell transplants of this kind are highly invasive and carry serious risks. It is highly unlikely that the treatment will become the norm anytime soon.

That is also partly to do with the drugs used to treat HIV. In the past, an HIV diagnosis was considered a death sentence; now, people with HIV can take medicine called antiretroviral therapy, or ART. This treatment lowers the viral load of HIV, keeps the immune system working, and prevents illness. People at risk for HIV can take pre-exposure prophylaxis (or PrEP): PreP is a medication that can reduce the risk of getting HIV from sex by 99 percent when taken daily.

The success of Castillejo's treatment is solid evidence that the Berlin Patient was not a fluke. And while the virus is no longer considered a certain death sentence, HIV/AIDS continues to carry an incredible stigma. For people without access to therapies like PrEP and ART, it still carries a severe threat. Scientists are still to discover a lasting and widely-available cure for HIV — but the case of the London Patient offers renewed hope for almost 38 million people across the globe are thought to live with HIV/AIDS.

Correction: This article previously described PreP as a medication that can suppress HIV. It is instead a preventative medication that helps high-risk individuals avoid infection, while ART helps people with HIV live long and healthy lives.

The London patient (participant 36 in the IciStem cohort) underwent allogeneic stem-cell transplantation with cells that did not express CCR5 (CCR5Δ32/Δ32); remission was reported at 18 months after analytical treatment interruption (ATI). Here, we present longer term data for this patient (up to 30 months after ATI), including sampling from diverse HIV-1 reservoir sites.

HIV-1 viral load in plasma remained undetectable in the London patient up to 30 months (last tested on March 4, 2020), using an assay with a detection limit of 1 copy per mL. The patient's CD4 count was 430 cells per μL (23·5% of total T cells) at 28 months. A very low-level positive signal for HIV-1 DNA was recorded in peripheral CD4 memory cells at 28 months. The viral load in semen was undetectable in both plasma (lower limit of detection [LLD] <12 copies per mL) and cells (LLD 10 copies per 106 cells) at 21 months. CSF was within normal parameters at 25 months, with HIV-1 RNA below the detection limit (LLD 1 copy per mL). HIV-1 DNA by ddPCR was negative in rectum, caecum, and sigmoid colon and terminal ileum tissue samples at 22 months. Lymph-node tissue from axilla was positive for the long-terminal repeat (33 copies per 106 cells) and env (26·1 copies per 106 cells), negative for ψ and integrase, and negative by the intact proviral DNA assay, at 27 months. HIV-1-specific CD4 and CD8 T-cell responses have remained absent at 27 months. Low-avidity Env antibodies have continued to decline. Mathematical modelling suggests that the probability of remission for life (cure) is 98% in the context of 80% donor chimerism in total HIV target cells and greater than 99% probability of remission for life with 90% donor chimerism.

The London patient has been in HIV-1 remission for 30 months with no detectable replication-competent virus in blood, CSF, intestinal tissue, or lymphoid tissue. Donor chimerism has been maintained at 99% in peripheral T cells. We propose that these findings represent HIV-1 cure.

More like this
Science
Jan. 22, 2023
Infection expert answers 7 top questions about Covid-19’s “Kraken” subvariant
By The Conversation and Sameer Elsayed
Mind and Body
Jan. 31, 2023
Is the Bivalent Covid-19 Booster Still Worth It? Here's What the Latest CDC Data Shows
By Katie MacBride
Mind and Body
Jan. 31, 2023
Why Is My Skin Worse in Winter? 5 Conditions Dermatologists Watch out For
By The Conversation, Jeffrey Chen and Sonal Choudhary
LEARN SOMETHING NEW EVERY DAY.
Related Tags
Share: