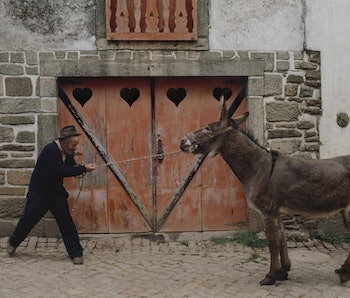 If you’re trying to change someone’s opinion, you better be in it for the long haul. According to research, humans are stubbornly set in their beliefs, even when learning new facts that challenge their assertions.

A study out of University of Iowa found “that once people reach a conclusion, they aren’t likely to change their minds, even when new information shows their initial belief is likely wrong and clinging to that belief costs real money,” according to a release summarizing its results.

Tom Gruca, professor of marketing at the Tippie College of Business, and other researchers had student study participants act as traders in the four-week box office receipts of 18 movies released between 1998 and 2008 using real money. The students had to explain their thinking and analysis behind their forecast prior to trading. Researchers found that even “as the key first weekend box office receipts were reported, prices stayed remarkably stable as traders ignored new value-relevant information and continued to rely on their initial estimates.”

Gruca also had students act as traders but without having them write down their analyses. In essence, they were less committed to them. These participants were more active in their trading when new information was introduced.

How do the opinions of others affect us? Two studies illuminate our inherent stubbornness while also showing feedback’s power in reinforcing beliefs.

The first study, published in Psychological Science, shows that people do change their beliefs when confronted with other people’s opinions, but the changes only last for three days.

The researchers reached this conclusion after having college students rate the attractiveness of women in 280 digital photos on an eight-point scale. After offering their rating, the participants saw the purported average of 200 other students’ ratings for that face. The group average typically fell one to three points above or below the participants while they matched only a quarter of the time.

The participants returned to the lab to rate the faces again after a day, three days, a week, or three months had passed. Researchers found that the group norm “seemed to sway participant’s own judgments when they re-rated the photos one and three days after the initial session,” but not after a week or three months.

The scientists said they believe the changes were more than superficial, and that “group norms seem to have had a genuine, albeit brief, impact on participants’ privately held opinions.” They’re not sure why the effect only lasts for three days.

“Our findings suggest that exposure to others’ opinions does indeed change our own private opinions — but it doesn’t change them forever,” said psychologist and study author Rongjun Yu of South China Normal University. “Just like working memory can hold about seven items and a drug can be effective for a certain amount of time, social influence seems to have a limited time window for effectiveness.”

Stuck in a feedback loop

In the other study looking at the effects of other people’s opinions, UC Berkeley researchers found that feedback played a bigger role than hard evidence when it came to boosting people’s sense of certainty when learning new things or trying to tell right from wrong.

“If you think you know a lot about something, even though you don’t, you’re less likely to be curious enough to explore the topic further, and will fail to learn how little you know,” said study lead author Louis Marti, a Ph.D. student in psychology at UC Berkeley.

More than 500 adult study participants were recruited through Amazon’s Mechanical Turk platform. Researchers tasked them with looking at different combinations of colored shapes on their computer screens to identify a “Daxxy,” an object made up by the researchers. The participants had nothing to go on to complete the task except for their own certainty of their answer.

“The final results showed that participants consistently based their certainty on whether they had correctly identified a Daxxy during the last four or five guesses instead of all the information they had gathered throughout,” according to a release summarizing the results.

“What we found interesting is that they could get the first 19 guesses in a row wrong, but if they got the last five right, they felt very confident,” Marti said. “It’s not that they weren’t paying attention; they were learning what a Daxxy was, but they weren’t using most of what they learned to inform their certainty.”

Research tends to suggest people are set in their beliefs, but one method may be more effective in swaying people’s views on an issue. University of Pennsylvania researchers, looking at the debate around genetically modified foods, found that a video of a former opponent to GMOs talking about why he changed his mind “had a greater impact on the attitudes of people who viewed it than a direct advocacy message,” according to a press release.

“The two-sided nature of the conversion message — presenting old beliefs and then refuting them — was more effective than a straightforward argument,” said Benjamin A. Lyons, a former postdoctoral fellow at the Annenberg Public Policy Center of the University of Pennsylvania.

The researchers cautioned however that not many Americans hold firm beliefs on GM foods, and they’re not sure whether a conversion message would be effective for other issues.

A conversion narrative recounts the process that led the speaker to reject one belief for a different, usually incompatible, alternative. However, researchers know little about whether, when, and, if so, how such messages affect audience attitudes about controversial science. Using a general US population-sample experiment, we assessed the attitudinal impact of three versions of a statement by Mark Lynas, an environmental activist who converted from opposing to championing genetically modified crops. Participants were exposed to (1) a one-sided pro-genetically modified message by Lynas, (2) a two-sided pro-genetically modified message in which Lynas indicates but does not detail his conversion, or (3) a two-sided pro-genetically modified message in which Lynas explains the process that prompted his conversion. We find that his conversion messages influenced attitudes by way of perceived argument strength, but not speaker credibility. This finding implies such messages induce greater elaboration, which may lead to durable attitudes that predict behavior.