“It’s the craziest feeling ever.” 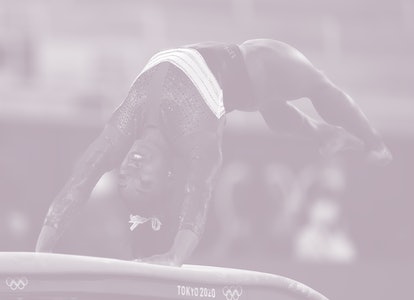 Last week, Simone Biles withdrew from the women’s team final and decided not to compete in a handful of other events, citing a need to focus on her mental health. On Monday, USA gymnastics announced Biles will be competing in the beam final on Tuesday — her last performance at the Tokyo Games.

On her Instagram story Friday morning, the record-breaking gymnast described what she has been going through in greater detail. She answered questions from followers about the phenomenon gymnasts experience called the “twisties,” a performance block that Biles described as “not having your mind and body in sync.”

Biles was experiencing the gymnast version of what some sports psychologists call “lost move syndrome.”

“You don't have to be an Olympian to have this happen to you,” Judy Van Raalte, a professor of sport psychology at Springfield College in Massachusetts and Wuhan Sports University in China, tells Inverse.

“I work with youth athletes, and I work with Masters athletes — young people and old people — across a wide variety of sports,” Van Raalte says. “And people have this experience. It's not just Simone Biles.”

Ahead of the final rounds of Olympic gymnastics — Tuesday is also the day for the men to shine — here’s the science behind this mental hurdle, why experts think it happens, and what’s being done to find a solution.

Twisties, the yips, and other blockers

Performance blockers can occur in nearly any sport.

The twisties, for instance, aren’t unique to gymnasts. Athletes in competitive trampoline, cheerleading, and diving can also get the twisties, as well as what’s called “flikikammo” (flick-ee-com-moh, from Finnish), a mental block related to backward-moving skills like backflips. Both of these fall under the umbrella of what psychologists call “lost move syndrome.”

Meanwhile, golfers and baseball players at all skill levels can suffer from “the yips,” a performance blocker that involves involuntary muscle spasms that mess up even simple putts and throws.

Dozens of other sports have a version of “the yips,” some by that name, some with their own (like “dartitis” in darts and “target panic” in archery). Musicians, too, can suffer from spasms in their playing hands, as can professionals in other disciplines that require fine motor skills like dentists, surgeons, and stenographers. Researchers refer to these disruptions as “focal dystonia.”

In each of these cases, a skilled performer who could once do an action automatically can no longer execute it at all. The result is what psychologists call a paradoxical performance: “We are able to perform, we intend to perform, we perform — but we do not succeed in what we intended,” wrote one research team in 2014.

A pro golfer who suddenly can’t make an easy putt is a shame, and a dentist who can’t fill a cavity may lose their job. But a gymnast losing herself during a high-flying move could be fatal.

Losing control — Researchers are working toward better defining the different flavors of these performance blockers, a key first step toward understanding how they work.

For instance, some suggest “choking” is a loss of focus under pressure that leads to below-normal performance, while “the yips” is something else, characterized by too much focus on the components of the action, which also messes you up. Others categorize choking as a version of “the yips:” calling focal dystonia (involuntary muscle spasms) “type I yips” and choking due to over-thinking “type II yips.”

No matter how you slice them, there’s limited research investigating the causes and cures for lost move syndrome and other performance blockers.

“We are not really good at fully understanding the relationship between the brain and the mind, or the brain and performance,” Van Raalte says. Most of the studies on the subject are qualitative, involving surveys of athletes asking them about their experiences.

Still, the patterns in their responses are telling. In golfers, one review found the yips seem to be exacerbated by anxiety, stress, pressure to perform, and perfectionism — and the easier the putt, the worse it can be.

Another study looked at athletes across sports, including diving, trampolining, gymnastics, cricket, golf, and darts, and found susceptibility to yips and lost move syndrome (the study treated them as separate concepts) also increased with an athlete’s proclivity to rumination — Why did that happen? What if I fail? — thinking about the fine details of an action that is otherwise autonomous, and the impact of the event (that is, how distressing would be to the athlete if they messed up).

Others have found links with obsessive thinking and intrusive negative thoughts, and suggest the yips and twisties get worse after a perceived mistake or setback — especially for perfectionists.

Are the yips curable? How do you fix twisties?

Biles shared on Instagram that she’s had the twisties before, and they usually last two or more weeks. “They’re not fun to deal with,” she says.

Other athletes haven’t been so lucky. If you can’t get past it, it can end your career.

“People could experience [flikikammo] for years,” Van Raalte says. “They would drop out, because either they get hurt, or it's incredibly frustrating — unless they can find ways to manage it.”

Van Raalte has worked closely with gymnast-turned-sport-psychologist Annamari Maaranen. Maaranen was Finland’s national all-around champion in 2005 and 2006 and would’ve competed in Beijing in 2008 if not for a knee injury.

As a gymnast, she had suffered from flikikammo (and introduced the English-speaking world to the Finnish word). She managed it by developing a new gymnastics move that felt forward-moving but was backward for judging purposes.

Maaranen and Van Raalte’s research has found that what makes it better is different for everyone. Often, changing something up can help — like Maaranen’s signature move.

What’s universally unhelpful is forcing an athlete to power through — especially older, more experienced athletes who are perfectly capable of pushing themselves.

Other research on treating the yips, mostly tested on male golfers, has tried medication, botox injections, acupuncture, and even eye movement desensitization and reprocessing (EMDR) therapy (developed to treat PTSD), all with limited results.

As for Biles, she says she’s “going back to basics.” It’s “something you have to take literally day by day, turn by turn.”

More like this
Mind and Body
Sep. 21, 2022
Is someone you care about going through a medical crisis? Here’s how to best support them
By Katie MacBride
Mind and Body
Sep. 18, 2022
Scientists know why we are so indecisive — and how to get over it
By Sarah Sloat
Mind and Body
Sep. 24, 2022
These two daily activities are wreaking havoc on teens’ sleep
By Horacio de la Iglesia and The Conversation
Related Tags
Share: