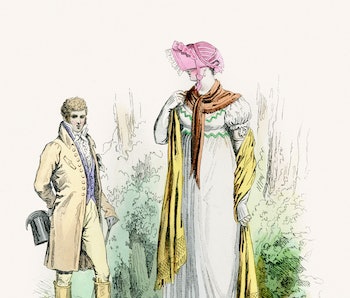 Mr. Darcy, Jane Austen's elusive dreamboat, had a notoriously tough time with the ladies. But the Mr. Darcy of the pheromone world — darcin — appears extremely effective in attracting mates. The sex pheromone, which scientists have named after Mr. Darcy, hijacks potential mates’ brains, changing behavior and triggering courtship... at least in mice.

In a new study published Wednesday in the journal Nature, scientists pinpointed how darcin travels through the body and causes these mind-altering effects. If the results are anything to go by, Mr. Darcy would be jealous of just how much “action” darcin seems to precipitate.

The Mr. Darcy pheromone, like other pheromones seen in animals, hasn’t been identified in humans. But if seen in humans, darcin would sure as hell help people navigate the sometimes maddening world of dating.

Despite their tiny brains and seemingly simple physiology, the sex lives of mice are surprisingly complicated. Just like humans, mice interpret behavioral cues and biological scents when navigating the mouse mating pool. And darcin, first identified by scientists in 2010, plays a pivotal role in this process.

When male mice pee, they release darcin, marking their territory, and signaling sexy time with potential mates. Female mice sniff what the male mice is putting down, helping her identify him, and decide whether to mate with him. But the female picks up and processes the scent very differently to how humans process smell, the new study shows.

Unlike humans, mice essentially have “two noses." One for processing normal scents and the other for pheromones like darcin, Ebru Demir, co-author of the study and researcher at Columbia University said in a statement.

“The first nose works like ours: processing scents such as the stinky odor particles found in urine,” Demir said. “But a second system, called the vomernasal nose, evolved specifically to perceive pheromones like darcin."

Demir and her team exposed 279 female mice to darcin-scented urine and analyzed their behavior. Nearly all of the female mice were immediately attracted to darcin, which originated from bedding previously soiled by male mice. Importantly, there weren't any live male mice suitors around.

After about 50 minutes of darcin exposure, some females began leaving their own urinary scent markings. The mice even started singing at ultrasonic frequencies, too high for the human ear to hear. Both of these behaviors indicate a spike in sexual drive, the researchers say. Lactating mouse moms showed a short-lived attraction to darcin, but didn’t stick around or exhibit the sex-related behaviors.

"Pheromones act as powerful scent messages to signal the presence of danger, food or prospective mates," Demir said. "With today's study, we've mapped the route that the pheromone darcin takes from the nose to the brain, bringing much-needed understanding to the mechanisms by which animals use scents to communicate.”

On top of observing external behavior, the researchers mapped how darcin affected the mice's brains. They zeroed in on the medial amygdala, a region associated with emotions like anger and fear. It seems that darcin switches on certain neurons — dubbed nNOS — in this region. When the researchers silenced the neurons, the sex-related behaviors disappeared and the females lost interest.

"Our results suggest that nNOS neurons in the medial amygdala do not simply pass along information about darcin," Demir said. "These neurons seem to be integrating sensory information about the pheromone with the internal state of the animal, such as whether she is a lactating mother and therefore not interested in mating."

Essentially, the Mr. Darcy pheromone helps females choose a sexual partner and figure out if he “just isn’t that into them.”

Next, Demir and her team are exploring how other pheromones influence mice’s sexual behavior.

"Pheromones have long been associated with an innate, immediate behavioral response, but here we have shown that darcin can elicit complex behaviors that are dependent on the internal state of the animal," said Demir. "As we continue our investigations, it's possible that other pheromones may also act on the brain in similarly unexpected and complex ways.”

Abstract: Organisms have evolved diverse behavioural strategies that enhance the likelihood of encountering and assessing mates. Many species use pheromones to communicate information about the location, sexual and social status of potential partners2. In mice, the major urinary protein darcin—which is present in the urine of males— provides a component of a scent mark that elicits approach by females and drives learning3,4. Here we show that darcin elicits a complex and variable behavioural repertoire that consists of attraction, ultrasonic vocalization and urinary scent marking, and also serves as a reinforcer in learning paradigms. We identify a genetically determined circuit—extending from the accessory olfactory bulb to the posterior medial amygdala—that is necessary for all behavioural responses to darcin. Moreover, optical activation of darcin-responsive neurons in the medial amygdala induces both the innate and the conditioned behaviours elicited by the pheromone. These neurons define a topographically segregated population that expresses neuronal nitric oxide synthase. We suggest that this darcin-activated neural circuit integrates pheromonal information with internal state to elicit both variable innate behaviours and reinforced behaviours that may promote mate encounters and mate selection.