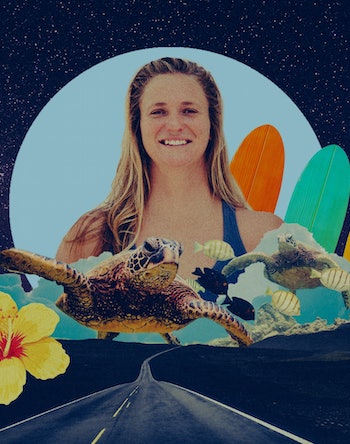 Surfing a 50-foot wave requires precise risk calculation: surfers must be able to hold their breath for up to five minutes if a wave holds them under. The rocks and reef beneath the water pose bone-cracking danger. Staying calm during a wipeout is near impossible, even with inflatable vests that keep surfers safer than ever. But riding high is worth it.

The world’s best big-wave surfers, like Paige Alms, a 31-year-old ocean athlete, two-time Big Wave World Champion, and Maui local, have been surfing these giant swells for years. But despite that, Alms and other female surfers were receiving a fraction of the prize money their male counterparts were earning. Alms helped lead the charge to change all that.

“I was always the friend that would defend situations or friends that were were getting bullied or something was wrong,” Alms tells Inverse. “I was always kind of the person that felt totally ok with speaking up for what was right.”

Alms and other female surfers are now being financially rewarded equally because of a contentious fight to close the wage gap. In 2018, surfing became the first international sport to institute equal pay for female and male athletes, a triumph implemented by the World Surf League (WSL) and pushed by the Committee for Equity in Women’s Surfing (CEWS), led by Alms and other leaders in the sport.

With equal pay and surfing’s forthcoming debut at the Tokyo Summer Olympics, female surfers are riding bigger and gnarlier waves than ever before. Alms is stoked on these strides but tells Inverse surfing still has a long way to go, especially around media and branding.

“The industry as a whole has a huge responsibility to step up. The WSL set a precedent now with the business end of their competition stuff, but the industry of sponsorship and marketing still needs to change,” Alms says.

"I was always kind of the person that felt totally ok with speaking up for what was right."

Alms has always been fearless, with a sunny disposition and desire to take on big challenges. Originally from Victoria, British Columbia, Alms moved to Maui at 9 with her mother and has been on the water ever since. After a beginner’s surf lesson and about a year of trial and error, Alms started surfing in local competitions.

"Are the little girls growing up now going to see the one article out of 100 that’s featuring a girl?"

At 13, she won the under-17 division of the US Surfing Federation National Championships in Oceanside, California. At 15, she paddled out to an outer reef near Maui and got her first taste of surfing big waves. She’s been surfing giant waves ever since. Alms is one of the best big wave surfers on the planet, winning the World Surf League’s women’s big-wave tour in both 2016 and 2017.

When Alms was growing up, she surfed with the greats, like Megan Abubo, Keala Kennelly, and Rochelle Ballard. She saw four-time world surfing champion, Lisa Andersen, on the cover of Surfer magazine and read women’s surf magazines, many of which have folded in the past few decades. Seeing these women shred helped Alms see herself in the sport, even from a young age. She worries that girls today won’t have that same experience, with Instagram, surf media, and sponsorship contracts often showing off model surfers or leaving out women altogether.

“The surf brands and magazines are strictly run by men and they’re only showing guys’ stories,” Alms says. “Are the little girls growing up now going to see the one article out of 100 that’s featuring a girl?”

In the past, surf sponsorships and marketing campaigns have been criticized for focusing on a surfer’s “look” — how many Instagram followers they have, how they look in a bikini, what exotic location they are traveling to — not on their performance.

Some female surfers feel pressure to wear bikinis in competition or do photoshoots on top of rigorous training and competition schedules just to make ends meet. Some surf brands like Billabong also sponsor far more male athletes than females and market them distinctly.

As Alms carved out a career on the professional surfing circuit, prize and sponsorship money wasn’t enough to support her training. She spent years juggling restaurant and construction jobs to fund gear and travel costs for surf competitions. Even though she was one of the best surfers of her age group, she was overlooked year after year by the big surf brands like Billabong and Roxy.

“When I was a teenager, I definitely noticed it because my image was totally different than the girls around me, the women that were really beautiful and kind of marketing themselves that way.”

At the time, Alms focused on training, improving her surfing, and having fun. “I’m really lucky because I was raised by my mom and her view on it was a lot different than I think most people’s. She was like, ‘You just go do your thing, you do whatever you want to.’ So I was all about surfing and having short hair, being one of the boys, and charging.”

Alms trusted that her career as a surfer would succeed despite the lack of support from the heavyweight surf brands.

‘It wasn’t like, ‘I need to be prettier to get a sponsor.’ It was like, ‘Well, f**k them. If they’re not going to sponsor me, someone else will,’” Alms explains. “And I’ve always seen two sides to the story. I’m not like, ‘Oh, the surf industry was horrible, but you know, there definitely wasn’t a lot of opportunity.”

Now, with a spot on Patagonia’s surf team and other smaller brand sponsorships, Alms can rely on surfing to financially support her. She uses technology and her Instagram account to share the reality of life as an athlete and the causes she cares about, especially ocean conservation.

“I might not get paid as much as Billabong or Roxy might pay me, but I know that I am riding for a brand that has way bigger values. Their core value of the company means that much more to me. And I know that it’s like a lifetime sponsorship. I’m going to ride for them as long as I possibly can, whereas Billabong is going to use you for a few years and spit you out and be like, ‘Okay, we’re onto the next,’” Alms says.

By advocating for more media and branding that shows the full experience of female athletes, Alms hopes to build a culture that rewards sport performance, not just sex appeal.

“If you’re sharing athlete’s stories, things change and people are like, ‘Wow, this girl’s story is so cool; her background and what she’s been through, recovering from injuries and the boundaries that she’s pushing in her sport.’ That’s when women are like, ‘I want to buy that product because that chick’s cool and her story is rad.’ And it’s not just about the look,” Alms tells Inverse.

Alms says “model surfers” aren’t necessarily a problem, but when the pressure to have a certain look gets in the way of performing athletically or showing people’s authentic selves, that’s an issue.

“I think the problem lies when insecurities are being covered up by posting things of your body behind a screen. It’s when these images that you’re putting out in the world that aren’t necessarily you,” Alms says.

“When you’re strong and confident and want to post something where you’re like, ‘God I feel really good,’ that’s great.”

"The surf industry itself is so small and so skewed and like a boys club. That’s what is going to need to change."

In the past few years, Alms has added activist to her role of star athlete, something she never expected. Along with surfers Keala Kennelly, Bianca Valenti, Andrea Moller, and policy experts Sabrina Brennan and Karen Tynan, Alms helps push surfing into the future through the Committee for Equity in Women’s Surfing (CEWS).

The CEWS worked with the World Surf League to institute equal pay, and after the long-fought announcement, Alms landed on the cover of the New York Times Magazine and California Sunday, and received coverage from Sports Illustrated, ESPN, CNN, NPR, and the BBC, to name a few. She became an international feminist icon, whether she intended to or not.

“I definitely never dreamt about doing that sort of thing,” Alms says. “But also, when I was a kid, I constantly spoke up.”

Alms speaks up, but she doesn’t push her singular perspective. Her strength in connecting to people who might not see eye to eye stems from her ability to see both sides, she says.

“The surf industry itself is so small and so skewed and like a boys club. That’s what is going to need to change if we want surfing to be viewed as a professional sport… And a lot of people don’t,” Alms explains.

More eyes than ever will be on surfing in the coming years, and the opportunities are exploding. Alms will compete on Canada’s surf team in next summer’s Olympics.

“I go back and forth because this is a pretty spiritual thing — being able to connect with Mother Nature and ride waves. But on the other hand, I’m like, ‘Wow, being in the Olympics, that’s amazing. That’s going to give such a huge opportunity to these surfers to do this and be set for life through opportunities like that. I’m always looking at two sides because it’s ever changing.”

Alms will share her real life as an ocean athlete and Olympic hopeful, and hopes surf brands and media will, too. She’ll also be featured in the upcoming documentary film, SHEChange, detailing Alms, Bianca Valenti, Keala Kennelly, and Andrea Moller’s fight for gender equity in surfing.

2020 could be surfing’s most exciting year to date, and it may set an even stronger example for other sports to follow.

Paige Alms is a member of the Inverse Future 50, a group of 50 people who will be forces of good in the 2020s.