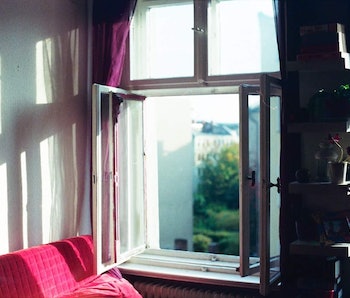 As many of us return to the office and congregate indoors over dinner and drinks during the holidays, we need to think about ventilation to minimize the indoor spread of Covid-19.

Aerosol particles are lighter than droplet-sized particles and can be suspended in the air for longer. The suspension and therefore transmission of aerosols is facilitated by poor ventilation.

Increasing ventilation indoors, with fresh outdoor air, is a key method of dispersing viral particles. Ventilation can reduce the risk that just one Covid-positive person (who might not yet know they’re infectious) will infect others.

There are some simple measures you can take, both at home and at work, to improve ventilation over the holiday period and beyond.

The best strategy at home and at work is simply to open windows and doors.

If you’re having friends and family over for a meal, or your office Christmas party, consider moving tables and chairs closer to open windows and open up a door to create a through the breeze.

Or, if weather permits, eat outside.

4. Set your air conditioner to pull fresh air from outside

Air conditioners can help, but they must be in the right setting.

At work or home, you don’t want to recirculate indoor air, as this just fans the same air around the room (but now colder or warmer).

Instead, always make sure your air conditioner is set to bring in 100% fresh air from outside. There are settings in offices that allow the system to increase air change per hour, meaning it can reduce the time it takes for all the air inside the room to be completely replaced with outside fresh air.

But the direction of the airflow is also important. For example, airflow from an air conditioner (that was recirculating air rather than pulling it from outside) was implicated in spreading the virus to a number of diners at tables downstream in a restaurant in China.

Offices welcoming back staff should prepare their air conditioners by having their engineers service the system to pull in fresh air faster than the pre-Covid setting (which may have been around 40 liters per second per person) at no less than 60 liters per second, per person.

In hospitals, aged-care facilities, and hotel quarantine, qualified engineers should be brought in to assess the adequacy of the air conditioner’s airflow. This is particularly crucial for any “hot zones” accommodating people who are COVID-positive.

The World Health Organisation recommends hot zones have 12 airflow changes per hour (that’s 80 liters per second per person), meaning the air is totally replaced 12 times every 60 minutes. This is the gold standard for ventilation and can be very hard to achieve in many buildings.

Guidelines released last week by the US Centers for Disease Control and Prevention recommend placing fans near open windows to enhance airflow. The recommendation is to keep fans on at all times when a room is occupied, for example at restaurants.

As with aircon, fans can be dangerous if they push the air directly from one person to another, and one is infectious. You should place the fan so it increases the flow of fresh air into the room, and shouldn’t be placed so the air moves from the room towards the open window or open door.

High-efficiency particulate air (HEPA) filters have been marketed as a way to reduce the concentration of SARS-CoV-2 particles in the air.

Their effectiveness is dependent on the airflow capacity of the unit, the configuration of the room, the number of people in the room, and the position of the filter in the room.

But there’s no evidence to suggest a portable HEPA filter unit will help in your home. So don’t rush out and buy one for Christmas.

They may be effective in some areas of health care, such as a Covid ward in a hospital or in aged care homes, particularly when used in negative-pressure rooms. The combination of the HEPA filter and negative air pressure reduces the risk of aerosol particles escaping into the corridor.

1. In public transport, taxis, and Ubers

Covid outbreaks have been traced back to exposure on public transport. For example, a young man in Hunan Province, China, traveled on two buses and infected multiple people who were sitting in different areas of the buses. A study of this cluster was carried out by Chinese researchers, who put forward one theory regarding airflow:

The closed windows with running ventilation on the buses could have created an ideal environment for aerosol transmission […] the ventilation inlets were aligned above the windows on both sides, and the exhaust fan was in the front, possibly creating an airflow carrying aerosols containing the viral particles from the rear to the middle and front of the vehicle.

The study’s authors recommend all windows be open on public transport to help disperse viral particles. If you’re on a tram or a bus, you should open them if you can.

However, in some forms of public transport, it might be impossible, like trains. In these instances, you should wear a mask.

Likewise, it’s ideal to have the windows down in Ubers and taxis. But if you can’t or don’t want to, turn on the air conditioner and have it pull fresh air from outside. And still, wear a mask!

This article was originally published on The Conversation by Mary-Louise McLaws at UNSW. Read the original article here.