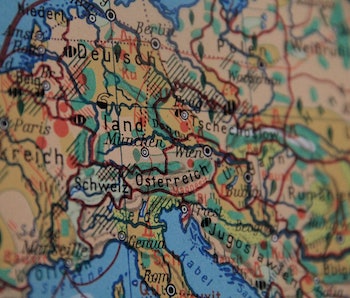 Researchers from Durham University in the UK have a new, slightly more ominous script for the the puberty talk. It goes something like, “somewhere around the age of eight, your body decides how it will allocate testosterone for the rest of your adult life.” And the way it makes that decision might be different depending on where you grew up, they write in a new paper in Nature Ecology and Evolution.

The study, published Monday, compared the testosterone levels of 359 men with different life backgrounds: 107 of them were born and raised in Bangledesh, 59 were born there but moved to the UK as children, 56 were second-generation Bangladeshi-U.K. immigrants (that is, their parents immigrated from Bangledesh but they were born in the U.K.,) and the last group were ethnic Europeans. The reason they included each of these four groups is because they wanted to show that ecological conditions — not genetic or ethic traits, which some studies have hinted at — correlate to testosterone levels. Their results showed that the men who grew up in the U.K. or moved there before the age of eight had higher testosterone levels regardless of ethnicity, suggesting that it’s nurture, not nature, behind these results.

Lead study author Kesson Magid, Ph.D., a biological anthropology professor, believes there’s a theory to support this. “A guiding idea for our project was Life History Theory,” he tells Inverse which conceives of the energy available over the lifetime of an organism as something like a budget.” He hypothesized that, in every man’s life, there’s a period when the body “decides” how much of this energy budget to invest in things like reproduction. “Once a male ‘commits’ a proportion of his investment to reproduction it determines his regular levels of testosterone for the rest of his adult life,” Magid says.

Some previous studies have shown that testosterone levels change throughout life, for instance, when a male becomes a father. But there’s still debate as to why and when these fluctuations happen. “What we didn’t know was whether these differences in testosterone were due to how men reacted to their immediate surroundings as adults or whether these differences were set at an early age, prior to adulthood,” Magid says. Of the 59 men who moved to the U.K. as children, those who arrived before the age of eight tended to have higher levels of testosterone than those who arrived during puberty. That observation, the study authors write, suggests that something happens around the age of eight that helps the body make that testosterone-budgeting decision.

Context plays a big role in how your body decides to make this crucial decsion. If you’ve spent the majority of your young life facing hunger and disease, your body may channel its limited energy resources elsewhere. Magid thinks that the biggest difference that sets child migrants apart is “exposure to poor water quality or tropical diseases that are not seen in London.”

Contextually, this study presents an important step forward when it comes to the science of interpreting hormones and particularly refuting the belief that some hormones are primarily controlled by racial or genetic factors. The TL;DR of this suggests that observed hormone differences between rich and poor countries aren’t biological, they’re socio-economic, something the field will have to consider going forward.

More like this
Mind and Body
Jan. 16, 2023
Research confirms a fact about the clitoris the Ancient Greeks understood
By The Conversation and Helen King
Mind and Body
Jan. 17, 2023
Scientists recommend 5 minutes of walking to combat your worst habit
By Miriam Fauzia
Science
Jan. 22, 2023
Infection expert answers 7 top questions about Covid-19’s “Kraken” subvariant
By The Conversation and Sameer Elsayed
LEARN SOMETHING NEW EVERY DAY.
Related Tags
Share: