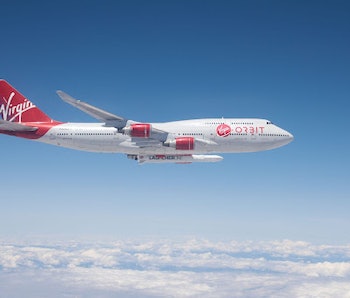 The gleaming white Boeing 747 is unassuming on the ground, steaming lazily until it’s ready for takeoff. It rolls off toward the the Pacific Ocean until it soars up into pale blue sky, just like any other plane would. Except this plane has the LauncherOne rocket onboard, which just dropped from under the left wing before blasting off into space.

Unconventional, sure, but the launch went according to Virgin Orbit’s plan, and company president and CEO Dan Hart is relieved. When Hart spoke with Inverse on July 7, it was one week after the company’s successful Tubular Bells: Part One mission.

This was Virgin Orbit’s third launch. Its first in May 2020 ended in failure, but its second in January 2021 successfully launched 10 experimental CubeSats for NASA.

“You're so focused. It is a very intense period when you're leading up to a launch,” Hart says. “There's tremendous camaraderie and teamwork.”

The team gathered at the Mojave Air and Space Port in California — the same spaceport that hosts Stratolaunch — ahead of the planned launch at 6:50 a.m. Pacific time. The mission involved three clients:

“The fact that you're flying other people's very precious spacecraft becomes very, very clear as they start to arrive at the launch site,” Hart says.

Want to know more about Virgin Orbit’s foray into spaceflight, the company’s relationship to Elon Musk, and its unorthodox rocket deployment method? Read the full interview with CEO Dan Hart, only in MUSK READS+.

There’s a lot riding on that plane

Virgin Orbit’s unique approach means the stakes are even higher. Unlike companies like SpaceX or Rocket Lab that launch rockets from pads, Virgin Orbit attaches its rockets to airplanes and releases them after takeoff.

As part of a plan to make satellite launches more accessible, it’s very logical. After all, airports are everywhere. But there are more significant reasons why Virgin Orbit is taking its unique approach — more on that later.

The Boeing 747 carrier, dubbed Cosmic Girl, flew to a Pacific Ocean site around 50 miles from the Channel Islands. After release at 7:47 a.m. Pacific time, the LauncherOne rocket ignited its engines and sent the seven satellites to an orbit at around 500 kilometers (310 miles) altitude.

“Seeing the system operate and fly out and then take our customers to orbit...there is nothing like it,” Hart says. “After all that, everybody has kind of a fair amount of tired eyes and incredible smiles.”

Hart praises the “precision” and “professionalism” of the team as they battled through a “high pressure, high-intensity experience.” The team’s fears gradually faded as it became apparent that the mission was going smoothly.

“You feel a confidence building as the altitude builds,” he says.

MUSK READS+ is a fully independent operation. We are not Elon Musk, nor are we employed by him. Our job is to report the events we find noteworthy, giving you the inside look at the worlds of space rockets, electric cars, clean energy, and more. It means first-hand accounts of a SpaceX rocket launch, Tesla insights from third-party analysts, and more.