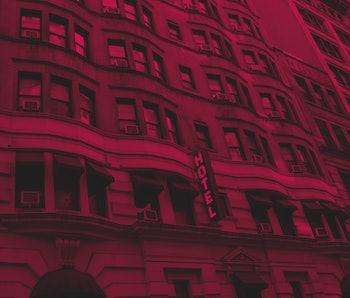 The Chief of the Army Corps of Engineers has gone viral in a video explaining one potential engineering response to the coronavirus pandemic.

Speaking at a rapid clip, Semonite was responding to a question about the outbreak in New York. He chose the moment to explain the government’s actions from a management perspective.

“This is an unbelievably complicated problem, and there’s no way we’re going to be able to do this with a complicated solution. We need something super simple. So our concept here is a standard design,” he said, speaking to an already-approved design that the Corps of Engineers is using in its “hotel-to-ICU” conversions.

“We want go through existing facilities primarily. Places out there, I’m mainly going talk and make it simple: hotels, college dormitories, and perhaps large spaces. So I’ll give you an example of a small room and a large room.

"What we need to do is, we need to go into these hotels that are empty. Where people don’t have jobs. We go in and cut a contract, to be able to have the state set up a lease for that particular facility. We would then take the building over in a period of an exceptionally short amount of days, and we would go in and turn this into an ICU-like facility.”

Given the unprecedented scope of the emergency, the government is not likely to find much resistance from private hotels or universities. Colleges have closed and gone online in unprecedented numbers. Industry executives have predicted that half of all United States hotels could close due to the coronavirus pandemic, meaning that those that receive government contracts might consider themselves lucky.

Semonite made clear that the Army Corps of Engineers could not perform the operation by itself. It needs efficient and sufficient buy-in from the states. That’s standard operating procedure for the Corps of Engineers, laws for other types of crises stipulate that the Army Corps can provide “assistance in the preparation of comprehensive plans” for each state. In order to find the facilities, he said, each “state has to nominate the facilities in a prioritized order.”

Of course, the coronavirus pandemic is different from other natural disasters like tornadoes or floods. In those cases, states might utilize Corps of Engineer plans themselves. But now, once a suitable location is found, the Corps “has to come in and be able to modify that facility.” The key difference between a standard hotel room and an ICU-ready room, Semonite says, “goes back to being able to change the pressure in certain hotel rooms and being able to have negative pressure in a hotel room.”

"We need something super simple."

From there, the Army Corps would then fill the ICU-ready room with the right sort of equipment: everything from disposable gloves to ventilators.

And after that, the states have to fulfill the fourth part of the plan: staffing. The Army Corps of Engineers are builders, not doctors. “The state has to put the people in there, you’ve got to clean it and train” people to operate within the facility.

Moving the conversation back to New York state as an example, Semonite said that when meeting with New York Governor Andrew Cuomo, “he said right up front: what can I do? And I said the biggest thing you need to do is start identifying facilities. And then he said how fast do you need them? And I said I need one tonight. I need three by tomorrow night. So we actually got turned on by the governor, we got money from FEMA, to go into buildings on Tuesday night. We did the Javits Center and some of the SUNY schools yesterday.”

It’s an impressive turnaround, but the efforts will likely need to be redoubled in the coming day. Semonite goes to note that his engineers are already looking through ten more facilities in New York alone. “Most of the governors are saying that their peak is somewhere around the middle of April,” he said, referring to when many think the coronavirus pandemic will reach new heights. “So this does not take all the time in the world to do it.”

At moments of crisis, it’s natural to look for strong competency from leaders. Lt. Gen. Semonite vibrates technocratic competency in this clip, presenting strong and swift action with detailed plans. It’s easy to see why the clip has caught on, but the Lt. Gen has more to worry about than going viral at the moment. Hospitals are already being pushed to capacity. It’s a race against time to convert enough rooms into ICUs in the meantime.

More like this
Innovation
6.24.2022 5:00 AM
Beam-steering radio technology could help autonomous cars finally hit the road
By Sascha Brodsky
Innovation
7.6.2022 9:00 AM
A single color is reason enough to buy a Jaguar XF
By Jordan Golson
Innovation
7.1.2022 10:00 AM
Robots are ready to get touchy-feely
By Sarah Wells
Related Tags
Share: