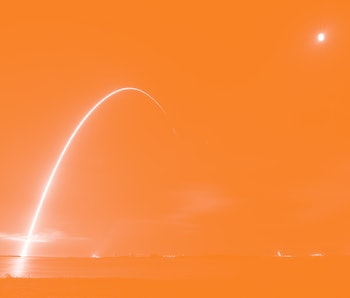 Falling behind on the latest Inspiration4 news? Our FLASH SALE is the perfect opportunity to catch up. We’re dropping our Musk Reads+ subscription price to $99 as a special Labor Day gift to you. Don’t hesitate — this offer expires at noon Eastern time on Wednesday, September 8.

Note that next week’s Musk Reads will arrive Tuesday, September 7, instead of Monday. And this is your last week to wear white, don’t squander it!

“Success is not guaranteed, but excitement is!” — Elon Musk tweeted today, August 30, while describing SpaceX’s Mechazilla as “robot chopsticks” that will catch the “largest-ever flying object.” Well, when you put it that way…

SpaceX: Avocados in space and more

Oh, if it weren’t for you meddling Bezos! Bezos no longer helms Amazon, but its subsidiary and proposed satellite plan, Project Kuiper, continues its founder’s legacy of messing with SpaceX. This time, it comes in the form of a protest letter to the Federal Communications Commission (FCC), urging the commission to decline SpaceX’s proposal for two different satellite configurations and instead push the company to only submit one.

Bezos notwithstanding, SpaceX is thriving. On August 29, SpaceX launched its first rocket since June, delivering astronaut snacks like ice cream and lemons to the International Space Station (ISS). The Cargo Dragon resupply launch also contained a few experiments, some of which were courtesy of the Los Angeles Girl Scouts. The payload is set to reach the ISS today.

On the SpaceX friends and lovers front, NASA has planned two more Mars missions for 2024. “Known as the Escape and Plasma Acceleration and Dynamics Explorers (ESCAPADE), the mission will consist of twin satellites, known as ‘Blue’ and ‘Gold’ after UC Berkeley’s colors,” a Universe Today article notes.

The primary goal of the mission will be to check on Mars’ weather, “watching for its atmosphere and how the planet is affected by the solar wind,” Universe Today said.

Tesla: Autopilot could be better

Things have been relatively slow for Tesla after the energetic A.I. Day, so Musk took to Twitter to engage in some good old-fashioned Autopilot discussion.

Here’s a breakdown of every detail Musk let slip:

As Musk and the rest of his Tesla crew work on improving Autopilot and Full-Self Driving software, the National Highway Traffic Safety Administration (NHTSA) continues its investigation into Tesla crashes involving a first responder scene. The government agency will have to add one more crash to their existing list of 11 — on August 28, a Model 3 crashed into a Florida Highway Patrol vehicle, and the car Highway Patrol stopped to assist. A crash of convenience, at least.

10. Blue Origin is selling a model version of its dick-like rocket for $69. It looks more like the Hitachi Magic Wand, IMO. Why is no one talking about this?

9. Speaking of dicks, Douglas Copeland used the word five times in his vigorous defense of Elon Musk for The Guardian. We get it, we get it!

8. The opposite of that Guardian essay, in every way — trans artist Cassils’ performance art $HT COIN. Donning the pseudonym “White Male Artist,” Cassils modeled their diet after famous white male artists like Andy Warhol and Banksy, preserved their poop in a can labeled after each artist, and sold the cans as NFTs. They recently broke anonymity to discuss the project and the legacy of white men. What’s your shit worth?

7. The Maine Mineral & Gem Museum will display a 32-pound rock shot from Mars onto Earth after an asteroid shattered its surface. That’s kind of like space poop if you think about it. Read more.

4. Tesla isn’t the only company with self-driving woes. Toyota has ceased operation of its self-driving pods after one crashed in the Tokyo Paralympic Games village. Read more.

3. Maybe a Tesla Bot could help them out? Read more.

1. And a piece of Musk history: In one of the most 2009 things ever, Elon Musk interviewed with the now inoperational YouTube channel The Valley Girl Show, an ongoing series where venture capitalist and former actress Jesse Draper interviews Silicon Valley heavy-hitters in an Elle Woods-ian fashion. Musk seems unprepared for how much pink is involved, but, like, he totally tries. “Mars is red,” he says.

This has been Musk Reads #262, the weekly rundown of essential reading about futurist and entrepreneur Elon Musk. I’m Ashley Bardhan, assistant to Musk Reads.

Musk Reads+ is a fully independent operation. We are not Elon Musk, nor are we employed by him. Our job is to report the events we find newsworthy, giving you an inside look at the worlds of space rockets, electric cars, clean energy, and more. It means firsthand accounts of a SpaceX rocket launch, Tesla insights from third-party analysts, and more.

More like this
Entertainment
8.5.2022 12:30 PM
For All Mankind Season 3’s space mogul is better than Elon Musk — here's why
By Ryan Britt
Science
7.31.2022 7:00 PM
A wild twist on a modern technology could unleash nuclear fusion
By Andy Tomaswick and Universe Today
Innovation
7 hours ago
60 years ago, an iconoclast designer revealed a fix for our biggest tech problem
By Tim Gorichanaz and The Conversation
Related Tags
Share: