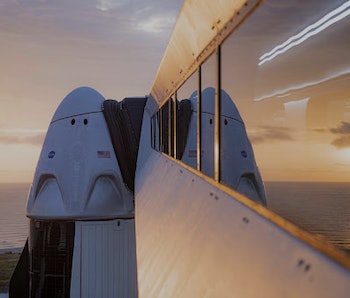 Since then, SpaceX has transported things like baby squid, satellites, and people with their Cargo and Crew Dragon capsules, which use Falcon 9 boosters to burst off into space. These capsules wouldn’t be possible without people like SpaceX senior advisor Garrett Reisman, who once helped develop Crew Dragon.

Now, Reisman’s groundbreaking project is about to power the first all-civilian mission to space — but that’s just the start.

A story for the space-ages

The former NASA astronaut flew on three space shuttles across two visits to the ISS, one in 2008 (where Reisman arrived and returned on different shuttles) and one in 2010. In 2011, when the shuttle program ended, SpaceX hired him and assigned him to the nascent Crew Dragon project.

The project was pivotal in replacing the shuttle. After the shuttle program ended, NASA rented seats on Soyuz rockets taking off from Kazakhstan to send its astronauts to the International Space Station — the agency had to pay around $80 million per seat and send its astronauts halfway around the world. The Crew Dragon, developed as part of NASA’s Commercial Crew program, would bring these flights back to the United States and bring costs closer to $55 million per seat.

“Back when I first started at SpaceX, I remember having lots of meetings with NASA as we talked about the Commercial Crew program about, hey, we can use these vehicles for other missions,” Reisman tells Inverse. “Not just for NASA astronauts, but private citizens.”

Reisman says that non-NASA missions like Inspiration4 were “part of the whole impetus” behind the Commercial Crew program. These missions would help “defray the costs,” but a lot of people “doubted whether it would actually happen.”

With next week’s launch, those doubts are history.

Want to know more about Crew Dragon’s inception, SpaceX’s surprising spacesuits, and why failure was “not an option” for the Elon Musk-led company? Read the full interview with Garrett Reisman, only in MUSK READS+.

Reisman says he “inherited Elon’s vision” with the Crew Dragon project. It’s part of the overall goal of making humans a multi-planetary species.

Musk has an ambitious goal to building a self-sustaining city on the planet by 2050. It’s a gargantuan task that will require thousands of Starship trips, transporting around one million tons at the cost of anywhere between $100 billion and $10 trillion.

Inspiration4 will fly just four people, but it could help pave the way to establishing a multi-planetary species.