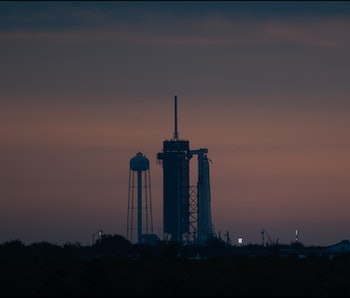 At first, they didn’t succeed. Elon Musk and NASA were denied making history this week by lousy weather, which prevented the launch of a Falcon 9 rocket carrying a manned Crew Dragon capsule. The heightened strength of electric fields in the atmosphere and preponderous cumulonimbus clouds forced astronauts Bob Behnken and Doug Hurley to take off their custom spacesuits and try again on Saturday, May 30.

With President Donald Trump, Elon Musk, and NASA Administrator Jim Bridenstine on hand, the canceled launch proved that no amount of star power can take precedent over the safety of the crew.

The Demo-2 mission launch will not mark only be the first time Americans have flown into space from American soil in nine years, but also the first time a private space company has taken anyone beyond Earth's gravitational pull.

"Standing down from launch today due to unfavorable weather in the flight path. Our next launch opportunity is Saturday, May 30 at 3:22 p.m. EDT, or 19:22 UTC," SpaceX announced over Twitter.

Having boosted the hashtag #LaunchAmerica throughout the day, NASA tweeted that "weather is the one thing that we actually cannot control on our missions so unfortunately, it did cause us to scrub today. The vehicles are healthy. @AstroBehnken and @Astro_Doug were ready to go and will be ready on our next launch attempt Saturday."

Both NASA and SpaceX will livestream Saturday's launch with hopes of a better day, although the current forecast is showing partly cloudy.

SpaceX rockets use a method of fuel loading known as “load-and-go,” where astronauts board a crew capsule and then, beneath them, the rocket is filled with what's known as RP-1 (Refined Petroleum-1) and liquid nitrogen. It's a system that SpaceX prefers because it allows for the use of dense supercooled propellant, but also leaves no margin for error once. With an instantaneous launch window of only a single second, even a ten-minute delay, as NASA weather officers estimated, would prove to be unsafe.

As rockets move through the clouds and into the upper atmosphere, they can act similar to a lightning rod. This effect was first noticed in 1970, after the (successful) launch of Apollo 12 through a lightning storm. "Electric fields with sufficient charge for triggered lightning can be expected to contain weather conditions such as the clouds associated with the cold front through which the Apollo 12 vehicle was launched. The possibility that the Apollo vehicle might trigger lightning had not been considered previously," a NASA report reads of that launch.

Although the risk was ultimately fine for Apollo 12, the report recommended "minimizing the possibility of creating a similar incident on future Apollo flights." What's true for those missions is proving true for SpaceX.