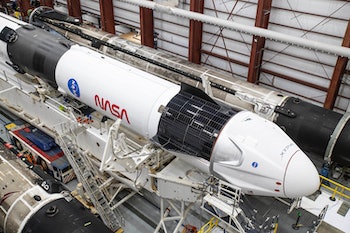 Crew Dragon, SpaceX's human-carrying capsule, is about to take on its biggest challenge yet.

On Monday, the company shared four images via Twitter of its capsule preparing for a crewed launch scheduled for Saturday. The "Crew-1" mission, scheduled for 7:49 p.m. Eastern time, will be the first non-test crewed flight of SpaceX's capsule and the first time that four people have flown in the capsule together.

Want to find out more about SpaceX's crewed launch efforts? Check out Musk Reads+ for exclusive interviews, analysis, and more.

Visible in the images is capsule C207, the first flight for this capsule. The Crew-1 team have named it "Resilience," similar to how May's first crewed capsule C206 was dubbed by the team as "Endeavour." This will be "Resilience"'s first flight. It's connected to a Falcon 9 rocket bearing the NASA 1970s "worm" logo, re-introduced for May's flight.

The images, which show the hangar at Launch Complex 39A, highlight how SpaceX and NASA have teamed up to deliver a new means of sending people into space. Its main purpose is to ferry astronauts to and from the International Space Station.

This was originally a task for the space shuttle, but after its final flight in 2011 the agency started renting seats on Soyuz rockets taking off from Kazakhstan. NASA's Commercial Crew program, which partnered with SpaceX and Boeing, was aimed at bringing these launches a little closer to home.

Although the Crew Dragon already completed a crewed flight in May – the first time SpaceX had ever sent a human into space – that mission only featured two astronauts, Bob Behnken and Doug Hurley. This one will feature twice as many to reach the maximum, a change that presents its own challenges.

The eight-hour flight to the station will mean taclking issues like eating and maybe going to the bathroom. Michael Hopkins, NASA astronaut and spaceflight commander on the Crew-1 mission, said in response to a question from Inverse Monday that "we’re going to be figuring out some of that as we go, because we’ll be the first crew on it with [...] a full crew."

The issues encountered on this trip could provide advice for future astronauts. Hopkins noted during the call, in response to an Associated Press question, that Behnken and Hurley had given them advice on how to pack their food. He explained that "we actually rearranged our food to make sure that it was easy to access."

The four are likely to offer similar help to upcoming missions. Shannon Walker, another NASA astronaut traveling on "Crew-1," said in the call that the team would "evaluate the choreography that it takes to do things in that capsule so we can inform future crews when they have four people." Walker and Hopkins will be joined by NASA astronaut Victor Glover and JAXA astronaut Soichi Noguchi.

They may need to pass on their advice relatively soon. A "Crew-2" mission is expected for spring 2021, featuring the first astronaut from the European Space Agency. Future missions also include one with movie star Tom Cruise, which could make history as the first feature-length film shot in space.

The Inverse analysis – The Crew Dragon's second crewed mission should set expectations for future missions. It will show how the capsule works with four people for several hours, a critical feature as NASA aims to use the capsule to its full potential.

While SpaceX is planning several future crewed missions, Boeing has struggled with its CST-100 Starliner. The firm launched an uncrewed mission with the capsule in December 2019, but a timer issue caused the mission to be aborted. Another attempt was scheduled for December, but a NASA safety panel suggested last month that the teams may need more time to get the capsule ready.

For now it seems, crewed flights will be all about SpaceX.

More like this
Innovation
Sep. 20, 2022
SpaceX Starship orbital flight: Elon Musk's giant rocket just passed another critical test
By Mike Brown and Molly Glick
Science
Sep. 23, 2022
Artemis I Moon launch may be delayed again — and NASA can't do anything about it
By Doris Elín Urrutia
Science
Sep. 23, 2022
NASA will smash a spacecraft into an asteroid Monday — what you need to know
By Georgina Torbet
Related Tags
Share: