A revolution in 3D printing could help scientists speak to spiders

“The way spiders build structures may teach us about how we could build better.” 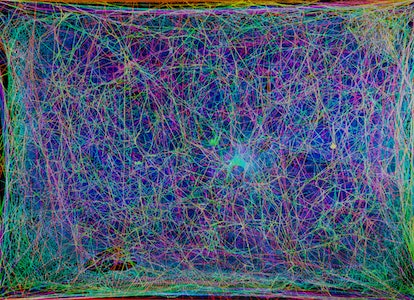 The music of great composers like Beethoven or Mozart has the ability to transcend and transform the human experience. The next great music composition may not come from the mind of humans at all, but instead, flow silently from the cobwebs underneath your bed.

Spiders have long been touted as master builders, but a team of scientists from MIT has now shown that these silk-weaving arachnids are accomplished musicians, too. Using lasers, interactive art, and virtual reality, the research team has made it easier than ever before to get inside the minds of these mini maestros.

“We are trying to learn how spiders build webs, how they communicate — through the use of vibrations,” Markus Buehler tells Inverse. Buehler is Jerry McAfee (1940) Professor in Engineering at MIT and part of the team behind the new research.

“We are training a machine-learning model to characterize and speak (synthetically) the language of spiders so we can influence what they do and build,” he says.

The research will be presented on Monday at the spring meeting of the American Chemical Society, held online April 5-30th.

What’s new — Scientists have long admired the weaving technique of spiders that create incredibly strong (relative to their weight) silken nets. The webs serve as both the spider’s home and as their hunting ground. Yet despite decades of studying this process, reverse engineering spider webs for human purposes — for example, 3D printing — has proven challenging. The team behind this study has been on the case for close to a decade.

In the new work, the team used lasers to precisely image in 3D both finished webs and those under construction. In doing so, they uncovered musical patterns hidden within the webs themselves. Essentially, each thread in a web behaves like a tiny guitar string and can be used by spiders to detect movement by listening to how the sound of the web changes.

Why it matters — Being able to listen in on the delicate music of spiders weaving their webs is a lovely, natural meditation. But it could also help scientists better understand how these poorly sighted arachnids use sound to influence the building of their webs and orient themselves. Such an understanding could be then be programmed into 3D printers that churn out delicate microelectronics to improve design and efficiency.

“As the spider web features some really intricate structures, we would like to better understand how the spider orients itself and how the feedback from signal/vibration processed through the spider’s brain forms a powerful reinforcement neural network,” Buehler says.

“We may be able to build synthetic neural networks for AI applications. These could find their way into future 3D printers with enhanced quality control or completely autonomous construction without the use of support material or scaffolding.”

The researchers also say that understanding these musical patterns opens up the door to communicating with these spiders directly, which could perhaps influence how their webs are built as well.

“We would like to understand to what extent we may be able to influence how the spider builds the web, and whether we can possibly direct the spiders to build certain types of webs,” Buehler says.

Here’s the background — Buehler is no stranger to spider science. He’s published a number of papers in the past decade studying the mechanical properties of spider silk and in 2015 designed a way to 3D print synthetic silk spider webs for analysis.

In this latest vein of research, Buehler and colleagues have already demonstrated the musical nature of spider webs as part of an international art and science collaboration called “Spider’s Canvas” where audience members could watch and listen as the movement of a 3D scanned and projected “spider’s web” changed the tone and rhythm of the music.

Vistors to “Spider’s Canvas” in Paris 2019 could experience the otherworldly music of spiders as it hummed from a 3D modeled web at the center of a stage. Now, the researchers are exploring what this music could mean.

What they did — To capture the music of these spider webs, the team first used lasers to capture 2D cross-sections of the web and then fed them into a computer algorithm that would recreate the real thing in digital, 3D space. To mimic the acoustic qualities of a real web, the team assigned different sound frequencies to strands of the web to create “notes” that could be plucked together to make melodies.

Similar to how each string on a guitar plays a solitary note but when plucked together they make the bridge to ‘Wonderwall.’

To get farther into the mindset of these musical spiders, the team created a virtual reality experience that allowed viewers to “enter” the spider web and observe it both visually and audibly.

"The virtual reality environment is really intriguing because your ears are going to pick up structural features that you might see but not immediately recognize," Buehler said in a statement. "By hearing it and seeing it at the same time, you can really start to understand the environment the spider lives in."

The researchers also scanned a web in real-time as it was being built by spiders and transformed each stage of the process into different musical notes, like a musical transcript. Buehler says that this can help engineers build more precise “spider mimicking” 3D printers in the future to build tiny electronic components like circuit boards.

What’s next — The research team is only just at the beginning of unraveling what sound can tell us about the construction and use of spider webs, but Buehler suggests it may go even beyond engineering to communication as well.

“A spider works without a scaffolding structure or support material. It’s an autonomous 3D printer that acts intelligently by sensing the environment,” Buehler says. “Using the web it is building as a giant sensor, and reacting to it and deciding on where to place new materials.”

By understanding the acoustic patterns that govern how spiders build their webs, the researchers write that it may be possible in the future to communicate with them using these frequencies as well — to essentially speak the language of the spider.

Whether such a possibility would lead to a battalion of spider soldiers or a city spun from webs is yet to be seen, but the researchers say it’s an exciting opportunity.

Abstract: Spiders are abundantly found in nature, making up more than 47,000 species. This ecological success is in part due to the exceptional mechanics of the spider web, with its strength, toughness, elasticity and robustness. To survive in different environments, spiders have adapted their web by providing housing, protection, and as a tool for catching prey. The spatial network and microscale size of silk fibres are significant challenges towards determining the topology of 3D webs, and only a limited number of previous studies have attempted to quantify their structure and properties. Here, we focus on developing an innovative experimental method to directly capture the complete digital 3D spider web architecture with micron scale resolution. We built an automatic segmentation and scanning platform to obtain high-resolution 2D images of cross-sections of the web illuminated by a sheet laser and developed image processing algorithms to reconstruct the digital 3-D fibrous network by analysing the 2-D images. This network provides a model that contains all of the structural and topological features of the porous regions of a 3-D web with high fidelity, and when combined with a mechanical model of silk materials, allows us to simulate and predict the mechanical response of a 3D web. To allow novel interpretations of the key features of the spider web, we translate complex 3-D data from the original web model into sound, using data sonification. Paired with a visual representation using VR, the resulting audio allows a unique immersion into the web that can describe features of the 3-D architecture as a function of spatial location in the web. The transformation of sound from grains to musical arrangements (melody, rhythm, harmony, chords, etc.) is analogous to the natural bottom-up design of proteins, resembling the design of sequence and higher-level hierarchical protein materials.