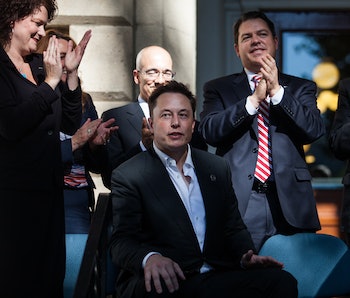 Last week, Musk Reads+ members heard from Valentina Contini, founder of the Innovation Lab at Porsche Engineering, about how flying cars could help us reach zero emissions. This week, members will hear about Moon Bikes.

Musk quote of the week: “The duty of a leader is to serve their people, not for the people to serve them” — Elon Musk tweeted on February 11, 2022, seemingly unprompted. I’m inclined to agree. Musk might keep this in mind when approaching a new lawsuit alleging racial discrimination at Tesla, which you can learn more about in this newsletter.

A lot is going on, allegedly. Some of it is small-fry, like Tesla’s Boombox “recall.” According to the National Highway Traffic Safety Administration, approximately 578,607 Tesla vehicles manufactured between 2020 and 2022 are being recalled for… making fart noises.

“The Boombox functionality allows a customer to play preset or custom sounds through the PWS external speaker when the vehicle is parked or in motion,” writes the NHTSA. Those preset sounds included goat bleats and farts. This is potentially distracting, so “Tesla will deploy an OTA firmware release to affected vehicles that will disable the Boombox functionality when the vehicle is in Drive, Neutral and Reverse modes.”

Moving on to much bigger things, California’s civil rights agency is suing Tesla over its reportedly-toxic workplace culture. According to the lawsuit, Tesla’s Fremont factory is allegedly a center of “rampant racism unchecked for years.” You can read the lawsuit in its entirety, but please be warned that it includes instances of racist language and imagery that readers might find upsetting. Musk has not yet publicly commented on the lawsuit, but racism in Tesla factories is something of an open secret. We’ll keep you updated with developments as they occur.

Elon Musk led SpaceX’s first Starship presentation in three years on Thursday, February 10, 2022. Though Starship is Earth-locked until the Federal Aviation Administration reaches a conclusion on its environmental assessment (that decision will be released February 28, 2022), Musk still gave the public a few — albeit vague — updates on the ambitious project.

Here’s an abridged version of the presentation:

1. Starship’s specifications are not finalized, but Musk would like the rocket to carry 200 tons of payload.

Starship’s specifications are in flux.

2. Musk wants to fly relatively soon — around the conclusion of the FAA environmental assessment if possible — but production times and government regulations make an exact date impossible to disclose

10. A new lawsuit against UC Davis and Neuralink filed by the Physicians Committee for Responsible Medicine calls out Neuralink for killing and maiming the animals it uses to test the tech. Teslarati has the full timeline of events.

9. Some better news: it turns out that Falcon 9 will not pummel the Moon after all. A Chinese rocket launched in 2014 will.

8. Billionaire Jared Isaacman (you might remember him from SpaceX’s Inspiration4 mission) has purchased three more SpaceX flights. Good for him.

7. Elon Musk will pay $11 billion in personal income tax. Tesla will pay $0 in federal taxes because “all of its pre-tax net income stemmed from overseas operations.” Capitalism is weird.

6. Anyway, would you want to attend the Super Bowl on Mars? A touchdown is extra-impressive with 63 percent less gravity.

5. In its Super Bowl ad, the Swedish car company Polestar says its electric vehicles involve “no empty promises” and “no conquering Mars.” I wonder who they’re referencing…

4. Sometimes I forget that you can just follow astronauts on Instagram. NASA astronaut Kayla Barron is posting from space.

3. What happens to the solar panels left to rot in landfills? German researchers want them to experience a better death. Reduce and reuse.

2. The Center for Space Science at New York University Abu Dhabi has put together an 88-slide “Atlas of Mars,” which uses “observations from the Emirates Mars Mission” to offer “readers a holistic view of the planet.” The team behind the project plans to update it as more information becomes available.

1. And a piece of Musk history: You may love Elon Musk, but his workplaces need to change. At the end of 2021, Tesla and SpaceX were caught in a wave of sexual harassment allegations. Read more on Inverse.

The ultra-fine print — This has been Musk Reads #285, the weekly rundown of essential reading about futurist and entrepreneur Elon Musk. I’m Ashley Bardhan, newsletter writer at Inverse.