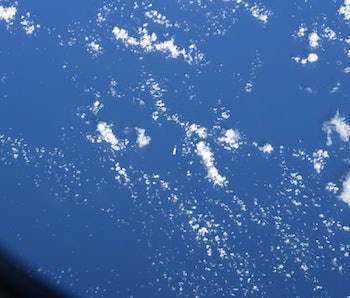 An astronaut in a SpaceX capsule captured a beautiful photo of the Earth from above — and managed to capture part of the capsule’s rocket at the same time.

Thomas Pesquet, the first European Space Agency astronaut to fly in a Crew Dragon capsule, shared an image Sunday from his adventure. The photo, taken during the 23-hour trip to the International Space Station that started early Friday, shows both the Earth and the second stage booster that helped propel the capsule toward the ISS.

“I took a very lucky shot: as I was getting out of my spacesuit and looking out the window, I happened to spot our 2nd stage of the SpaceX Falcon 9 rocket, flying in formation with us on a perfectly parallel track, but lower... two tiny objects 200 km above Earth! #MissionAlpha”

Want to find out more about where Crew Dragon goes next? Subscribe to MUSK READS+ for exclusive interviews and analysis about all things Musk.

The photo is unique as it shows the second stage floating peacefully over the Earth. The Falcon 9 rocket, which launched Pesquet and his team, is comprised of two stages:

Around nine minutes after the launch, before the upper stage and capsule separated, the first stage booster successfully landed on the Of Course I Still Love You drone ship in the Atlantic Ocean.

The mission marks Pesquet’s second six-month trip to the ISS, having flown on a previous mission in November 2016. France24 described Pesquet in 2019 as “France's most famous astronaut.”

Pesquet has nearly one million Twitter followers, more than any of the other crew members. He uses his large Twitter following to share some of the fascinating sights and highlights from his career:

The Crew-2 mission marked a number of firsts for SpaceX. It was the first time that SpaceX re-used either a first-stage booster or a capsule for a crewed flight. Re-using rockets is an important feature of SpaceX’s plans to reduce the costs of spaceflight.

It’s also the first time that two Crew Dragon capsules have been docked to the ISS at the same time. The Crew-1 capsule, which reached the space station in November 2020, is scheduled to depart with all four crew members on April 28.

Pesquet is not the first astronaut to capture an incredible SpaceX-related shot from space. NASA astronaut Chris Cassidy captured this photo from the ISS, shared by astronauts Bob Behnken in June 2020:

The Inverse analysis — The impressive photo is the latest shot captured by astronauts in the new space era. Equipped with access to social media sites like Twitter, it marks a dramatic shift from sixties-era expeditions where the footage was shared through traditional media channels.

SpaceX plans to further open up spaceflight to more civilians, most notably with the first all-civilian spaceflight. Inspiration4 is set to launch no earlier than the fourth quarter of 2021.

As a broader background of people experience space for the first time, it could lead to even more creative images beaming back to Earth.

More like this
Science
23 hours ago
45 years ago, the first Space Shuttle made history without going to space
By Allie Hutchison
Science
8.5.2022 12:15 PM
10 years ago, the Curiosity rover arrived on Mars — and revolutionized the hunt for alien life
By Allie Hutchison
Science
8.2.2022 12:15 PM
Look! NASA publishes new image of a fast-flying star ejected by a supernova
By Doris Elín Urrutia
Related Tags
Share: