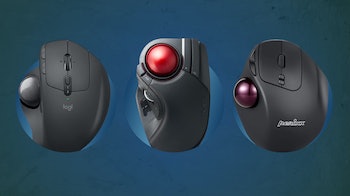 Whether you’re looking to reduce strain on your wrist or simply like the idea of whizzing through documents and websites with ease, choosing the best trackball mouse for you will depend on whether you’d like a center-mounted or offset trackball design, compatibility with your device, and any special features you’d like it to have. They come in a range of price points, and some even have customizable buttons, scrolling rings, and removable wrist pads for extra comfort.

What to consider when choosing a trackball mouse

Also, while trackball mice are known for preventing repetitive strain injuries such as carpal tunnel and tendinitis, you can help boost their benefits by finding mice with additional ergonomic features such as padded wrist rests and a tilted design. Finally, consider the type of work or games you’re into, as features like programmable buttons and advanced sensors may come in handy.

Ready to update the mouse you’re currently scrolling on? Below, the best trackball mouse for you, in wired and wireless models.

This Kensington mouse features a large center-mounted trackball and a patented scroll ring that lets you scan up and down pages with ease. It has four customizable buttons and variable scroll and cursor speed that can be adjusted with the KensingtonWorks software. In addition, the mouse connects to your computer via Bluetooth or USB receiver and uses two included AA batteries to operate. It also comes with a detachable ergonomic wrist support for extra comfort. Plus, there’s a wired version available in the listing for those who prefer it.

One reviewer wrote: “These are the best trackballs around. I've been using them for years, and wouldn't want to use anything else. The ball (pretty much a pool cue ball), is large, and has nice inertia, allowing you to scroll from one end of a large screen to another quickly. Its position allows for fine control with multiple fingers [...] The buttons (4) are well positioned and have good feedback. The scroll ring is a big improvement over scroll wheels. The wrist rest just rounds it up.”

For those who prefer a wired mouse, the Kensington Orbit Trackball mouse is a solid pick. It boasts optical tracking technology for precise movements, four DPI settings to choose from (1,600 maximum, according to the brand website), and a scroll ring that lets you navigate with ease. The detachable wrist rest allows you to customize your level of comfort, while the Kensington software offers button customization and cursor scrolling speed adjustments. A USB-C to USB-A adapter will be needed for newer Macs, however, there is a wireless version in the listing if you prefer.

One reviewer wrote: “8 hours per day of mouse movement caused me to develop a clicking in my thumb joint everytime I bent it. [...] I ordered this mouse in an attempt to relieve some of the stress on the thumb and after three weeks of use, my thumb is back to normal. Also, this mouse makes scrolling and swapping from screen to screen ten times faster than a regular mouse!! It's amazing!!! It is also very very good quality. The center roller ball is made of a very heavy high quality material as well. The rubberized wrist support is also an awesome addon and takes all the pressure off the wrist and hand. Great product.”

With a curved design, this budget-friendly trackball mouse is an ergonomic option for right-handers. It features seven buttons, five of which are programmable, a power-saving mode that sends the mouse to sleep after 10 seconds of inactivity, and two DPIs to choose from: 400 or 1,000. It conveniently connects to your device with the included USB receiver and uses two AAA batteries to operate (not included). Plus, there are also wired and Bluetooth versions available within the listing.

One reviewer wrote: “I am so happy I ordered this trackball. It is the perfect size, it works like a champ, and the price is right. The buttons feel good, the movement is smooth, and the app allows full configuration of the device (e.g., button assignments, movement characteristics, and click speeds.”

If you’re looking for the best trackball mouse for gaming, consider this highly rated, center-mounted trackball that’s packed with game-friendly features, including eight programmable buttons, a precision optical gaming sensor, and three DPI sensitivity settings: 500, 1,000, and 1,500. One reviewer wrote that “this is the best gaming trackball I’ve found so far,” and the attached palm rest might makes it one of the most comfortable, too. It comes with the two AA batteries needed for operation, and while the wireless design uses a USB receiver to connect to your computer, a wired version of this mouse is also available.

One reviewer wrote: “For gaming, this is great! It's definitely faster and more sensitive [...] Sometimes when making a large movement I find myself using my ring finger on the ball as well, but it seems to flow well... much better than hitting the edge of a mouse pad and having to lift a mouse and re position.”

This trackball mouse features an offset, thumb-controlled ball and a customizable rotating angle that can be adjusted between 0 and 20 degrees for the most comfortable tilt. Dual connectivity allows you to work on two computers simultaneously, and easy-to-reach back and forward buttons and a precision control wheel allow for effortless navigation. It connects to your device via USB receiver or Bluetooth (some reviewers recommend connecting via Bluetooth when using with Macs) and has an adjustable sensitivity ranging from 512 to 2,048 DPI. The battery is rechargeable, providing up to 70 days of use per charge. Plus, the companion software allows you to customize the mouse settings to your liking.

One reviewer wrote: “This trackball is smoother, better quality, and more reliable than anything else out there. The tilt is amazing and has really saved my wrist. This is my everyday mouse. I also use this for music production, and graphic design and it’s been amazing.”