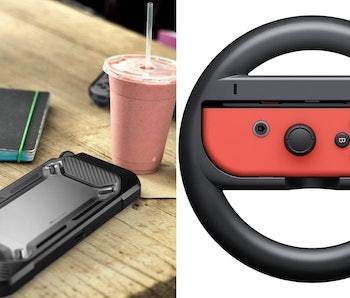 Nintendo Switch gives players the best of both worlds: a home console that’s also super portable. But to get the most out of your Nintendo Switch, you’ll want some of the best Nintendo Switch accessories. These picks mix the fun and the practical. Just about any kind of player can enjoy a shock-absorbent case that features special grips to make gaming for long hours more comfortable (and less slippery) as well as screen protectors to keep everything safe to game another day.

For Mario Kart fans, there are Joy-Con wheels that offer a similar feel to the classic Nintendo Wii racing wheel. And if you like to play games like Fortnite and want an option for wired audio, you can get a controller which plays much like the Pro Controller, but with a built-in audio jack connection and settings for voice chat for less than $30. For those who like to take their Switch with them, there are cool carrying cases to organize all your gaming gear and even car chargers for fast charging on the road.

Scroll on for a roundup of the best Nintendo Switch accessories for upgrading your console. All of these top-rated Nintendo Switch-compatible controllers, cases, stands, and other gear will make gaming even more fun for hours on end.

1. A Shock-Absorbent Case With A Super Comfortable Grip

For heavy-duty protection, the Mumba case for Nintendo Switch is a great choice. This grip case has shock-absorbent bumpers for drop protection and a textured grip so it comfortably stays in your hand while playing. It also features a scratch-resistant clear back panel. The case provides easy access to all of the Switch’s controls. However, you do have to take the case off to charge it (though reviewers say it's super easy to do). It’s available in four colors: black, green, red, and blue.

According to a fan: “This is the best accessory I've purchased for the Switch. Bar none. It makes it easier to hold. It's much more comfortable. The Switch is also better looking in the case.”

2. This Screen Protector That Is Scratch-Resistant & Touch Screen Sensitive

The amFilm tempered glass screen protector is an inexpensive accessory that will protect your Nintendo Switch screen without interfering with your gaming. This screen protector is 99.9% transparent while being durable and scratch-resistant. It’s 0.3-millimeters thick with a special coating to reduce the appearance of smudges and fingerprints. The glass is also touch screen sensitive so that it won’t slow down your accuracy. Each package includes two screen protectors, wet wipes, and a handy microfiber cleaning cloth. Reviewers also report that it's easy to put on.

According to a fan: “Bought a Nintendo Switch for the kids for Christmas. Took the store salesman's advice and bought this screen protector. Installed it Christmas Eve, nice and easy. Three months later, the 4 year old drops the Switch down the hardwood stairs. [...] The screen protector absorbed the hard impact of the corner of the hardwood stairs and protected the screen of the Switch from damage. This product truly delivers on it's promise to protect the screen!"

3. A MicroSD Card With Thousands Of 5-Star Reviews

With a 4.8-star rating after more than 9,000 reviews, the SanDisk 128GB MicroSDXC for Nintendo Switch is a top pick for adding additional storage to your console. “This is an absolutely amazing value for this amount of space!” raved one Amazon reviewer. There are three different size options available, offering from 64GB to 256GB of space to store your digital games like The Legend of Zelda or any other content and easily take it with you wherever you go. This memory card is also Nintendo-licensed and guaranteed to work on any Nintendo Switch system. The transfer rates are up to 100MBs for fast game loading, too. For its price, it’s also a great deal.

According to a fan: “It's a really nice micro SD card for Nintendo Switch. I wanted this to go with the main reason I bought the Switch ... The Legend of Zelda: BOTW. This should provide me with plenty of space for my gaming ... at least for a while. Price was pretty reasonable as well.”

For a retro feel, the 8Bitdo SN30 Pro Controller is worth considering. This wireless Bluetooth gamepad controller is designed to look like the classic Super NES controller but works on the Nintendo Switch with some serious 21st-century upgrades. There are joysticks which are clickable, plus rumble vibration and even motion controls. It features a D-pad, shot buttons, and a USB-C connector as well, and it lasts more than 10 hours on a single charge. It’s also compatible with Windows 7, macOS, Steam, Raspberry Pi, and other Bluetooth 4.0 and above devices.

What fans say: “The controller and buttons feel very comfortable, have good feedback, and don't have that "mushy" feel where you aren't sure if you pressed it or not that some controllers get -- especially the D-pad [...] The turbo button is very nice for some games where button mashing is needed.”

5. These Comfy Joy-Con Grips That Come With A Charging Stand

The PDP Nintendo Switch Pro Joy Con charging grip add comfortable expanded grips to your Joy-Con controllers and also includes a charging stand that lets you charge without having to remove the grips. The grip has an ergonomic design to make them more comfortable and easier to handle while gaming for long periods. It features trigger extenders for faster reaction time during gaming and analog stick caps for better accuracy.

According to a fan: “I wasn’t sure if it was another gimmicky accessory but the grip is actually very comfortable and the triggers feel more PS4-like. The dock works as expected and the Joy-Con stick covers are a nice addition.”

6. A Portable Car Charger That Charges Two Devices At Once

The YCCTEAM car charger for Nintendo Switch is a dual USB port charger that can power up two Nintendo Switch consoles at the same time. It automatically detects the amount of charging power necessary and is compatible with not only Nintendo Switch but any USB-C device. With a top-grade microchip and dual circuit protection system, it prevents overheating or short circuits. The connector is also reversible, so there’s no need to fumble when connecting; it’ll plug and instantly start charging from either side. It’s super compact and easy to store away in your glove compartment when not in use, too. Plus, it even includes a 6.6-foot-long cable so passengers can play while powering up.

According to a fan: “You want to take your switch on the road? Get one of these. You can play in the car. Well, don't play while driving. But the kids could play in the back while you were driving!”

7. A Sturdy Carrying Case That Can Store A Poké Ball Plus & Pro Controller

When you need plenty of storage space, the Zadii hard carrying case has gotten raves for its clever design and roomy interior. This large-capacity carrying case can be customized to fit two Pro Controllers and a Joy-Con or three Joy-Cons. There's also space for Joy-Con straps, the Switch console, a Poké Ball Plus, dock, AC adapter, and HDMI cables as well. It also has handy rubber slots for storing up to 12 game cards and 12 SD cards. This case offers two levels of protection for all of your gear with a hard shell outer case and foam inserts. It also comes with an adjustable shoulder strap for easy carrying and a non-slip handle.

According to a fan: “All the cutouts are well cut to fit the accessories snug without feeling too tight. The upper mesh pouch is larger than expected and can fit a fair amount of cords inside it. (I keep a small HDMI cord, a 3.5 mm audio cord, and a lengthy micro-USB cord for one of my wired controllers in it) The included microfiber cloth is a nice bonus as well.”

8. This Cheap Pro Controller Alternative With A Built-In Audio Jack

The PDP Nintendo Switch audio wired controller makes setting up voice chat on your console a lot easier. With its built-in 3.5-millimeter audio jack, you can plug in your favorite headset and instantly hear and communicate with your Fortnite squad (or any other game you play). Although this wired controller does not have motion control, it’s a great option when you want the feel of a traditional gamepad with a few extra features. It has programmable buttons that allow you to customize both your gameplay and your audio setting right from the controller so you can adjust the volume or mute your mic with a quick tap. Just like its name, it features switchable faceplates that are available in red, purple, black, and blue camo. It also includes a 10-foot-long USB cable.

According to a fan: “An amazing controller for a great price. Love the sound quality coming from my headset from this controller. And the back buttons incredible.”

The Nintendo Joy-Con wheel set is similar to the original Wii wheel remote controllers, and for racing and Mario Kart fans, this accessory is a must-have. Just snap your controller inside the wheel, and you’re ready to drive. The control buttons are easy to tap while steering and reviewers report that the trigger response also works well with it. It’s an upgrade from the Wii wheel’s annoying strings. However, it's on the small side for some adults with larger hands. You get two in a set.

According to a fan: “The controllers sit snug inside and do not slip out during gameplay. It’s easier to play racing games with the wheels since switch controllers are so small. It was a great buy for a great system.”