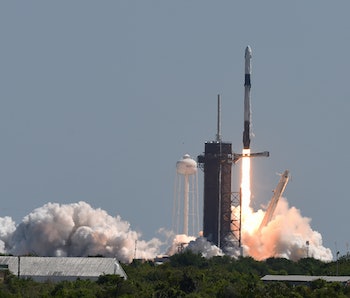 Thanks to intrepid astronauts and Star Wars, space’s deep yonder doesn't seem so scary, but rather, a promising frontier. When people talk about living on Mars or the Moon, they speak with the same wistful tone as a child might to try and convince their parents to book a trip to Disney World. The reality of space, however, much like the people underneath the Mickey Mouse costumes, is less glamorous. There are sharp rocks whizzing around. There are no rollercoasters (as far as we know), and there is very little to stand on. But private space start-up Axiom Space sees space’s potential. You can read all about its latest achievements in today’s newsletter.

HORIZONS is a series about the innovations of today that will shape the world of tomorrow. This is an adapted version of the April 18 edition of the HORIZONS newsletter. Forecast the future by signing up for free.

Axiom-1’s ten-day journey to the International Space Station is coming to an end. The private mission is the first of its kind to visit the International Space Station. Fundamentally, it involved four rich guys staying on the ISS doing science experiments. But it is the first step in Axiom Space’s ambitious plan to build its own private space station (cool). The four crew took off to space aboard a SpaceX Falcon 9 rocket on April 8, 2022, and after a successful flight and stay on the ISS, they’re turning back around.

According to NASA’s website, the crew will begin undocking from the space station on Tuesday, April 19, at 10:35 a.m. Eastern time. They will travel back down to Earth and land at approximately 7:19 a.m. Eastern time on Wednesday, April 20. It is still possible they could be delayed, however.

“If needed for any reason, there are additional opportunities for the crew’s departure from the space station on Tuesday, April 19 and Wednesday, April 20,” NASA writes.

NASA will provide live coverage of the team’s descent and their landing back on Earth. You can watch a farewell ceremony to celebrate both the Axiom-1 crew and the current NASA crew above the ISS, Expedition 67, from 7 a.m. Eastern time on Tuesday, April 19. At 8:30 a.m. they plan to close the hatch on the Axiom-1 crew, and finally, undocking will take place at 10:35 a.m. You can watch it all live from the comfort of Earth.

The Inverse Analysis — The fact that Axiom Space was able to pull off this mission suggests that private businesses are no longer the future of spaceflight, they are its present. Axiom Space has a lot of work to do before it opens a potential rival to the ISS.That requires a greater level of civil commitment to spaceflight, and a logistical feat in an industry mostly run on government money.

Still, this first flight shows that normal-ish people want to go to space, and can go to space — bringing private space and the government space agencies ever closer. They are also not just going up to orbit on a quick joyride, but to live and work.

A March study published in Environmental Research Letters details how land protection could correlate to social opportunity. The researchers, focusing on New England, found that low income and non-white-majority areas have notably less protected land compared to more affluent, white-majority communities. “Using a quartile-based approach within states, we find that communities in the lowest income quartile have just 52% as much nearby protected land as those in the most affluent quartile,” the authors wrote. “Similarly, communities with the highest proportions of people of color have just 47% as much protected land as those in the lowest quartile.”

The study authors created a screening tool to identify and prioritize underserved communities’ access to nature. Ideally, this preliminary research could help build cities that portion out green spaces for all, not just some neighborhoods.

See it to believe it…

Look at this photo of the Axiom-1 Crew Dragon Endeavour capsule on the ISS, appearing delicate and eggshell-like against the ebony blanket of space. If you squint, all the stray wires and tubes surrounding it start to look like little tentacles.

Our list of everything innovative and online you need to know about this week, handpicked and ranked with bionic precision.

5. People using crypto continue to get scammed and lose hundreds of thousands of dollars. Web3 is awesome.

3. Cities are getting greener. Skyscrapers and trees can be best friends if we let them.

2. SpaceX is developing a launch pad and tower for a potential East Coast Starship launch. Starship’s fate continues to be indeterminate.

1. Did you miss it? The Mars Simulation Project aims to “build computer models that characterize important aspects of establishing human settlements on Mars,” or in other words, The Oregon Trail for people who want to move to Mars. Do you have what it takes?

Beyond the horizon… A beautiful new book by publishing company Thames & Hudson called Art and Climate Change will explore, well, exactly that. The book will visualize humanity’s destructive mother-child relationship with Earth through curated art, and will be available to ship beginning on June 7.

This has been HORIZONS, a newsletter that looks at the innovations of today already shaping the world of tomorrow.

Do you think it can be improved? Have a story idea? Send your tips and all other musings to horizons@inverse.com

More like this
Innovation
Jan. 23, 2023
These 5 futuristic tech ideas could help us explore distant worlds
By Jennifer Walter
Science
Jan. 26, 2023
NASA just directed its Lucy mission to target a skyscraper-sized asteroid
By Doris Elín Urrutia
Science
Jan. 26, 2023
An asteroid will come within 2,200 miles of Earth tonight — here’s why you shouldn’t worry
By Jennifer Walter
LEARN SOMETHING NEW EVERY DAY.
Related Tags
Share: