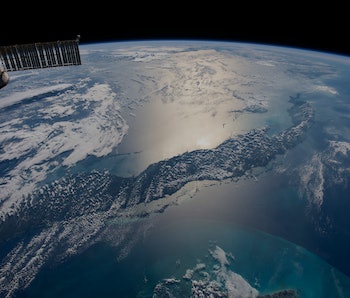 There are two sides to the burgeoning private space industry. One is filled with the blinding celebrity of Elon Musk, Jeff Bezos, and Richard Branson. This side of the space industry is filled with the CEOs of rocket companies. It captures headlines, makes bold proclamations about the future of humanity, and alternatively wows and enrages millions of Twitter followers.

The other side is far less flashy. Operating in the shadows of SpaceX and Blue Origin lies a growing support industry filled with people like Rob Andzik. He's president of Amergint Technologies, a company whose modems are the backbone of communications between Earth and the International Space Station, among others. Andzik only has eight Twitter followers, and Amergint only has 59, but it’s hard to imagine the space industry running without its softFEP Front Ends or satTRAC Modems, as two of their products are officially known.

Based out of Colorado Springs, Colorado, what the company lacks in star wattage, it makes up for in proximity to multiple Air Force bases. It's a promising location for a company focused on space. The Space Force, operating under the U.S. Air Force, will only increase America's presence outside the trappings of Earth's gravity. And beyond the military, there's NASA’s ambitious Artemis program, which aims to have humans back on the Moon by 2024, and make sure it lets the world know that this time is to stay.

Sustained human presence in space is a challenge on a number of levels, without much margin for error. One of the biggest challenges for a longterm human existence in space emerges in communication, which is where a quiet company like Amergint can help shape the future.

The LinkedIn page for Amergint will tell you that it’s an "employee-owned company delivering software-defined signal and protocol processing applications in the satellite ground, test, and data acquisition markets."

What does that mean?

Speaking with Inverse, Andzik says that “we do satellite ground communication systems. Basically, all of the signal and data processing that happens between the big antenna and the mission operations center. That includes network transfers and signal processing.”

Well, what does that mean? Amergint makes modems.

But these aren’t like the modems gathering dust in the corner of your parents' home office. “We get that a lot,” Andzik says. “There are a couple of things that come in to play. One, there’s sheer distance. To an LEO [low earth orbit] orbit, you’re talking 170-200 miles. To a GEO [geosynchronous orbit], you’re talking 22,000 miles.

There’s also an asymmetric nature to the communication. On the ground, we’ve got an enormous antenna and lots of power. We can juice that thing up. But on the satellite, they don’t have that type of power. Typically, the downlink [sending information from space to Earth] is a 5-watt downlink. And if you think about the lightbulb in your house that’s 60 watts. Same type of power. So the antenna on the ground, the receiver and the modem, needs to be able to pull that signal out of miniscule amounts of power by the time it gets to the Earth.”

To make his point, Andzik goes for a metaphor. “It’s kind of like watching a candle from 300 miles away and being able to count every flicker exactly right.”

Andzik tells Inverse that ”we support a lot of — more than 60 — national space programs. Our systems do all the uplink and downlink for the International Space Station."

"Every astronaut interview since 2013 has come down through our systems," he says.

For an industry that's rightfully obsessed with planning and procedure, a crucial component to dealing with the harshness of space is the ability to adapt. Amergint points to the modularity of its technology, the way that it can change to meet new and growing demands, as a big reason for its success. How does all of that modularity play out in real time? Well, for starters, it allowed astronauts on the International Space Station to watch the Super Bowl.

”Some of the biggest challenges,” Andzik says, “is bringing together all the different types of data. Numerous HD video feeds coming down. They’ve got voice feeds, they’ve got data feeds from all sorts of experiments on the station that comes down.

Amergint is preparing for one of the biggest potential growth points in the history of humans escaping Earth’s gravity: Space Force.

Officially, it “shall be organized, trained, and equipped to provide freedom of operation for the United States in, from, and to space; and prompt and sustained space operations,” according to the descriptions in the National Defense Authorization Act of 2020.

The Space Force represents a decades-long goal of the American military to achieve spaceflight independence from NASA, and could significantly increase the body count in space.

To that end, Amergint recently acquired another under-the-radar winner of government contracts: Tethers Unlimited, Inc., which also focuses on many of the details that go into space exploration. Tethers Unlimited’s website notes a specialization in “high-performance components for small satellites, robotic assembly and fabrication technologies, optical fiber winding and deployment, navigation sensors, satellite communications systems, and other advanced technology areas. “

On a practical level, that means all sorts of gizmos, ranging from lightweight space debris removal systems to cameras that can be suspended over lunar craters for study.

The company's deals keep coming. It recently acquired the space-based precision optics business of a much larger corporation, Raytheon, and signed a deal with Abaco Systems to develop a lab-tested electronic warfare communications capability. Built with the company's SOFTLINK architecture, it will be configured for war fighters.

But even beyond Space Force, "There’s a lot going on in the industry right now,” Andzik tells Inverse. Where people are putting their satellites is starting to change. For years, the standard orbit for a satellite has been known as geosychronus orbit, or GEO. As the satellite company Iridium explains it, “they appear fixed as they move at the same angular velocity as the Earth and orbit along a path parallel to Earth’s rotation, providing coverage to a specific area. From the ground, GEO satellites appear to be, well, stationary.” GEO satellites are great for covering specific areas, like weather satellites. They’re big, the size of a school bus, and typically with “billion-ish dollar contracts,” Andzik says.

But more and more satellites are aiming for what’s known as low Earth orbit, or LEO. LEO satellites are smaller (around the size of a refrigerator) and more likely to fly in a swarm, what’s known in the industry as a constellation. They’re also faster, more capable of moving around the globe. Because an LEO constellation is closer to the ground than a GEO satellite, there’s also less chance for lag. It’s where SpaceX is putting its Starlink satellites.

“They’re cheaper to launch,” Andzik says of LEO satellites. “They don’t last as long because they don’t need to, because they’re not as expensive. These mega-constellations that they’re putting up offer new communication opportunities — and as far as it comes to the ground, we get to participate in a lot of that. There’s are entirely new concepts for how to manage these. Instead of just talking to a small constellation, a handful of satellites, now you’re talking to thousands of satellites. You have to manage how they’re provisioned, how they’re launched, and even how they’re orbited. And all of that’s going on at the same time.”

“When I was entering the industry some time ago,” Andzik tells Inverse with a stifled laugh signifying the length of time, “it was that era of those GEO satellites — those big programs. Now it’s a much more interesting environment for those just getting out of college. They’re able to really have an impact.”

Amergint was founded in 2008, just as the Great Recession was beginning to hit. As Covid-19 rocks the world into a global state of economic uncertainty, Andzik says that Amergint has learned from its early days. “If you start during a drought, you’re already well-suited to manage during a drought, and to grow during a drought. We’re very forward-leaning right now.”

And leaning toward athe past, too. “You think about it, some of the satellites that are up there have been there for over 20 years. They were designed with concepts that were brand-new 30 years ago, and are simultaneously working with companies whose concepts won’t be ready for another decade. We have this really interesting capability in our technology that can span that, and evolve those existing programs and innovate new ones all at the same time.”