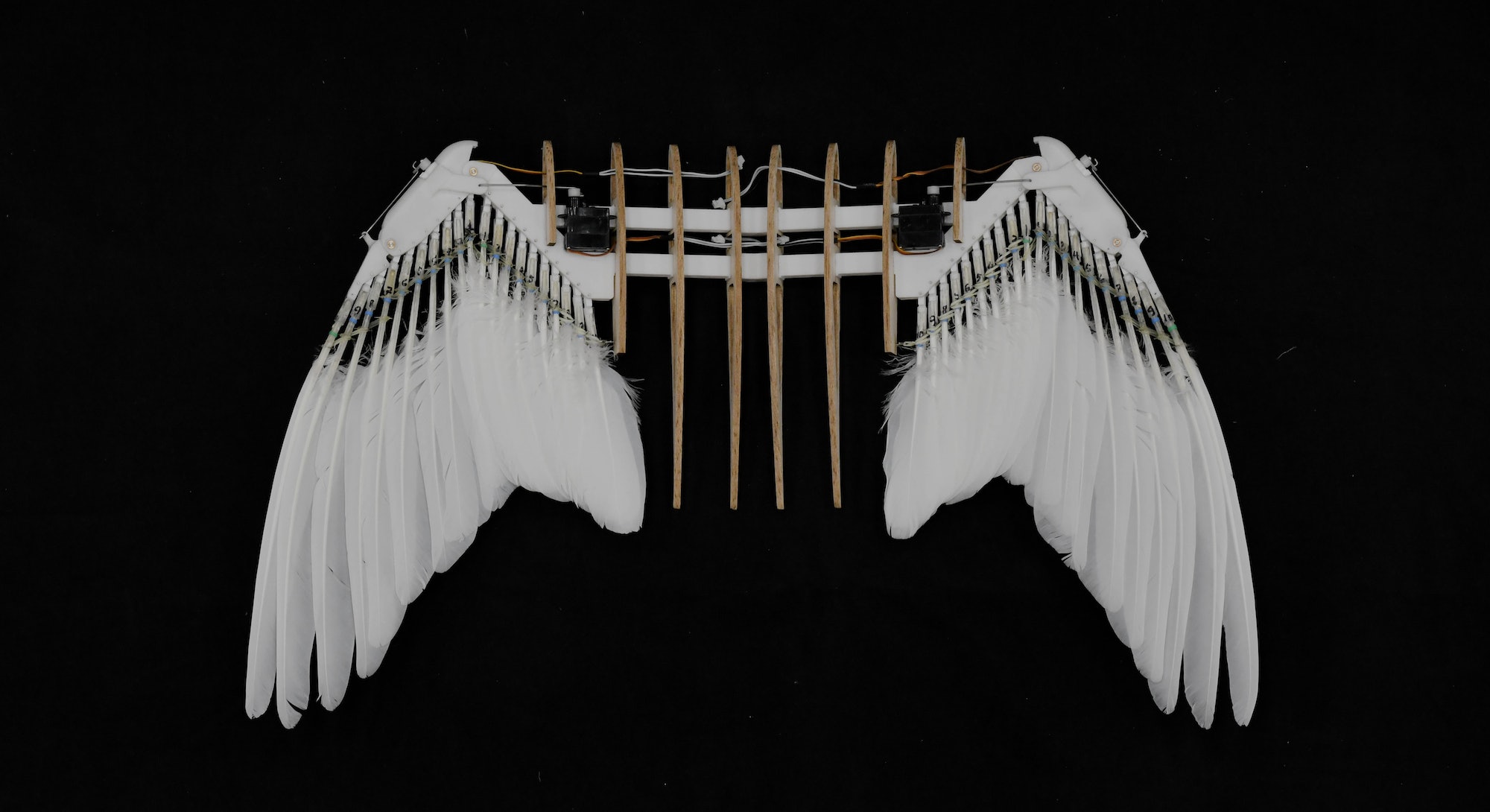 Humans may have mastered the art of air travel using huge metal tubes and jet fuel, but we’ve yet to create the elegant complexity that enables birds to soar through the sky. A replication of their biological engineering could lead the way to more adaptable, nimble aeronautics and foster a better understanding of the skeletal and muscular mechanisms of that make it all possible.

New research from Stanford University takes a forward step in understanding the biological mechanisms of bird flight. A study, published last week in the journal Science Robotics, looks at the kinematics of wing flexion and extension in common pigeons to determine how they are able to transform their wings into different shapes during flight.

They learned that parallel control of the wing’s 20 primary and 20 secondary feathers were made using subtle movement of the wrist and “finger.” To attempt to mimic that control, the team developed a biohybrid wing equipped with 40 real, elastically attached pigeon feathers.

A co-author on the study and assistant professor of mechanical engineering at Stanford University, David Lentink, said in a statement that this new understanding of the biological mechanisms underlying avian flight could be a breakthrough for future aeronautical designs.

“Since the Wright Brothers, aerospace engineers have tried to create wings that can change shape, morph, as well as birds can morph their wings. This has proven to be an incredibly hard design challenge with only small progress [to] date. We present a major step forward with the first biohybrid morphing wing under robotic control that can morph like a bird. Its design is inspired by our basic bird biomechanics research discoveries.”

To test their theory the team first put PigeonBot through wind tunnel trials before taking it out into the open air. From the wind tunnel trials, they were able to observe how wrist and finger movements changed the wing’s span, area and aspect ratio. And, once out in the open air, the team found that control of PigeonBot’s finger and wrists were enough to make stable turning maneuvers, demonstrating for the first time that real pigeons may primarily use their fingers to fly as well.

The team also observed that throughout these trials PigeonBot’s wings were remarkably stable and robust, particularly under turbulent winds.

“Testing our biohybrid robotic morphing wing in my wind tunnel, we found mimicking these structural features of birds makes the morphing wing particularly robust to high turbulence,” said Lentink. “This has numerous applications in making morphing wings safer to fly in a highly turbulent atmosphere. The wing itself has the highest number of morphing wing elements demonstrated in flight [to] date, and it is unusually soft and robust, thanks to recycling pigeon flight feathers.”

Mimicking these characteristics could lead to more adaptable flight technology down the road.

But, as for their current research, Lentink said they’re working on cracking lingering flight engineering questions and expanding their understanding of wing morphology beyond common pigeons.

“I want to start studying a much larger sample of all ~10,000 described species of birds,” said Lentink. “I am also working on a new biohybrid aerial robot with both a morphing wing and a morphing tail that performs like a bird tail does. This is to increase the maneuverability of aerial robots and aircraft and get rid of the vertical tail, something birds solved more than a hundred million years ago. But this is still an engineering challenge.

Since the Wright Flyer, engineers have strived to develop flying machines with morphing wings that can control flight as deftly as birds. Birds morph their wing planform parameters simultaneously—including sweep, span, and area—in a way that has proven to be particularly challenging to embody robotically. Previous solutions have primarily centered around the classical aerospace paradigm of controlling every degree of freedom to ensure predictable performance, but underperform compared with birds. To understand how birds accomplish wing morphing, we measured the kinematics of wing flexion and extension in common pigeons, Columba livia. The skeletal and feather kinematics show that the 20 primary and 20 secondary feathers are coordinated via approximately linear transfer functions controlled by wrist and finger motion. To replicate this control principle in a robot, we developed a biohybrid morphing wing with real feathers to understand the underlying design principles. The outcome, PigeonBot, embodies 42 degrees of freedom that control the position of 40 elastically connected feathers via four servo-actuated wrist and finger joints. Our flight tests demonstrate that the soft feathered wings morph rapidly and robustly under aerodynamic loading. They not only enable wing morphing but also make robot interactions safer, the wing more robust to crashing, and the wing reparable via “preening.” In flight tests, we found that both asymmetric wrist and finger motion can initiate turn maneuvers—evidence that birds may use their fingers to steer in flight.