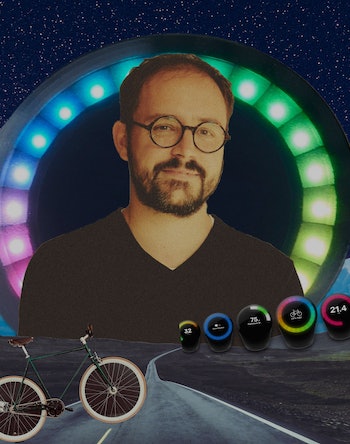 Xavier Peich describes himself as a “shit disturber,” but in-person, he’s self-effacing, passionate, and polite.

The bespectacled Montrealer with a master’s in political science appears to be the most effective type of shit disturber: The one who just gets to work on the disturbing. That attitude has manifested itself in something that could change urban transportation, as he’s built a bicycle computer that’s smart while accessible, and easy to use for any cyclist, a label that Peich thinks should apply to anybody who’s able to pedal.

SmartHalo, the name of the bike computer that looks like a hockey puck and features a rainbow-colored halo, emerged as an idea back in 2014. Peich and his eventual co-founders were at a bar in one of America’s oldest — best? — drinking cities, Philadelphia.

“We said, ‘OK, we’re not going out of this space until we have a good idea, so let’s drink and find one,” Peich, 33, tells Inverse.

The group of friends walked out with the idea for a handlebar-mounted computer and app that should satisfy data-obsessed roadies and the occasional bike commuter. The SmartHalo 2 debuted in May on Kickstarter (it’s due to ship in December), and will be the people’s bike computer, or, at least, it should be. From the prototype Peich showed me recently, it’s a continuation of the first generation’s innovation, and a welcome departure from some of the initial model’s negatives.

But Peich has bigger plans than building a bike computer empire, as you might expect from a shit disturber. He sees SmartHalo as a device to inspire more people to get on bikes in cities across the world. It can reduce carbon emissions by keeping a tally CO2 saved each ride and showing that data to users. It can reduce traffic congestion by motivating people to ride. And it will most certainly make its users healthier in the decade to come.

Also read: Bicycling in 2025 Will Be Different in Two Big Ways

The vision for SmartHalo wasn’t completely inspired over drinks, of course. Before that trip to Philly, Peich broke his phone after dropping it while riding his bike and trying to look at directions at the same time. A week later, disaster struck again when his bike was stolen. Only if there was a device that offered on-bike navigation that doubled as an alarm, he might’ve thought.

The first SmartHalo computer raised money with a 2015 Kickstarter campaign, selling 3,000 units before becoming the first product from the site to ascend to crowdfunding heaven. The coveted shelves of Apple stores in the US, Canada, and Europe. To date, it’s sold about 25,000 devices.

In May, the next generation debuted: The SmartHalo 2 launched on Kickstarter, and Peich hopes to eventually sell 50,000 units. It’s not yet public if SmartHalo 2 will also be for sale in Apple stores. As of this writing, it has raised more than $890,000, with 7,200 backers and 18 days left in the campaign.

“The campaign has been going great,” Peich told me recently. “We’re already at double what we did last time, and there is still three weeks to go.”

Like the first model, the SmartHalo 2 has five features: Navigation (using Google Maps), a headlight, an alarm, a fitness tracker, and an assistant.

“A lot of people go buy it for the navigation, but the alarm is by far the favorite feature of users,” Peich notes, citing internal data the company keeps on what features are most used. “It’s used everywhere by most users.”

Unlike the first-gen SmartHalo, it also has an OLED display (branded “PeekDisplay”) that can show speed, distance to destination, and give directions to cyclists. It also has a “compass mode” that allows riders to take more creative routes, and the light turns on as it gets dark. There’s also a weather alert feature, and it can connect to Phillips Hue, Ring, Nest, and other smart home appliances with an If This Then That integration. Finally, the SmartHalo 2 also features a finger pad for finger gestures while on the bike.

Aesthetically, the SmartHalo 2 is smaller and lighter, and looks less bulky when mounted on one’s bike compared to the first-gen model. And the headlight is also brighter — “best in class,” Peich says. The lock is also a little easier to adjust if you decide to take the SmartHalo 2 off your bike.

A Mission for a Less-Polluted Future

One of SmartHalo’s best differentiators, in addition to that bike alarm, returns with the new generation. It’s a tracker that measures kilograms of carbon dioxide saved per ride. (I found it to be the data point I checked the most in the app.)

“Bikes are the solution to so many things in urban life,” Peich said in our interview, over the sound of drivers honking at each other from the street some three floors below. “Half of the world’s population now lives in cities, and 25 percent of all CO2 is from transport. If we can fix urban transportation, we have a shot. It’s not enough, but it helps.”

"If we can fix urban transportation, we have a shot."

The SmartHalo app has logged a total of 446,949 pounds of CO2 saved by all every cyclist who uses the app, Peich says. To put that figure into context, that is the equivalent of removing the exhaust from 18 2018 Toyota RAV 4 models (the top-selling SUV last year in the US) from the road, if you factor in the that RAV 4 emits 363 grams of CO2 per mile, according to the EPA. The average annual mileage for one might be 30,000 miles, which is about 11,000 kilograms of CO2 a year, or 24,250 pounds.

Peich says part of the reason that the SmartHalo app shows the kilograms of CO2 saved is to remind bicyclists of the good they’re doing by not driving. But he has another, much bigger objective in mind, too.

"How can you turn pedals into more than just trips and into positive action? Because we’re facing extinction. It’s nature."

“One thing I’d like to do in the future is see if we can get carbon credits for this. Then, we can give them away, just like an NGO that plants trees. How can you turn pedals into more than just trips and into positive action? Because we’re facing extinction. It’s nature.”

I used the SmartHalo for dozens of rides over a few weeks and found the tracker for how much CO2 I’ve saved and the bike alarm to be the most memorable features on the app. I rarely used navigation, though I needed it less often.

I’m an avid consumer — often impulsively! — of the latest bike gadgets, and unlike the objectively ugly standalone bike computer that costs a few hundred dollars or more, the Kickstarter price for the second-generation model was just $99 (though it’s now sold out at that price).

“I want this to cost $49; I want this to be on every bicycle,” Peich says emphatically when I ask him how much the SmartHalo 2 will cost after it’s out of the Kickstarter phase.

Peich’s dream of a low-cost, mass-produced SmartHalo device may come true — if it ends up being sold in bulk to electric bike companies and integrated into the frames of the bikes.

The surge in interest in electric bikes is here. (The latest darling of the e-bike world is the alluring VanMoof electric bike, the business plan of which includes the requisite showrooms in Amsterdam, London, Berlin, Paris, San Francisco, and Brooklyn.)

Electric bicycles — despite what you think about them being a form of “cheating” — are gaining in popularity, which is an unquestionably good development in the war on traffic jams. With an increase in e-bike sales and more e-bike adoption, arrives a new segment of the population that’s new to cycling — and the longer trip that an electric bicycle enables. A longer riding range equates to more use of navigation.

Unless riders want to end up like Peich, with a $1,000 phone busted on the asphalt, they might do well to buy a SmartHalo.

“The mission of this company is to make cycling the future of urban mobility,” Peich says. “In Europe, in Germany, half of all new bikes are electric. This will be huge. There are so many people that would commute by bike to work but don’t because they don’t want to get sweaty, or it’s a bit too far.

“With electric bikes, you’re not sweaty, and the range becomes much bigger.”

“Cities around the world are investing heavily in cycling infrastructure,” Peich continues. “I wish they would go faster. They won’t remove the cycling paths after that, and they will keep adding more every year, more paths. This is going to give confidence to people to cycle.”

With SmartHalo 2 and his broader mission to get more people cycling, Peich is the best kind of shit disturber. He’s the one you don’t hear coming.

Also read: Bicycling in 2025 Will Be Different in Two Big Ways

Xavier Peich is CEO of SmartHalo and is a member of the Inverse Future 50, a group of 50 people who will shape the coming decade.