"We see the big eye socket of the dinosaur, it really starts looking like a baby.” 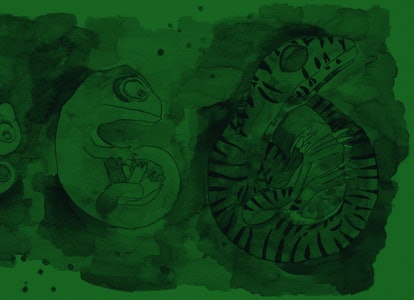 For expectant parents, a 3D ultrasound is an opportunity to glimpse the baby while it develops in the womb in fantastic detail. Scientists can have a similarly profound experience — with ancient, baby dinosaurs.

Using an advanced 3D X-ray technology called synchrotron scanning, a team of scientists was able to peer inside fossilized dinosaur eggs for the first time, revealing a trio of dinosaur embryos curled up inside.

Working through the night for days, the team was able to painstakingly reproduce an image of these embryos bone-by-bone.

In this study, published in April in the journal Scientific Reports, the research team took a closer look at a pair of Massospondylus carinatus embryos found at South Africa’s Golden Gate Highlands National Park in 1976. These dinosaurs were a kind of long-necked herbivore from the early Jurassic, some 145 million years ago.

Until now, scientists had very few tools with which to examine fossilized embryos without damaging or destroying them. But synchrotron scanning changes everything, Vincent Fernandez, a researcher at the Natural History Museum in London and co-author on the study, told Inverse at the time.

A super X-ray machine — The team used the European Synchrotron in Grenoble, France, which works by whizzing electrons around a 2769 foot ring at the speed of light to generate high-powered X-ray beams to non-destructively penetrate delicate materials — like fossils.

Using a scanner like this, scientists can see unprecedented levels of detail from their specimen, even down to individual bone cells.

Fernandez told Inverse it was like "virtually extract[ing] them from the rock."

Having such fine details meant that the team was able to virtually recreate what these tiny dinosaurs might've looked like, down to their two centimeter-long skulls. Seeing this specimen slowly come together before their eyes was a moment that sticks with Fernandez, he tells Inverse.

“I keep being impressed by the level of details we can achieve: We can see these tiny teeth, smaller than the tip of a toothpick,” he said. "I particularly love when the bones are put back in 3D, and we see the big eye socket of the dinosaur, it really starts looking like a baby.”

What did they find — In addition to how cute the baby dinosaurs looked, the team was also able to learn a lot of about their development that they wouldn't have been able to glean from the fossil alone, such as learning their apparently complete skeletons were only 60 percent developed. The team even identified a secret third embryo in their samples.

In the future, this technology can be used to estimate the incubation time for dinosaur embryos and help scientists better understand their modern counterparts.

Inverse is counting down the 20 stories that made us say 'wtf' in 2020. This is number 19. Read the original story here.

More like this
Science
5.13.2022 12:00 PM
The greatest sci-fi epic on HBO Max reveals a provocative scientific debate
By Tara Yarlagadda
Science
20 hours ago
How do dolphins maintain their glowing skin? A study reveals the surprising answer
By Jennifer Walter
Science
21 hours ago
Look: Hidden fossils reveal a microscopic creature that may be resilient to climate change
By Jennifer Walter
Related Tags
Share: