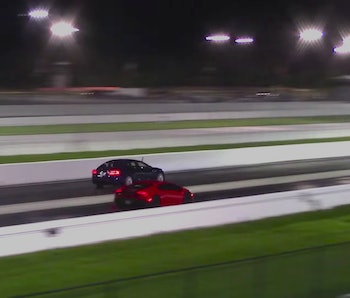 Elon Musk’s Tesla Model S, when equipped with a P100D Ludicrous battery, will destroy a Lamborghini Huracán in a drag race. A new video shows the race, and, though it’s close, and though the Huracán reaches a higher top speed, the Model S ekes out the win.

Two things have long captivated Tesla founder and CEO Elon Musk: Electric cars and fast cars. He’s been developing the former for over 25 years, and, in 1999, strapped with his PayPal money, he dropped a million bucks to get himself a McLaren F1. In 2016, he continues to meld the two: The Tesla Model S was already extraordinarily fast, but the 100 kWh P100D Ludicrous battery, which Tesla unveiled in August, takes it to a new level.

Lamborghini Huracáns were, for a time, every car-obsessed kid’s kryptonite. Unfuckwithable speed, beautiful design, unsurpassable luxury, grace. Yet, now, as the video below proves, Teslas may take the cake. They’re far faster out of the gate, just as beautiful, and more luxurious, more graceful. (Hard to beat a near-silent engine in elegance.)

Teslas, which (again) are electric and therefore don’t have gears, can apply full torque right from the get-go. The Model S, when boasting the P100D, can do zero-to-60 m.p.h. in just 2.5 seconds. Gasoline-powered engines, however, have higher torque at higher speeds. (As you can see in the video, the Huracán actually bests the Model S in top speed, but not in the quarter-mile track time. Had they raced for a half-mile, the Huracán would’ve won.) An electric car’s takeoff is like flipping a light switch, in essence: There’s no gradual transition from dark to light — it’s immediate. On. Electricity is fast.

And the P100D with the Ludicrous Mode upgrade improves yet more on the Model S’s superior acceleration. Musk and his Tesla engineering team invented an “advanced smart fuse” that allows a boatload of amps to flow without failure. They turned already extreme zero-to-60 speeds ludicrous. As in so unbelievable that it’s amusing.