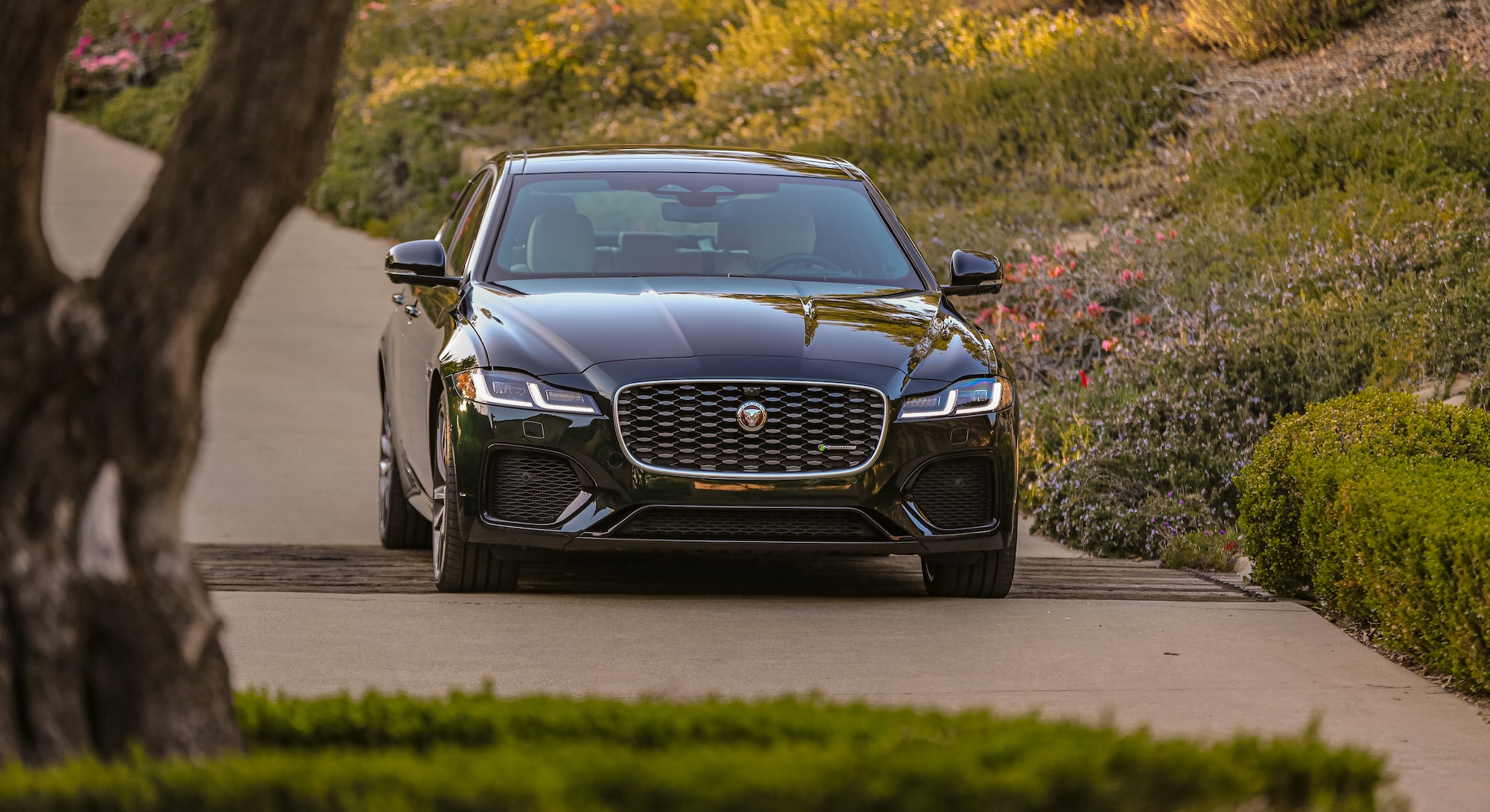 In the early days of motorsport, long before Tide and M&M graced the hoods of NASCAR rides, racing cars would be painted in national colors.

Initially, France was blue, Belgium yellow, and Germany white. The United States was red (though Italy muscled the Americans out and picked up that color a few years later). That meant when Britain began racing a couple of years later, its flag colors of red, white, and blue were already assigned to other countries.

British Racing Green evokes class and a sense of excitement, likely in no small part to the existence of James Bond. But its popularity also owes itself to the legacy of stunning British rides like the Jaguar E-Type, any Aston Martin, or the classic supercharged Bentley (which was what Bond drove in Ian Fleming's books, it should be noted).

And this is all relevant because my test car, the Jaguar XF, was also painted in British Racing Green paired with a Light Oyster interior that inferior carmakers might refer to as beige.

I wasn’t sure what to expect when I picked up my Jag at the airport one evening. I was a bit disappointed that there was no leaping Jaguar statue on the front of the car — a feature lost to, I suspect, the need to keep pedestrians from being impaled on a metal cat.

From the front, the XF seems a bit dull. Large air intakes under the headlamps feel out of place next to the slender daytime running lights, and the silver grille doesn't move me at all.

The rear end isn't much better, though I like the half-moon taillights, continuing the clever exterior lighting design that LEDs have made possible in modern road cars.

But look at the XF from the side, and it somehow comes together more naturally. The muscular creases in the hood and door panels make the car seem more agile and sporty, and the 20-inch wheels with red brake calipers brought it all together nicely. Getting that British Racing Green into the sunlight makes any car look superb.

The inside is where the XF shines, which is good because you’ll spend more time staring at the inside than the out.

A gigantic, centrally-located, horizontal 11.4-inch touchscreen dominates everything. Running Jaguar Land Rover’s rather excellent Pivi Pro infotainment platform that supports over-the-air updates, the giant touchscreen is responsive and gives access to audio and vehicle functions. Apple CarPlay and Android Auto are standard (albeit not wireless). CarPlay fills the screen, meaning it looks even more like an iPad attached to the dash when you activate that feature.

Directly below the screen is the Jaguar nameplate with “Est. 1935” and “Coventry” there to remind you of Jag’s birthdate and place, lest you forget you’re in a car with some history behind it. Then you have a dedicated climate panel with knobs for adjusting the temperature and confusing-until-you-figure-it-out controls for the seat heaters: push in on the temperature knobs to adjust that, pull to change the fan speed.

The Oyster-colored seats are comfortable and smartly appointed, with soft leather and a lovely quilted pattern. A wireless phone charger is standard, and there are large center cupholders, but interior storage is worse than you’d find in an SUV. But you didn’t buy a sedan for the storage; you bought it for fun, right?

My XF had the more powerful 296 hp, 295 lb-ft 2.0L turbocharged four-cylinder. It had plenty of pep and scored an impressive 30 mpg highway which isn't bad for a big cruiser.

My tester, an awkwardly named Jaguar XF P300 R-Dynamic SE AWD, starts at $49,995 before a whole host of add-ons drag the price kicking and screaming up to $62,695. That’s quite affordable compared to the competition, and it has everything you need with all the option boxes checked.

Charging an extra $1,200 for adaptive cruise control is incredibly annoying, but the $1,050 head-up display and $800 leather sport seats are more acceptable. Don’t check all the option boxes, and you’ll have a lovely luxury sedan for just over $50,000.

It’s also worth calling out Jaguar’s 5-year, 60,000-mile, bumper-to-bumper warranty, including all scheduled maintenance during that time. This is much better than the 3-year 36,000-mile warranties from the competition. But, if we’re honest, you aren’t buying this car for the warranty.

You are buying it for that gorgeous British Racing Green.

One Cool Detail: The Center Stack

Many luxury cars seem to focus more on the luxuriousness part than on actual usability. Many past vehicles had so many different features and functions that the dash ended up filled with buttons to control everything.

Or companies would invent entirely new control schemes to make everything work, which often didn’t work very well. But the Jaguar XF has an elegant control scheme thanks to its enormous touchscreen running the friendly and easy-to-use Pivi Pro platform, as well as a handful of straightforward controls to change the climate settings.

Between the big screen (for controlling the complicated stuff) and the controls down below (each with their own tiny screen to show the current climate settings), it’s easy to find your way around and take advantage of everything on offer.

Other luxury carmakers could learn a thing or two from this humble Jaguar.

Stay on top of the automotive revolution and sign up for Jordan Golson’s free car reviews newsletter. This review is also published in the North State Journal.