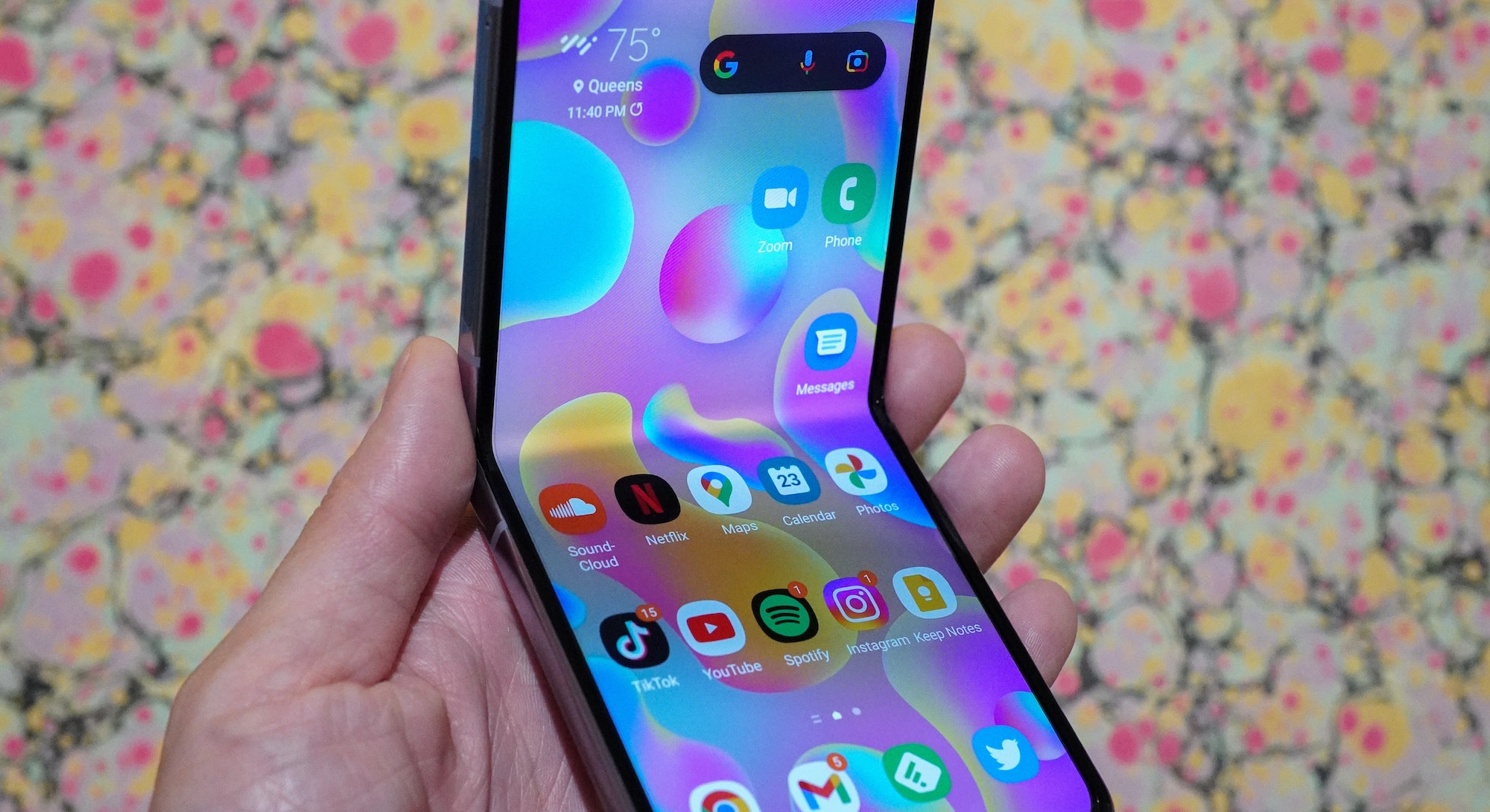 The jump from the Galaxy Z Flip to the Flip 3 was huge; Samsung overhauled nearly everything for the better and dramatically dropped the price from $1,449 to $999, making foldables palatable for the first time. The leap from Flip 3 to the Flip 4 is noticeably smaller.

The Flip 4 is the best foldable for its form factor — a phone that folds in half horizontally into a smaller one — but that’s only because nobody else is competing. At least not in the U.S. (yet). Here in the States, if you want this kind of foldable, the Flip 4 is the one to get because it’s the only one to get. The next best option is Flip 3.

Don’t get me wrong: the Flip 4 is still adorable, fun, and still a conversation starter at bars, but Samsung played it very safe this year. Is that a bad thing? That depends on whether you’ve got an older Flip or are new to foldables.

Inverse may receive a portion of sales if you purchase a product through a link in this article. We only include products that have been independently selected by Inverse’s editorial team.

You might not even notice the changes Samsung made to the Flip 4 because it mostly looks and feels like the Flip 3. The hinge is slimmer, and the body is an imperceivable couple of millimeters narrower in length and height; it’s also 5 grams lighter, though you’re unlikely to notice. The Flip 4’s “Armor aluminum” frame is flatter, and the finish is polished versus anodized on the Flip 3, which makes the new version a fingerprint magnet. I do love frosted glass instead of shiny glass, and the many color options (with Galaxy Bespoke) are enticing.

Everything else — the dual cameras, power button fingerprint sensor, speakers, USB-C port, SIM card tray, and volume buttons — are in the same locations. The Flip 4 still folds with a resistive clasp — you still can’t snap it shut to end a call like you could with old cellphones — and there’s still a pre-applied screen protector that you absolutely shouldn’t peel off.

These minor tweaks are pretty evolutionary — not necessarily a bad thing if you tend to have FOMO. The changes are more dramatic if you're coming from a first-gen Flip or the Flip 5G (technically, the Flip 2). If Flip 4 is your first foldable, it will be a fun, new experience.

Unsurprisingly, Samsung has changed nothing for Flip 4’s displays. The cover screen and foldable display are identical in size, resolution, and brightness to the ones in the Flip 3; the cover screen is a 1.9-inch Super AMOLED (512 x 260), and the foldable screen is a 6.7-inch Dynamic AMOLED 2X (2,640 x 1,080) at 120Hz. The only upgrade is the more scratch-resistant cover display that's made of Gorilla Glass Victus+.

That might sound disappointing if you were hoping for a larger cover screen like the 2.7-inch one on the Razr 5G. What bugs me most about the foldable display — and all foldable displays — is that the crease hasn’t been made less visible. The crease never disappears — you feel it every time you swipe your fingers over it. It’s less of a disappointment a few years later, and it is something you get used to quickly, but it is a persistent reminder that there are limits to bending glass in half.

The elephant in the room is, of course, the durability of the foldable screen. Despite Samsung’s claims that the Flip 4’s foldable display can “withstand over 200,000 folds before failing” which works out to “100 folds daily for five years,” it might not be worth the stress for some people. Recently, the foldable display on Input deputy editor Cheyenne MacDonald’s personal Flip 3 cracked and then broke after a year of ownership; she’s in the process of getting it replaced by Samsung. She suspects the cause is similar to what happened with our foldable Razr back in 2020: going from one extreme temperature to another. In Cheyenne’s case, she went from cold to hot environments compared to when I had gone from hot to cold. Similarly, Engadget’s Sam Rutherford had a similar one-year experience with the foldable display on his Fold 3, where the screen protector started to bubble up and cause air gaps.

There is one silver lining: replacing a broken Flip 4 foldable display only costs $29… if you also pay for an $11-per-month Samsung Care+ plan. That’s $220 less than before, even if you had a Care+ plan. Otherwise, a screen replacement is still the same $249 out-of-pocket/warranty price, which is kinda hefty.

The Flip 4 comes with the very best chip available for Android phones: the Snapdragon 8+ Gen 1. Its predecessor, the Snapdragon 8 Gen 1 found in flagship phones like the Galaxy S22 series from earlier in the year, has been criticized for its poor power consumption and overheating when it comes to running load-intensive apps like 3D games. The 8+ Gen 1 fixes those issues.

While I play mobile games semi-regularly during the week, I don’t play them continuously for hours on end. I’ll play Genshin Impact or Call of Duty Mobile (my latest addiction) for maybe 30-45 minute periods throughout the day. For my playtime, the Flip 4’s chip keeps up, and there’s minimal heat buildup.

The software just glides with every tap and touch.

And generally, Flip 4 is responsive. But so, too, was Flip 3. Samsung has optimized its version of Android 12, One UI 4.1.1, so well with its displays that the software just glides with every tap and touch. Google hasn’t even figured out how to marry Android with its Tensor chip to create such fluidity on its Pixel 6 phones.

All that power is table stakes for a flagship phone. The top reason to buy a Flip 4 is undoubtedly the form factor, but Samsung has been saying for years that the unique software optimizations are also a compelling selling point. Samsung is trying, with new additions to Flex Mode and FlexCam, where you can essentially split apps above and below the crease.

Some of these features are genuinely useful. For example, in Instagram, you can move your preview for a new Stories clip to the top half of the screen and controls to the bottom, prop the Flip 4 on a table, and then hit record. It’s great for making Reels! But support for third-party apps is limited; neither TikTok nor social media’s latest obsession, BeReal, work with this mode. The FlexCam modes, where the Flip 4 becomes a baby stand for selfies or group photos, are among the most useful. My favorite is probably the “high-angle shot” mode, where you hold the Flip 4 sideways like an old camcorder; it’s kind of goofy, but it’s a surprisingly sturdy grip for vlogging.

Other uses for the foldable display are downright gimmicky, like turning the bottom half into a tiny, cramped trackpad, which essentially makes the Flip 4 a phone-sized laptop. Running two apps split-screen is also pretty useful, but you can already do that on non-folding Android phones.

The same, more or less, applies to the software additions to the cover screen. Samsung has added some extra utility with quick replies for messages and more Quick Setting controls for Wi-Fi, Bluetooth, flashlight, and airplane mode; the Flip 3 only has controls for volume and brightness. And there are some new clock faces. But these feel like features that Samsung could have added to the Flip 3 in a software update.

With a 3,700 mAh battery on the Flip 4 (400 mAh more than the Flip 3) and the power efficiencies that come with the Snapdragon 8+ Gen 1 chip, Samsung says you can expect around three more hours of screen time. In nearly two weeks of using the Flip 4, I can say battery life is pretty standard. I could comfortably get through a single day of use from morning to evening with 10-20 percent to spare.

Three hours doesn’t sound like a substantial boost in battery life but think about when your phone is low power and all you want, or need, is an extra hour of power or even a few minutes. That’s when you’ll appreciate the longer battery life the most.

Any improvements to image quality from the wide camera can be attributed to the marginally larger pixels in its image sensor. Photos from the Flip 4’s wide camera are “brighter” and have “enhanced processing.” Samsung seems to have toned down the saturation, resulting in better highlights. HDR is upgraded, too — you can see how the sky is better exposed in the street photo below. In daylight, indoors, and in low light, the images from Flip 4 are better than those from Flip 3. Is it a lot better? Not really, but you can tell in the comparisons.

In low-light/night photos, the Flip 4 is a beat faster to finish processing night mode photos. In the below night photo comparison, you can see there’s less red and purple. This seems to be the “enhanced processing” at work. Details are sharper, too, but only if you pixel peep — and let’s be real, you’re not doing that.

Some people will lament the lack of a telephoto lens, but I’m totally fine without it. Get a Z Fold 4 or a Galaxy S22 series if you want the extra zoom. Otherwise, a wide and ultrawide are enough; the 10-megapixel, however, could use a real reboot — image quality is flat with dull colors.

Should you buy the Flip 4?

When it comes to foldables, Samsung pretty much dominates without much competition. China’s got its fair share of foldables from the likes of Xiaomi, Oppo, and Motorola, but in North America and Europe, Samsung is the only company that sells a mature foldable. Two years and four models into the Flip form factor, this feels like it. And if it’s not, then it’s very close.

Two years and four models into the Flip form factor, the Flip 4 feels like it.

How will Samsung make a Flip 5 better? A larger cover screen — okay. Better battery life, a faster chip, improved cameras? That’s to be expected every year. Dust resistance, perhaps? Slimmer bezels and maybe a more scratch-resistant foldable screen? I could see all of these planned out for the next few generations of the Flip. But in terms of major, meaningful upgrades, the future of the Flip is almost certainly going to be iterative.

If the Flip 4 is your first foldable, you're gonna have a blast; foldables are fun so long as you're okay with certain downsides that come with them. It's good that Samsung hasn't increased the price of the Flip 4, starting at $999.99. If you've got a Flip 3, you can skip this one; the upgrades are marginal. Flip 1/2 owners who are still believers will appreciate the upgrades the most. If you're just curious about the Flip’s form factor, consider the Flip 3; prices are coming down now that there’s a new model.