Amazon is building the anti-metaverse with 'ambient intelligence'

“The real world matters to customers.” 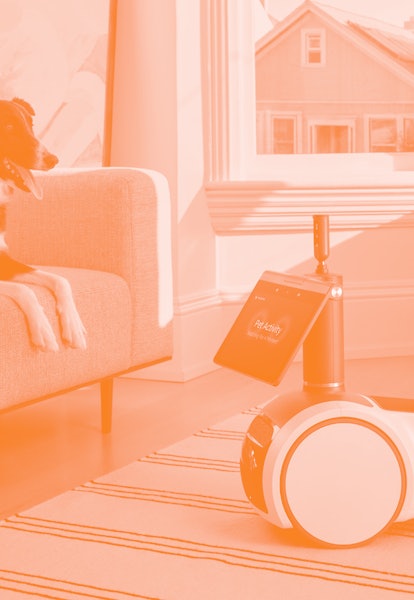 In the short hour Amazon jam packs with product releases every Fall, it can be hard to see the forest for the trees on why the company might need to sell both a sleep tracking alarm clock and, say, a robot.

But as Amazon figures out how to best offer “ambient intelligence” — products where computers and interfaces driven by screens fade into the background in favor of proactive information and natural, voice-driven interactions — filling every possible niche with its Alexa voice assistant might seem like a valid solution.

This year, Amazon framed its products around reducing distractions and limiting screen time, but its most interesting announcement might be how it’s now subtly positioning itself against the current industry obsession with mixed reality and the metaverse.

What is “ambient intelligence?”

Ambient computing, or “ambient intelligence” as Amazon specifically refers to the thinking behind its products, is about making the computer “disappear.” That can happen in different ways, but Amazon has identified three main descriptors for its own “ambiently intelligent” devices. They’re intuitive, proactive, and personalized.

The thinking goes: Technology should be intuitive to use or figure out how to use. It should be proactive about what information it shares with you and take action on its own so you can limit your time using it. And technology should be personalized, knowing what it needs to know about you to be useful, and fitting into your life in a way that makes sense to you.

Talking to Alexa through an Echo speaker is frequently as simple as asking a question. Features like “Alexa Hunches” let you proactively know the state of your various smart home devices, and can even take action on them — turning them off or changing their settings — without you having to ask. At Amazon’s event, Dave Limp, the company’s senior vice president of devices and services shared that 90 percent of Alexa routines (programmable collections of actions for smart home devices) are initiated without a customer saying anything. That impressive statistic requires some setup on the part of the user, but it suggests that Amazon’s vision for a future with even less direct interactions with technology is feasible — if not already here for some people.

That’s very different from the vision of a company like Meta, which imagines a less obtrusive computing future enabled by augmented reality, but is committing to a virtual reality present that involves wearing $1,000 displays on your face to go to work, hang out with friends, and have fun. The Meta Quest Pro headset could end up being totally impressive, but I can’t say spending all day inside one sounds more appealing than a world where my interactions with screens are limited by default.

As Limp pointedly commented in his closing remarks at the Amazon event, “the real world matters to customers.” Amazon’s products are an attempt to keep people planted here in the real world, solving things “behind the scenes” rather than dragging them into another screen. Digital well-being features aside, most other companies are looking in a very different direction.

All eyes on the next internet

Meta is not alone in toying with VR, AR, and a future mobile internet that could connect them all. Google has made it clear that it’s going to try and make AR glasses again, plenty of also-ran corporations have their own ideas about the metaverse, and Apple has all but announced intentions to make AR and VR products for years with signs pointing to a possible January release of its own mixed reality headset. These plans only help to make Amazon’s case stronger.

But what’s not on the surface of Amazon’s pitch, but implicit in all of its new products, is what’s required to make “ambient intelligence” work: a lot of cameras, a lot of microphones, and a pervasive internet connection throughout your home.

Adding Eero mesh network extending capabilities to Echo Dot smart speakers is a clever way to make building out your smart home easier, and makes putting an Echo in every room that much more enticing. Easier networking was a mini theme of the event; Amazon also announced new Eero PoE 6 routers which can be powered over Ethernet and placed anywhere you can run cable. Back on the always-on microphone side of things, both the Fire TV Cube and Fire TV Omni QLED Series TVs make having Alexa to control your media center that much better.

“[Amazon’s] vision of technology requires you to have a fundamentally different relationship with the tech in your life...”

Amazon has privacy in mind for all of its new products, from simple things like shutters for cameras on its Echo Show smart displays to end-to-end encryption for the systems actually processing all the video and audio the company captures (Amazon also does on-device processing). But it doesn’t change the fact that the company’s vision of technology requires you to have a fundamentally different relationship with the tech in your life, one where you’re constantly observed rather than interacting with your computer or phone when you please. Not to say any of these metaverse ideas will require less surveillance, but at least for now, you can take the headset off.

Increasingly, two visions around the future of how we’ll interact with technology and each other are coming into view: one involves bringing ourselves even closer to the screens we already have and the other consists of stuffing so much proactive technology into the world around us that we never really have to interact with computers directly. It’s hard to say whether one will be better than the other or whether either will even come to fruition, but it seems like Amazon now knows there could be value in styling itself as an alternative to the metaverse hype.