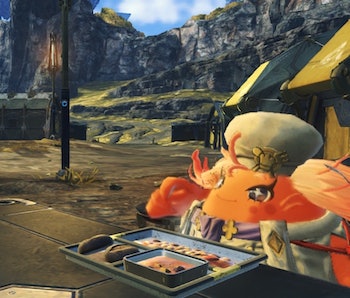 Xenoblade Chronicles 3 is now over a month old. That doesn’t mean the internet is ready for spoilers, though.

Internet icon videogamedunkey (a.k.a., Dunkey) recently released a new video about the seemingly endless JRPG. Some see it as a “hit piece” on Xenoblade Chronicles 3. Others see it as an inconsiderate use of spoilers. Fans of the game are mad about more than just the content of his video. Some are just beginning their journey through Aionios, so of course, they wouldn’t want the story spoiled. However, the reasons for dunking on Dunkey range from the spoiler he posted on Twitter to the reaction from his fanbase. All things considered, it’s pretty complicated. So let’s dig in.

“Out of context pop-shots, endgame spoilers with no spoiler warning, just an altogether meanspirited and unfunny mess of a video,” one unamused viewer wrote. “You wouldn't criticize a musical because it has singing or flamboyant characters, you'd respect the genre and artform for what it is and simply say it isn't for me.”

“Why can't that same modicum of respect be given to JRPGs?” they asked.

Any long-time Dunkey fan should know that he reserves his serious critiques for his “dunkview” videos. All the other gaming videos are meant to quickly encapsulate what it was like to play the game for him, which his Xenoblade Chronicles 3 video does. Many of the criticisms are fair points that other games journalists have also brought up. You have to hear voice lines like Lanz’s remarks when finding a “rare doodad” or Sena’s grating “I’m the girl with the gall!” repeated over and over again throughout your 100-hour playthrough.

Those who just watched the video are missing the part of the outrage that stems from a spoiler Dunkey posted on his Twitter after his upload without any warning. He apparently revealed a heavy Xenoblade Chronicles 3 spoiler, which angered those who hadn’t finished the game and had part of the ending spoiled for them. (Don’t click the link unless you want to see the spoiler.) Dunkey has since deleted the post, but his fans are now spreading the spoiler in Xenoblade fans’ replies to annoy them.

His video also contains Xenoblade Chronicles 3 spoilers, though the lack of context might make it difficult for them to be classified as “real spoilers.” It includes content all the way into Chapter 5, which is more than halfway through the story. Dunkey fans argue that those planning on playing the game shouldn’t have clicked the video if they didn’t want any spoilers.

At the same time, there wasn’t any warning that spoilers would be included.

Others claim that the problem isn’t even Dunkey himself or the spoilers, but his fans. Dunkey doesn’t need to like Xenoblade Chronicles 3. However, when mean-spirited fans take a content creator’s opinion and push it in others’ faces as a truth, then it becomes a problem.

“What [people] don't understand is that nobody cares about the Dunkey vid itself,” one Twitter user wrote. “The concern is that his huge fanbase of drones will latch onto the cherry-picking/low-hanging fruit jokes in the video, and they'll become talking points among those that haven't played it for years.”

Many of the scenes are taken out of context and rightfully seem ridiculous in the video. However, anyone blindly judging a game based on a 10-minute video and making it their opinion doesn’t seem worth raging at anyway.

Dunkey has a record of disliking JRPGs such as Final Fantasy VII Remake, Octopath Traveler, and Xenoblade Chronicles 2. His videos sometimes include JRPG soundtracks, but enjoying music and enjoying a game are separate experiences that shouldn’t be used to deduct if someone truly enjoys a piece of media or not. He also dunks on anime grunts. If you are so used to anime grunts that you don’t even think about them, then he might not be the game critic to believe about whether a JRPG is worth playing or not.

This is all Dunkey has said about his video’s reception at press time:

More like this
Gaming
Sep. 13, 2022
Everything we know about the Xenoblade Chronicles 3 Expansion Pass
By Jess Reyes
Gaming
23 hours ago
E3 2023 could finally fix the worst thing about gaming's biggest convention
By Joseph Yaden
Gaming
22 hours ago
All 12 Yakuza games, ranked from worst to best
By Hayes Madsen
Related Tags
Share: