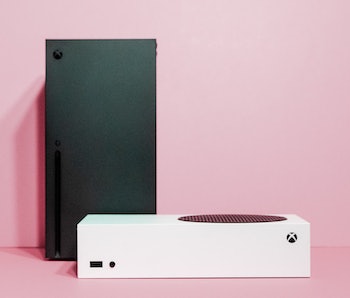 "Where is the Xbox Series X?" is a phrase your significant other may have heard you murmur while tossing and turning in your sleep recently, bothered by the recurring dream where you add the Xbox Series X to your cart, but it vanishes before you can complete checkout.

Countless other gamers have gotten their hands on the console, so how can you join their lofty ranks? The best thing you can do for next time is to be prepared. If you learn what places are about to drop the Xbox Series X, you can likely get the console in time to play exclusives like She Dreams Elsewhere and Halo: Infinite.

Here's every store that's set to sell the Xbox Series X in the near future.

Before you look for your console: How did gaming get you through the pandemic? We want to hear from you! Take this quick Inverse survey.

Target has been steadily releasing new consoles. According to one February 21 rumor, another drop should be happening sometime this week. Some stores have reportedly received a new shipment of the Xbox Series X already, making a more official drop imminent.

You'll need to purchase the console online first or call your local store and reserve one. You cannot waltz into any Target demanding an Xbox Series X. When available, you can purchase it online here.

Everyone's favorite retailer to trade in your old games in exchange for a fraction of what they are actually worth is currently your best bet to get your hands on an Xbox Series X. After selling out of the Series X in late January, they have yet to restock.

If you want a console from GameStop, the best plan is to turn on notifications for their Twitter account. The company often tweets out when consoles will be available before placing them on their online storefront. You can find their Twitter which you can find right here.

Update — February 26, 2:15 p.m. ET: The Verge reports that Walmart will have stock in Series X consoles at 3pm ET today. Here's the direct link to the Series X.

America's biggest shopping destination isn't the first place you should look to for a new Xbox Series X. The megastore sold out of the console again in early February. They might restock sometime during the week of February 22.

If and when they're available, you will be able to purchase them right here.

It should be noted that all consoles purchased through Antonline will cost a bit more than most. They'll be packaged with extra goodies like controllers and Games Pass subscriptions, which accounts for the price increase.

When it's available, you can purchase it right here.

As a major electronics retailer, Best Buy regularly has flashes of availability each week. They're expected to make the Xbox Series X available yet again this week. On February 21, a customer service chat said the console would be restocked in two to three days from the time of the chat, meaning you should check the website on February 23 and 24. When available, you can purchase the console right here.

Alternatively, you can pick up the Xbox Series S from the retailer right now. It remains available in their shop.

Amazon has been steadily dropping PS5 consoles throughout February. When there's a PS5 drop, an Xbox Series X drop can't be far behind. Keep your eyes peeled to Amazon's social channels and the Xbox Series X.

When available, you can purchase it right here.

If these many tips didn't lead you to your destined Xbox Series X, there are numerous tools and tricks that you can employ to enhance your odds next time. The best thing you can do to stay abreast of next-gen sales is to follow a few Twitter accounts. Twitter users like @Wario64, @Spieltimes, and @YtNextGenGaming will always know when a console is on the way.

The Stock Informer Discord channel is a great place to be the first to hear when a drop is incoming.

The browser extension OctoShop will inform you if another store has an Xbox in stock while you're looking at an online listing. Alternatively, PopFindr can tell you if any nearby stores have consoles in stock that just went unreported. There are a lot of ways to get an Xbox in your hands.