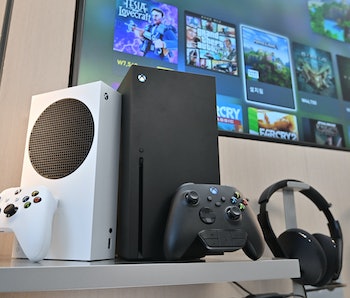 The new Xbox consoles are just as hard to find as the PlayStation 5. While the PS5 has sold more units, the Xbox Series X and S have been out of stock since their November 10 release. Whether you want the powerful Xbox Series X or the slightly weaker but much cheaper Xbox Series S, you've had to acutely monitor various retailers in hopes of getting a brand new Xbox soon.

While it's too late to get the next-gen Xbox systems in time for Christmas online, you can still get one by January 2021 if you are keeping up with the latest console restocks. If you want to get an Xbox Series X or Xbox Series S before Christmas and play games like Gears Tactics, Call of the Sea, and The Falconeer, these are the retailers that you should keep an eye on and the online tools you can use to track restocks.

Several websites, Twitter accounts, and extensions that keep track of restocks exist, so you can use those to find an Xbox Series X or Xbox Series S console right when they are restocked. PopFindr helps you see the inventory at local stores if you're planning to pick a console up in person.

If you're getting the console online, then an extension like OctoShop that's also location-based and frequently checks several retailers is also incredibly useful. When it comes to Twitter accounts, set notifications on @Wario64, who consistently tweets when new consoles become available. The Stock Informer Discord channel can also help you track restocks. If you want to forgo those tools though, you'll have to frequently refresh the store pages of the following retailers.

Major tech retailers Best Buy has restored both Xbox consoles multiple times since they came out on November 10. The latest restock happened at 9 a.m. on December 15 and was actually announced beforehand. Those who were able to pre-order there should get their consoles by Christmas, though both store pages now just say that more stock is "coming soon."

Sadly, Best Buy has not had another major round of Xbox console restocks since then, and may not for the rest of 2020. All we can do now is keep notifications on for the Xbox Series X and Xbox Series S Best Buy store pages on the off chance that more consoles become available before the end of 2020.

Target has sporadically listed new Xbox Series X and Xbox Series S units since their launch, though the company often doesn't make any sort of announcements online for such restocks. Most recently, there were reports of consoles being available during the afternoon on December 21, 2020. There is no word one when Target will restock these next-gen Xbox systems again.

Online, you'll want to keep an eye on their official Xbox Series X and Xbox Series S store pages. Target has also been one of the retailers to more frequently have some stock in store, so you should use Popfindr to check if any units are available at your Target, or visit the store for yourself.

Currently, all four bundles are listed as out of stock, though some consoles were available on the website on December 21. It is unknown when Newegg will restock, so keep notifications on for them and keep an eye on Newegg's Twitter for any possible announcements.

As a gaming-focused retailer, a lot of gamers will be looking to get their next-generation consoles at GameStop. They have restocked the Xbox consoles quite a few times since November 10. The latest in-store restock on December 12 even caused issues for employees, as reported by Bloomberg, because they only got an hour's notice on the restock and dozens of people came into the tiny stores looking to get a next-gen console. They also restocked online on December 18.

You might have some luck calling your local GameStop store to learn when they expect another restock. As for online shoppers, GameStop has not yet confirmed when the next restock will happen. While the pages are currently down, the Xbox Series X and Xbox Series S store pages will go live at their respective links when restocked.

Walmart is another major retailer that has consistently restocked the new Xbox and PlayStation consoles since they released in November 2020. According to @RestockPings, Walmart will now only sell the Xbox Series X and Xbox Series S online, so you won't be able to get them in-store. They restocked at 3 p.m. Eastern on December 15 and haven't listed more since.

Going to the store page for the Xbox Series X or Xbox Series S will tell you that the item is unavailable or on backorder. Keep an eye on both official and restock account if you want to know when Walmart will have more Xbox systems.

Amazon doesn't announce their restocks, but have added more stock since the system's launch. They like to do it around other restocks too, so set notifications for them while others are restocking. Outside of setting up all of the aforementioned tools, you can simply just monitor and refresh the Xbox Series X and Xbox Series S pages on Amazon.

This article was originally published on Dec. 15, 2020