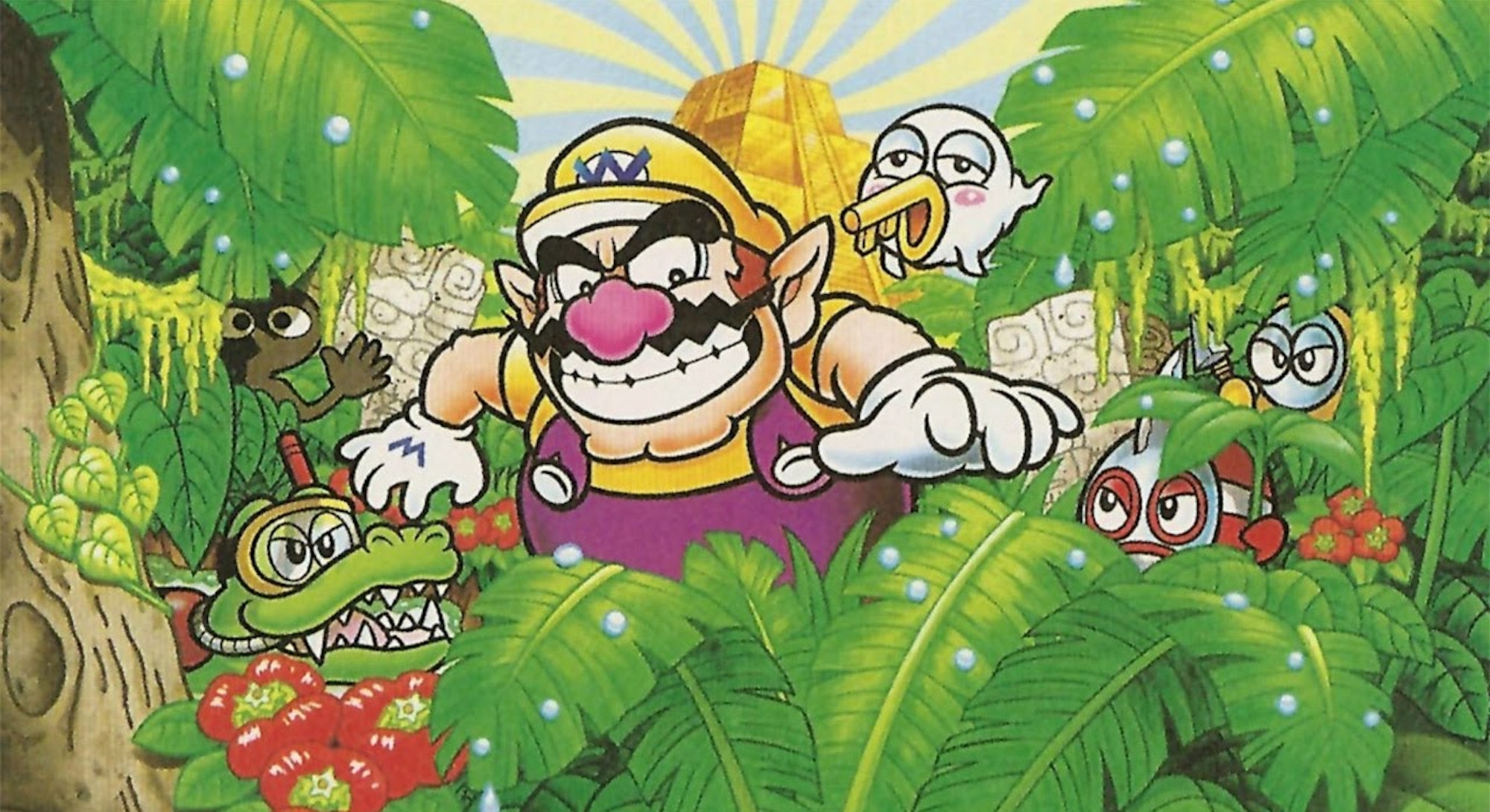 One of the most brilliant openings in any Nintendo game ever depicts a rad-looking convertible speeding towards a mysterious treasure-filled pyramid.

As the camera pans to and fro, the vibe feels like a comic book or groovy anime. You can’t help but think this is the story of some daring tough guy or even a superhero. Is it Indiana Jones? Batman? When it’s finally revealed that it’s the pink-nosed, mustachioed Wario, there’s a tremendous feeling of disappointment — but you can’t help but laugh hysterically. This charming bait-and-switch is so much more interesting than anything Wario’s vanilla counterpart has ever done.

Immediately, Wario Land 4 is better than any 2D Mario game. And it only gets better.

Nintendo is home to some of the most creative and innovative game developers, but titles like Super Mario World do little to defy expectations even when they retain Nintendo’s signature magic. Since Mario is such a popular character, his makers refrain from implementing weird ideas. More modern 3D entries explore brilliant new mechanics and stories, but by and large, the Mario franchise plays it safe.

Wario, however, DGAF. (In Super Smash Bros., he will literally fart on you!)

Wario Land 4 for the Game Boy Advance is a great example of Nintendo letting itself be as weird and wacky as possible. The end result is nothing short of brilliant.

2D Mario games are good. Most of them are great. Few people would disagree. They have all the ingredients that gamers love: beautiful visuals, stellar music, and of course, satisfying gameplay. Even if you don’t love the content within each Mario game, you can’t deny their resounding significance for the entire video game medium.

Games like Super Mario Bros. 3 are the bedrock for the platforming genre as a whole, but Wario Land 4 does nearly everything better. Everything from its music and boss design to art direction, humor, and gameplay is more interesting, offering a far more unique and memorable experience.

Wario Land 4 expands upon all of the best ideas from 2D Mario platformers, taking some bold risks in the process. Mario games always feel like they’re playing it safe, appealing to the widest audience possible to maximize sales, even when they innovate in astounding ways.

The Mario franchise’s generic central premise (saving a damsel in distress) is so much less interesting than Wario’s insatiable lust for gold. During the opening segment of Wario Land 4, you get a clear sense of Wario’s personality. Everything from the way this cutscene is edited to the music and presentation is unorthodox, bizarre, and amusing. It’s instantly more lovable than any of the 2D Mario games because Wario is a creepy man we love to hate.

One of the most inventive things about Wario Land 4 is that it requires you to run back through levels in reverse before the countdown hits zero. This underappreciated and deceptively simple mechanic has a major impact on the entire experience.

It also means the levels had to be designed to work forwards and backward, which must have been a unique development challenge. Not only does this novel approach break up the pace of a standard 2D platformer, but it also feels incredibly rewarding. There are certain areas of a level that you can only reach on your return trip.

As you make your way back to the beginning of a stage, you can risk checking out a newly opened area ... if you think you have enough time left. This gives you a reason to explore — and a reward for being quick.

If you don’t want to risk exploring a new section for fear of running out of time, that’s fine, but skilled players still have something to work towards. There’s this “A-ha!” moment every time you get to a spot that was previously inaccessible.

It never stops being satisfying.

On top of all that, the timed mechanic ensures the pacing is balanced. During the first half of a level, you’re free to take as much time as you need, but on your way back, you must be on your toes. Most 2D Mario games have timers throughout, but it never feels like you have to hurry since you often get more than enough time. Wario Land 4 flips the idea of timed levels on its head, offering a sense of urgency and variety that always feels balanced.

The weirder, the better

Right away, you get a clear sense of its wacky tone from the opening cutscene. The musical score there also sounds like Gospel music, with a boisterous woman on lead vocals laying down the groove. Yet the audio quality blasting through the GBA speakers is absolutely terrible. Somehow, this only adds to the game’s charm.

How can you not laugh at the cacophony?

The creature design is downright creepy in some cases, blowing anything from 2D Mario games out of the water. One of the earlier bosses, Spoiled Rotten, is an eggplant that transforms into a grotesque monstrosity that will haunt your nightmares. As you deal damage to this foe during the earlier stages, you get horrifying glimpses at its final form before it fully becomes an abomination.

All of the bosses follow a similar formula, creating a sense of anticipation ahead of their inevitable evolution. Others like the Cuckoo Condor are hilariously lame. Cuckoo Condor remains hidden within a cuckoo clock for most of the fight, so you brace yourself for an awful reveal of some demonic-looking bird. But what comes out is the most anticlimactic, stupid-looking creature ever.

We do have to give credit where credit is due: Wario’s affable nemesis Mario has starred in dozens of influential and important platformers that have shaped the video game industry for the better. Games like Super Mario World and Super Mario Bros. 3 have gotten so much well-deserved praise. Specifically, Super Mario World has one of the most vibrant art styles of the entire series that really makes it pop.

But Wario Land 4 doesn’t get the recognition it deserves as a funnier experience with more innovative, albeit risky design choices. Wario may be an intentionally offputting character, but that’s an essential part of his charm. And the bonkers nature of Wario Land 4 is an artful reflection of the dark foil that is Wario.

If only Nintendo would let me play it on the Switch.