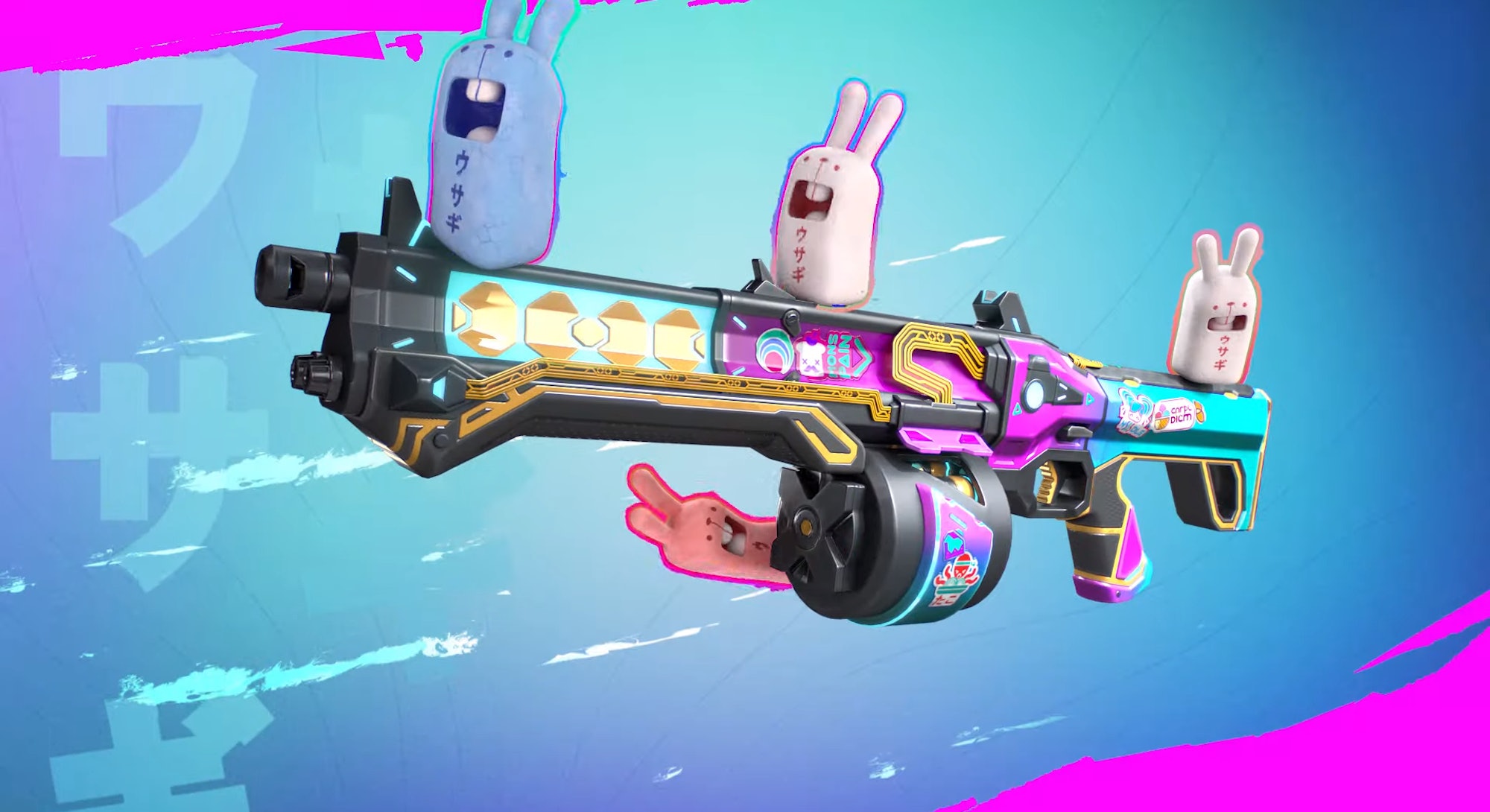 Valorant Act II adds a dose of color and chaos to the somewhat serious shooter with the new free-for-all deathmatch mode and the new agent Killjoy. The colorful new tone comes across best in Glitchpop, a new skinline that's included with the August 4 Act II update perhaps best described as cyberpunk, where players can slap silly corporate stickers on their destructive weapons. Not only does Glitchpop's origins have an interesting origin story behind the scenes at Riot Games, but there's an untold story hinting at the dystopian nature of Valorant's world.

In an exclusive interview with Inverse, Senior Weapons Artist Chris Stone and Concept Artist Sean Bigham reveal the inspiring origins behind Glitchpop and how it influences the lore of Valorant.

“The skinline leads into the dystopian future where death has no consequences and so people are buying guns,” Stone tells Inverse. “Let’s say you walk into a shop and buy a plain gun. How do you stand out from everybody else in this new mega-city run by mega-corporations?" Stone's water bottle, littered with all sorts of stickers, provided a small measure of inspiration in terms of how people in Valorant's world might trick out their possessions as a means of small-scale self-expression.

"You want to feel different from everybody else," Stone says. "You really want people to notice your accessories … To hit that dystopian feel of the world, all these mega-corps now are trying to skew towards younger and younger demographics." The end result is marketing that skews towards younger demographics with a kind of "tacky ... corporate imagery," but everything also hints at the "exploitation of workers" on the fringes.

These are the kinds of observations and decisions that influenced Glitchpop’s more vibrant design, especially in terms of the stickers players can see on guns. If everybody in this world gets the same guns, how else are they going to stand out?

While Bigham explains that the artists went back and forth on how corporate-looking or cutesy to make the individual skins and stickers, he thinks Glitchpop's unique style was “pulled off pretty well” by balancing the "corporate" with the "playful," a puzzling juxtaposition perfectly suited to a dystopia full of mega-corporations.

For a more in-depth look at how Glitchpop was born, read the following Q&A with Valorant Senior Weapons Artist Chris Stone and Concept Artist Sean Bigham.

Inverse: Was Glitchpop a skinline you had in mind for Act II from the get-go? Or did it just happen to come together?

Chris Stone: When working on another unrelated skinline, we asked an artist ‘Hey, we want to take this skin line and we want you to do X to it.’ He came back with a design called Megapunk, which is not what we had asked for. Something was lost in translation, and that's all we got. We didn't know what it was, so we shared it on our internal Slack. A lot of our artists on the team fell in love with how unique it was and how different it felt from our early skins.

It didn't really have a thematic tie to it, so we were like ‘Can we go cyberpunk with it?’ We tried some cyberpunk stuff, but we felt like it still didn't have a nice theme or hook to make it feel unique from everything else. That’s when we started developing this world of Glitchpop, the stickers, and that whole process. It was really a very organic process and it wasn't something we initially set out to make.

An accident turned into figuring out what we liked about that accidental concept, and then into Glitchpop. It wasn’t planned for Act 2 when it first started. After we were finished, our team figured out where we should actually release it in the release calendar.

What were some of those initial design challenges?

Sean Bigham: One of our internal concepts was an internal marquee of how the Megapunk skin was really conceived. Then it evolved into doing a version that we provided to our external partner to play with and see what they could do with it. There were some things we liked with this particular weapon, but we wanted to change a few things and see where we could take it from using this as a jumping-off point.

Then we go through a process of coming up with a lot of different variations, pulling from different aspects of the weapon, and setting some key hallmarks that we just want to spread out throughout the gun more evenly and tell a more of a logical story throughout it. As this progressed, we ended up actually moving back closer to the original weapon.

The main process followed very closely to how [Megapunk’s creator] did his original design. We did a base version of the weapon uncolored and uncluttered without stickers or anything. Then we stylized it up. That’s the process that we set forward with when designing the rest of the guns.

Things we ended up pulling from that original idea were more of these inlaid copper wire detailings and the actual copper wires breaking throughout, telling more of the visual stories of how this weapon operates.nOnce that was figured out, then we ended up bringing in a bunch of color explorations.

Originally there were decals or some big graphic shapes on the gun and a lot more high-frequency detail. We found in the process of doing these concepts that the stickers would get lost, so we had to try to think of interesting ways to make the stickers stand out because they were a big, sort of personalized, standout aspect of this weapon line.

Opting for more simple gradients, the final version ended up being a simple gradient going from front to back so the stickers can read a lot more clearly. From that, they're able to have visual pillar points, and we have clear directions as to how to proceed with the other weapons and make changes where appropriate. That guide is unique in its own way but still feels like it's part of the cohesive line.

Stone: With those projectors in early concepts, we kept on asking ourselves a question: If we add something to this gun, like if we take this stock gun that you could buy off the shelf in the future and people are personalizing and customizing it, why is every element present on the gun? So with those projectors and copper wires, the idea is that on the right side when you inspect the gun, we have the battery pack on the Bulldog. Then, that battery pack has a wire that connects around to the hologram projector, so that's what powers that.

From the hologram projector, you have this copper wire that goes down to the magazine and there's a little light there. The idea is that if the magazine isn't seated properly or it's taken out or not ready to fire, that light could turn off. Then you have the wires that go down to the barrel of the Bulldog, and those wires would control the hologram muzzle flash, your personalized muzzle flash in the future with colorful stuff.

We're really just trying to think as much as possible about why people are doing this to their guns in the future, and having those pillars, even if we don't say it explicitly. It helped to enhance the design and helped to make that propagation easier to other gun lines. A challenge on the Frenzy was that surface area-wise, everything's so compact. Because it's a gun that you can’t aim down the scope on, we tossed the projector on the rear and projected directly into the player. It was really fun to think about. If a gun is smaller but doesn't have certain features that our rifle has, how can we swap around some design elements to work in a more constrained space?

For a closer look at the new Glitchpop skinline, take a look at Inverse's exclusive breakdown.