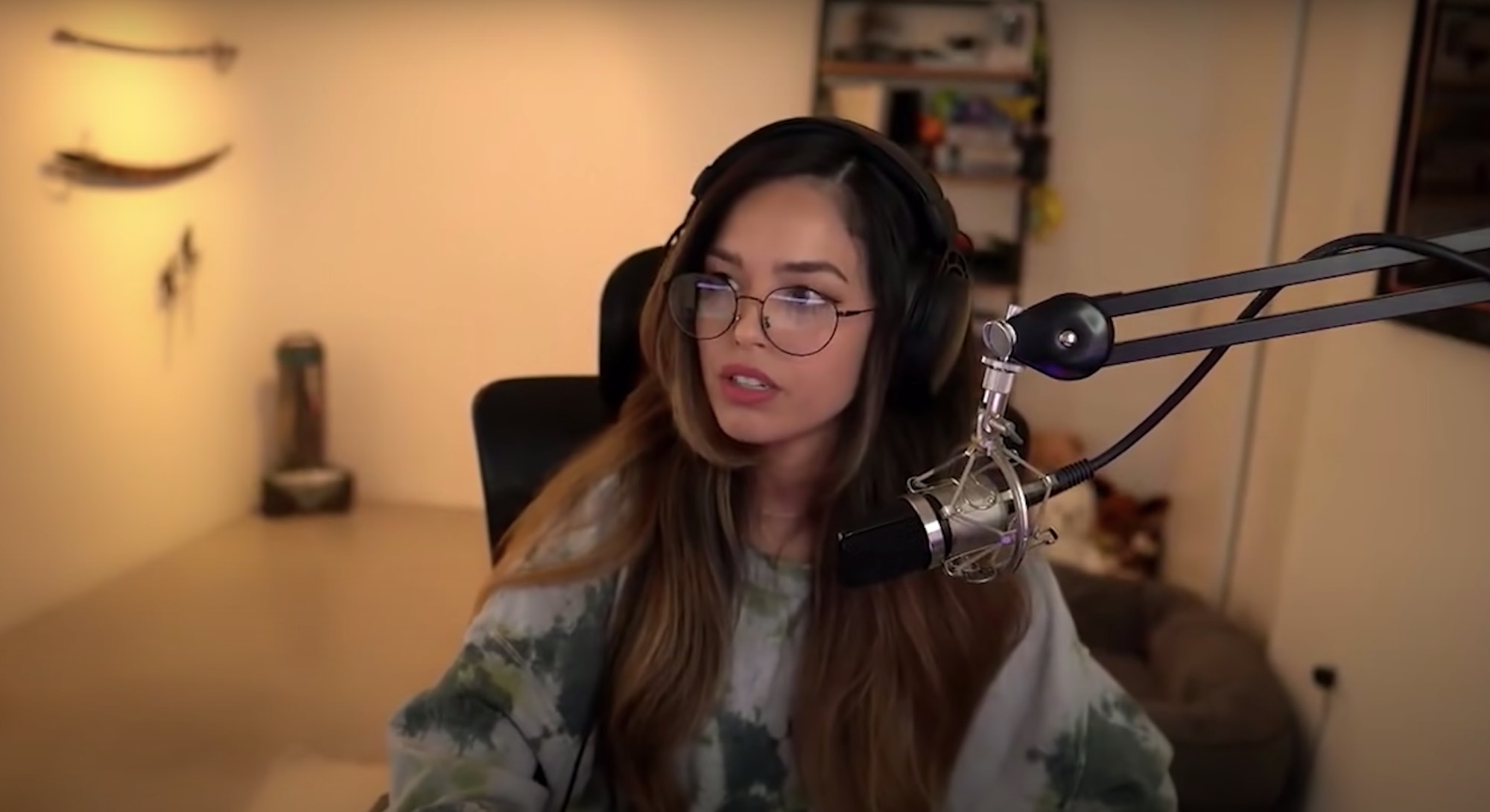 On October 19, Rachel Hofstetter, known to her 3.5 million YouTube followers as Valkyrae, made an unexpected announcement.

The 29-year-old video game streamer best-known for playing Among Us with Alexandria Ocasio-Cortez was selling a new product called RFLCT, a skincare line designed to protect its users from the electronic blue light emitted by phones or screens.

“I wanted to create something that would help not just myself, but everybody with a life in front of screens,” Hofstetter wrote in a now-deleted tweet, adding that RFLCT had been in development for more than two years.

The internet did not react kindly.

“I do enjoy being a fan of Rae & everyone, but this is 100% taking advantage of an impressionable young audience to peddle pseudoscience,” wrote one Twitter user.

So is RFLCT just a cash grab based on Valkyrae’s online popularity and good looks? Dr. Michelle Wong, an Australia-based chemistry Ph.D. and cosmetic chemist with 290,000 YouTube subscribers, agrees that blue light skincare solves a “problem” that doesn’t actually exist. “Based on the current evidence, they're not very damaging to your skin,” Wong tells Inverse.

What started out as a seemingly innocuous merch announcement has snowballed into a PR snafu, but Hofstetter is just part of a more worrying trend.

As streamers and influencers use their popularity to expand into new markets like skincare, it’s exposing fans to junk science and questionable products you wouldn’t expect to see on a video game stream.

The science behind RFLCT

Blue light can harm your eyes, but what about your skin?

Blue light is a common form of electromagnetic energy, traveling through the air in short high-energy waves. Though blue light does emanate from electronic screens, the main source that we receive it from is from the sun.

There are proven detrimental side effects of blue light exposure — but not for your skin. A 2019 study from the National Library of Medicine concluded that blue light from devices caused users to blink less, leading to digital eye strain. The National Academy of Sciences concluded in 2015 that light from screens can impact your sleep cycle and circadian rhythm.

The RFLCT site claims that a patented “blue light prevention formula” in its facial cleanser, lip balm, eye mask, and face moisturizer is “a supercharged antioxidant that shields your skin from blue light damage.”

However, Wong says even gamers who spend hours or even days in front of their computers aren’t getting enough blue light to have a negative impact on their skin.

“It takes days or months to receive the same amount of blue light from a screen that you'd get in minutes from the sun,” she says.

RFLCT products use an antioxidant formula, which Wong notes works “in theory” by “intercepting free radicals caused by blue light in the skin.” However, these antioxidants “need to get into the skin to work” and there’s little evidence to suggest these products actually do that.

“There isn't much evidence that the final formulations have been tested,” Wong says.

While Hofstetter’s RFLCT products range in price from $12 to $24 — moderate compared to other lines if you’ve ever stepped into an Ulta or Sephora store — the product positioning overstates the importance and efficacy of blue light skincare.

“While the RFLCT products are pretty reasonably priced, the marketing does also indirectly promote other blue light products that can be far more expensive,” Wong says. “The focus on blue light can also distract from other skincare interventions that are a lot better supported by evidence, such as wearing sunscreen and using approved acne treatments.”

This year has seen Hofstetter’s star continue to rise, with the streamer appearing in a Machine Gun Kelly music video, becoming a co-owner of esports organization 100 Thieves, and starring in a League of Legends hype video alongside Lil Nas X.

Nicknamed the “Queen of YouTube” by The New York Times, her first drop of branded clothing in September 2021 had more 20,000 orders on the first day, potentially generating between $600,000 and $1 million in revenue, according to estimates from gaming site Dexerto.

Makeup and skincare have also emerged as a remarkably profitable side hustle for online content creators. In 2019, controversial YouTubers Jeffree Star and Shane Dawson’s “Conspiracy” collection of make-up products generated $35 million in revenue, according to Dawson’s YouTube docu-series.

Though there are makeup brands targeted at gamers, like Gamer Glam Cosmetics and Game Beauty, the potential market for these products remains relatively untapped. That’s where RFLCT looked to step in.

The line is a partnership between Hoffstetter and Ideavation Labs, whose official site describes the company as a “single-source resource for branded promotional products” which has worked with brands like Coca-Cola, FedEx and Home Depot.

Hofstetter, Ideavation, RFLCT, and 100 Thieves did not respond to multiple requests for comment from Inverse.

The timeline — Much of the controversy currently surrounding RFLCT sprung from some of the original verbiage on the line’s official site.

The Terms of Service for RFLCT state it “was not responsible if information made available on this site is not accurate, complete or current,” before it was changed sometime around October 20, according to archives on the Wayback Machine — a day after Hofstetter’s announcement.

The website FAQ originally claimed that “blue light emitted from digital screens can damage your skin,” before it was removed on October 25 and replaced with quotes from a 2020 Allure article that recommends sunscreens to protect against blue light.

Wong notes the updated version of the page “doesn't actually support the importance of screen protection.”

As the news spread online, other influencers openly questioned the validity of RFLCT products, including one of Hofstetter’s past collaborators.

Hasan Abi, a political content creator who also took part in last year’s AOC Among Us event with Hofstetter, expressed his skepticism in an October 19 stream.

“I don’t believe the fucking blue light is destroying your skin in the way the RFLCT product presents itself,” Abi says in the stream.

In response to the blowback, Hofstetter shared a video on Twitter on October 23, where she said “all the hate, doubt, concerns, and criticism is all warranted and valid.” She has since deleted the tweet.

She also expressed her disappointment that the RFLCT website “lacked a lot of information.”

Later that day, Hofstetter streamed for a half-hour on YouTube to discuss the controversy. She claimed that RFLCT did its own research on blue light, but it couldn’t be released because it was “trademarked and might be released to other companies.”

On October 28, streamer Atrioc accidentally revealed what appear to be Discord DMs between Hofstetter and Twitch personality Ludwig Ahgren, in which Hofstetter and Ahgren appear discuss the fallout of the deal. Screenshots of the alleged Discord DMs quickly made their way onto other social media platforms.

“I feel like they’re playing a long game and don’t want to show any studies, but do want to use your reputation to sell product in the short term, which is just shitty for you,” Ahgren appears to say in the screenshots.

“I should have asked more questions, I just thought it was obvious that it would be there,” Hofstetter appears to say in response. “I'm just gunna embrace the scammer life, get out of the contract and admit I was an idiot."

Hofstetter also appears to say cosmetics chain Ulta invested $4 million in the RFLCT line, but that is an assertion Inverse cannot confirm at this time.

For the time being, Hofstetter seems to have emerged from the situation relatively unscathed. She even gained more than 10,000 followers on YouTube since the RFLCT reveal, according to SocialBlade.

Still, Wong advises those interested in preventative skincare to do their homework and not fall for flashy messaging and high-profile collabs.

“Skincare has really taken off during the pandemic since so many people were stuck at home, so it's been a good chance for people to cash in on the trend,” Wong tells Inverse.

“Look for clinical studies on the final products, as well as ingredients that are capable of delivering the promised benefits. Companies with a marketing strategy that centers around fear-mongering are usually pretty dubious.”