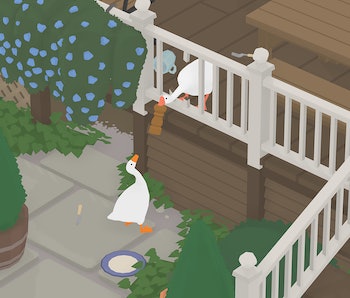 Untitled Goose Game went viral in September 2019, garnering the attention of celebrities like Chrissy Teigen — there's even a nod to the game in the Rick and Morty Season 4 opening credits — thanks to a quirky premise where players take control of a goose trying to annoy the hell out of some townsfolk. To celebrate the game's one-year anniversary, Untitled Goose Game is not only coming to Steam and itch.io, but when they launch on these platforms, also receiving a new update that adds a game-changing cooperative mode that lets two players honk around together.

On Tuesday, House House and Panic announced that Untitled Goose Game would receive this co-op update upon the launch of Steam and itch.io versions of the game on September 23, 2020. The co-op update will be released across all platforms and storefronts, so you don't have to worry about missing out on the new game mode if you're on a different platform. iam8bit will be releasing a physical edition of the game for PS4 and Switch on September 29 to celebrate the one-year anniversary as well.

Breaking Epic Exclusivity — When Untitled Goose Game first launched in September 2019, it was only on Nintendo Switch and PC. Even on PC, the game was limited to the Epic Games Store as the titular Fortnite-maker had bought its exclusivity, causing some controversy. Still, the exclusivity didn't have much of an impact on the game's success as it subsequently came to PS4 and Xbox One in December 2019.

The game remained exclusive to Epic Games Store on PC until now. After one year and three days, PC players on storefronts like Steam and itch.io can get Untitled Goose Game. The version of the game that hits these storefronts will be fully updated with co-op too, so new players don't have to worry about missing out on anything.

Co-operative honking — While the new storefront is great, the addition of co-op will definitely be the biggest draw for many around Untitled Goose Games' one-year anniversary. This new co-op mode lets players go through the game's entire 3- to 5-hour story as two geese. It is not clear if any of the puzzles will change to accommodate this, but having two annoying geese at your disposal will certainly make some objectives a whole lot easier.

The second goose isn't identical either. It has a darker beak that's shaped differently. It even has a slightly deeper honk! The co-op mode does only support offline local play, so don't expect to play with your friends online.

The Inverse Analysis — While Untitled Goose Game isn't as relevant now as it was over a year ago, this update definitely has the potential to make this game impossible to put down as long as you have someone to play with. For a laid back puzzle-adventure game to get co-op makes for an amazing addition, if only to bring in new players who might have just enjoyed watching people play before.

While it's unfortunate that this mode does not support online play in the time of the Covid-19 pandemic, it is understandable as the game is made by a small team. It also cements this update as a great way to kill time with family or friends that have been enthralled by Untitled Goose Game's honking-good charm.