Ukrainian game devs on Russia war: "Staying out of it is no longer an option"

"Staying out of it is no longer an option." 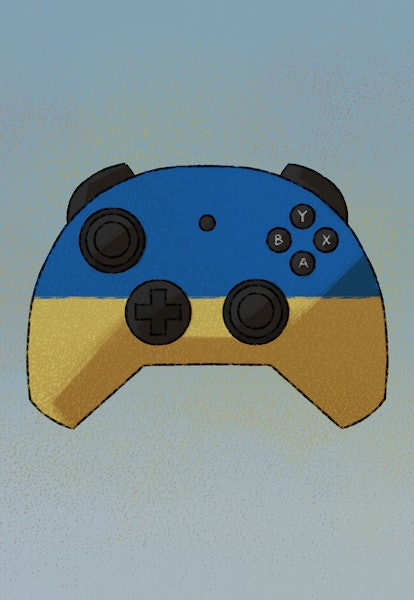 Leaving wasn’t an option for Alex Molodkin and his family when Russia’s invasion of Ukraine began on February 24, 2022.

Molodkin and his girlfriend, the two sole employees of the independent studio Weasel Token, live with his mother and grandmother. The pair is currently working on a charming puzzle game called Puzzles for Clef, but due to his grandmother’s mobility issues, it was almost impossible to consider moving her to another city.

“We're still in our apartment here in Kyiv. The only thing that’s changed is that now we live in our hallway,” he tells Inverse. “Outer walls and windows are very dangerous to be around, so we all decided to just kind of spend our lives there.”

Puzzles for Clef is a light-hearted puzzle game, with a story of “sisterly love.”

Their daily life currently consists of sleeping and following as many news sources as possible, in order to keep up to date with the location of attacks and bombings. Molodkin has friends and family across the country.

Despite several rounds of talks, the war between Russia and Ukraine continues, with thousands of civilians in danger of being caught in the crossfire. Molodkin says the invasion expanded and escalated far faster than many people expected.

“When the whole world panics about the armies surrounding your borders, you kind of start paying notice,” he says.

It’s not just people. Companies all over the world are watching the situation in Ukraine closely, in some cases moving to limit Russian citizens’ access to social media and video games. Due to sanctions and credit card companies blocking transactions, Russian Steam users and developers have seen problems with payouts and purchases. On March 3, CD Projekt Red cut off all sales in Russia and Belarus for its Gog.com platform. The Pokémon Company also pledged $200,000 in humanitarian relief to help the people of Ukraine.

“It's not just politics anymore.”

Molodkin says the gaming community can also be an important resource for spreading awareness about the ongoing conflict. As Weasel Token, Molodkin and his girlfriend have written letters to Steam, encouraging the PC gaming storefront to isolate Russia in some way.

“We hope that as many developers as possible come out with the same effort,” Molodkin says of CD Projekt Red’s move to stop sales, “Obviously, we want Russian gamers to rise up as well, but unfortunately they just ignore the matter because as long as they have their games, they’re fine.”

There have been multiple protests in major Russian cities since the start of the invasion, and Molodkin says Western reporting about the lack of internal support for the war is accurate. But what complicates matters is that many Russians seem to be “defeated by default.”

“They don’t even want to try fighting against their government,” says Molodkin. “We see in the game dev communities, if it's a Russian Ukrainian community and not just Ukrainian, if you try to bring up the topic of war happening right beside them, they'll just try to shut you down. Because, ‘Hey, this is a professional chat. Let's get politics out of it.’ But it's not just politics anymore. Staying out of it is no longer an option, in my opinion, and the opinion of all Ukrainians.”

With the conflict unfolding in real-time on television and social media, misinformation has become commonplace. While some of this can be chalked up to trolls looking for a quick burst of attention, Molodkin points out that Russia’s “propaganda machine” is particularly insidious.

“They are painting us some kind of Russophobic Nazis. We've never been like that, we've never even been a bit close to that,” he says. “I've been speaking Russian for my entire life. Same with my family. Same with most of my friends. I can’t talk from the point of view of every Ukrainian, obviously, but for example, if we talk about the gaming industry, we've never cared about which country someone is from — Russia, Ukraine, Belarus. Connections in the industry are very intertwined here.”

Countries have been sending humanitarian and military aid to Ukraine, and Molodkin hopes they continue to do so. He recommends donating to the National Bank of Ukraine as well as the charitable foundation Come Back Alive.

“We understand that it’s a fine line that they’re walking to avoid going into a direct war with Russia,” he says. “But even if you don't send your soldiers into Ukraine, there are still many other ways to help more effectively.”

Molodkin and his girlfriend have been working on Puzzles for Clef since the start of the pandemic, but the way their life has been uprooted has made it impossible to get any work done. The puzzle game is intended as a calm, comforting response to the grueling challenges of the last couple of years.

“We just wanted to create this cozy and peaceful experience free of any dangers that people could just delve into, to kind of soothe the wounds and calm our minds,” says Molodkin.

The spirit of Puzzles for Clef takes on a whole new meaning in light of recent events, and Molodkin is hopeful that Ukraine and its people will overcome and persevere.

“We still believe that Ukrainians who face all the post-war issues will still find great pleasure in these peaceful experiences that we and other game developers create,” Molodkin says. “We just hope that these conflicts stop soon and that we'll be able to finish our project as soon as possible and release it into the world, so that people could just be a little bit happier, hopefully, after playing it.”