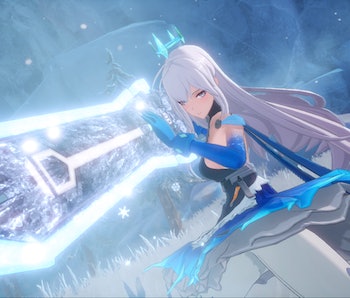 Tower of Fantasy, the long-awaited modern fantasy riff on the successful formula pioneered by Genshin Impact, launched on August 10. It features a highly customizable experience with perks that Genshin could stand to emulate — like picking up enemy drops automatically. But at this point, it can’t measure up to the gacha giant. There’s one grating issue that I couldn’t let slide: the visuals.

In the trailers, it’s easy to compare Tower of Fantasy to Genshin Impact because of their similar settings and art styles. The flaws start to stand out when you’re actually in the game, though.

I’m a few hours in, and I’m still intrigued overall, but unimpressed with the limp character models in the cutscenes. HoYoverse emotionally damages you with its animations. In Tower of Fantasy, you instead get the entertainment of watching the Wanderer (ToF’s wholly original riff on the Traveler) tumble on the ground like a ragdoll. Don’t get me started on the uncanny valley faces that barely move.

The voice acting helps, but it can only carry deadweight animation so far. Suzie Yeung plays Shirli, the upbeat blonde girl that you meet early in your adventure. She voices Eula in Genshin Impact and Yuffie in Final Fantasy VII Remake. Johnny Young, a.k.a. Crypto from Apex Legends, plays her aloof brother, Zeke. The two of them pulled off a heartbreaking scene between the two siblings, even with the stiff facial animations.

That was probably the peak of my introductory experience with this game. I’m not the only one underwhelmed, either. Redditor idokdok, who heavily criticizes the game in their post, has one of the most upvoted opinions on the Tower of Fantasy subreddit.

“Playing on a [NVIDIA GeForce RTX 3090], game feels like a cheap Chinese clone of Genshin. The level of polish is zero,” they wrote in their post. “For example, the images in the gacha menu — they are fucking pixelated (low res) like c’mon what they were thinking, that we are legally blind?”

Commenters weren’t as critical, but many still agreed that the game was “janky” at best.

“I think it's a fun game, and it's far from the buggiest game I've played, but I would certainly consider it to have a high amount of "jank," stuff that is not game breaking, but not quite right,” a commenter agreed. Others chipped in about the equally “janky” localization and low-resolution, too.

The world of Aida is visually striking and unique. However, it doesn’t compare to the polished look of Genshin Impact. It doesn’t have to, but it’s something to think about when many content creators and players are coming from one game to the other. Its shortcomings could be due to the team’s budget, experience, or player feedback, but it still comes to the same conclusion. This simply isn’t it.

Early testers shared concerns about Tower of Fantasy ahead of launch, including the lack of “polish.” Hotta Studio still settled on the original release date. Genshin Impact had a few bugs that developers patched after launch, but the graphics and animation weren’t as “janky” as in Tower of Fantasy. Overall, Tower of Fantasy isn’t a “bad” game — just not as “good” as fans anticipated.

It’s unclear if the anime-inspired MMORPG will really hold out as a long-time competitor for Genshin Impact. All we can tell so far is that players aren’t too impressed.

Interested in Tower of Fantasy? Well, you can download it for free. Note that you might need a few minutes to elbow your way into one of the very packed servers.

Tower of Fantasy is available for PC, iOS, and Android.