"one of the greatest things they've added to the game" 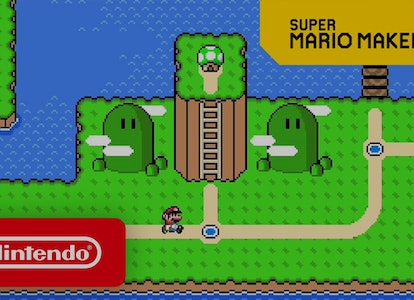 "This is probably one the greatest things they've added to the game," Super Mario Maker 2 YouTuber PangaeaPanga said in a reaction video Monday in response to what Nintendo has called the game's "final major update." Along with new power-ups and course parts, the update — which goes live for players on April 22 — finally lets anyone create their "own Super World in the new World Maker mode."

Everyone who's gotten hands-on experience with the new update ahead of time seems nothing short of ecstatic.

On Monday night, Nintendo announced this new update for Super Mario Maker 2, and for anyone that's an avid level creator, it's like a dream come true. To start, it adds a ton of new power-ups, with the most notable one being a Super Mario Bros. 2 mushroom that grants Mario the abilities from the classic NES game. This means he can pick up enemies, even flying bullet bills and chain chomps!

Other notable power-ups include the Boomerang Suit in the style of Super Mario 3D World and Super Mario Bros. 3's frog suit. All of the Koppalings are also coming to the game as bosses. But one feature rises above the rest: the World Maker.

As the above trailer highlights, Super Mario Maker 2's last major update allows players to create up to eight worlds. The world themes, level icons, and other aesthetics can all be customized, which will allow the most dedicated creators to make entire Mario games within the confines of Super Mario Maker 2, complete with individual levels connected by an overworld.

PangaeaPanga spoke highly of the update in his reaction video to the trailer, giving props to Nintendo for listening to fans. A world creator has been one of the most requested features by Mario Maker fans since the first game's release in 2015.

Even creators that don't make many levels, like Desbug, are coming out of the woodwork with this update and saying things like "I will make levels starting with this." on Twitter. Popular YouTuber Alpharad also joked about returning to Super Mario Maker 2 and creating "a whole ass video game" after this trailer went live.

Overall, the reaction to the final update has been positive, though some creators are frustrated with how Nintendo's post-launch support has worked. "That [Super Mario Maker 2] Update is so huge ... its amazing," speedrunner and streamer GrandPooBear said on Twitter. "I am pumped AF ... But the game would have kept its community around if it broke this update up into 4-5 updates over the last few months. Hopefully, [Nintendo] keep the series going, and damn I am excited for all the new levels to be made!"

The Inverse Analysis — As an avid Super Mario Maker 2 fan who plays the game a lot but doesn't create levels that often, my opinion falls in line with what GrandPooBear said about the update. These new features are all excellent additions. I'm particularly excited about the Super Mario Bros. 2 power-up, and I'll certainly be making more levels once this update rolls around on April 22.

But Nintendo's post-launch support for Super Mario Maker 2 up until this point has been haphazard. Instead of releasing a steady stream of updates on a regular basis, Nintendo has held new features for only three major updates have been released several months apart from each other — just long enough, it seems, for players to get bored with the game and move on to other things. Now, less than a year after launch, Nintendo seemingly won't update the game any further.

Super Mario Maker 2 still has an active community, so Nintendo could've benefitted by supporting the game post-launch similarly to how it has been supporting Animal Crossing: New Horizons. Many players, myself included, will be hopping back in for one last hurrah once this update drops on April 22, but how much longer will Super Mario Maker 2 last after that?