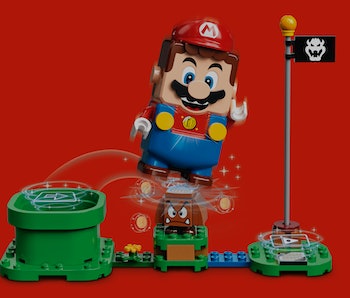 In a surprise announcement, Lego and Nintendo announced a collaboration on a new Super Mario Bros.-themed Lego set, except Lego Super Mario will be far more robust than the standard Lego set, creating something that feels like a mix between Lego, Super Mario Maker, and Nintendo's amiibo. Along with some robust interactive functionality, the results are also just adorable as heck.

The collaboration between Lego and Nintendo was announced Thursday and at least for now is entirely focused on the Lego Super Mario set. At the center of it all is a Lego Mario that can produce different sound effects depending on what parts of the set he interacts with. The set actually allows people to customize it and build their own levels, hence the Super Mario Maker comparison. While the flagpole is always the end goal, there are several different obstacles and enemies that can be placed in Mario's way. No specific dates were given for the release.

The collaboration was first teased on Tuesday, which has aptly been deemed Mar10 day by Nintendo, but the full announcement came Thursday with a trailer that features two children playing with different sets.

Nintendo is actively involved in this collaboration, with storied Executive Officier and Game Producer Takashi Tezuka explaining Nintendo's goals with the product. "I have always liked Lego products and how they help children use their imagination to play," he said. "The new product we created together with the Lego Group seeks to combine two different styles of play – one where you freely build the world of Mario and the other where you play with Mario in the very world that you have created."

Nintendo has a history of trying out unique gaming-tangental interactive experiences like this. While there was still a game portion for every Nintendo Labo kit released, the main focus was the ability to craft each prop out of cardboard. Lego Super Mario scratches a similar itch while adding in the collectible part of amiibos and the entertaining level creation of Super Mario Maker.

This set is both adorable and intriguing. While it's clearly aimed towards children, this set is sure to elicit interest from parents and video game fans, so this was definitely a good move for both Lego and Nintendo. That fact that this isn't a generic Lego set either shows that a lot of effort is being put into it, so it'll be exciting to see the extent of what this will offer. It'd be cool to see this extend to other Nintendo franchises, like The Legend of Zelda and Metroid, as well.

Lego Super Mario sets will be released later in 2020.

More like this
Gaming
8.16.2022 2:00 PM
10 years later, the Nintendo Wii's most underrated RPG is due for a remake
By Hayes Madsen
Gaming
8.14.2022 3:00 PM
You need to play the most exhilarating free game on Nintendo Switch Online ASAP
By David Grossman
Gaming
8.11.2022 3:00 PM
Everything you need to know about Kirby’s Dream Buffet
By Robin Bea
Related Tags
Share: