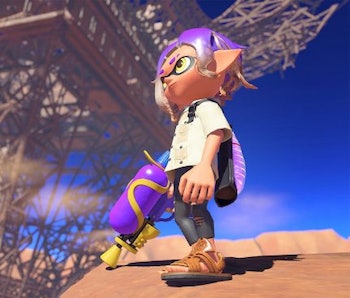 It’s time for another Turf War. The biggest surprise from Nintendo’s February Direct was that Splatoon 3 is coming to Nintendo Switch in 2022. A new trailer for the multiplayer shooter showed off a surprisingly dark game that’s set in a Mad Max-style wasteland.

For casual fans, the new setting may seem like a drastic change of pace from Splatoon 2’s bustling city streets. The colorful ink is still there, but multiplayer arenas are surrounded by dry deserts with decaying architecture strewn about. While it may seem shocking, diehard fans saw all of this coming from a mile away.

That’s because they’re the ones who are directly responsible for this disaster.

Let’s rewind the clocks back to Splatoon 2’s final Splatfest, the game’s recurring multiplayer event where players pick a side in a debate and battle to earn points for their pick. Back in July 2019, the game posed one last question to fans: Chaos or Order? All participants chose a side and fought for supremacy. At the time, it seemed like a fairly standard in-game event with a more existential twist that went far beyond Ketchup vs. Mustard.

It turns out that the stakes were even higher than players could have imagined, though there was fair warning. Prior to the event, Pearl (one half of the in-game’s news team) announced that she was invoking “Article 4” of Splatfest Law (yes, this is real). The rule states that the outcome of the Splatfest would take place in Inkopolis.

Splatoon 3’s setting and tone seems like a direct result of the Splatfest conclusion, as promised. Players wanted Chaos, and that’s exactly what they got. Now, there's a vast desert and upside-down Eiffel Tower in Splatoon 3 (some players have even theorized that the Squid Sisters are responsible for the latter based on an old Nintendo tweet).

Some fans are digging even deeper into the short teaser trailer to find more evidence of the Splatfest’s effects. One fan noticed that a weapon that was banned within the world of Splatoon 2 for being too devastating has made an appearance in the sequel. The gun, which appears to be an even bigger version of Splatoon’s Inkzooka, indicates that law and order are indeed dead. Now it's all chaos and lawlessness.

Is this what you all wanted? Are you satisfied?

All of this leaves us with one burning question: What would have happened if Order had prevailed?

Would we be looking at a cheerful and prosperous sequel set in a shiny chrome city full of advanced technology? Or would Nintendo have just found a way to justify the setting it wanted to run with either way (the game's lore seems to imply that a catastrophe was always imminent)? After all, Splatoon isn’t shy about offering some biting satire on capitalist structures (case in point, Grizzco). Maybe society would have collapsed just the same under an overly strict rule of law. Either way, we hope the squids have unionized.

Splatoon 3 is still quite a ways off with a vague 2022 release window, so it may be a long time until we get an official word about what exactly has transpired in Inkopolis. Until then, the game’s community will have plenty to do as they dig through the game’s surprisingly rich lore for more clues. Players should probably take this year to sit and think about what they’ve done.